Hello, I have a recurring audio problem (bug?).

Let me explain, when I work with a brand new image of the Zynthian system, I have no problem.

But when I modify parameters with the web interface, after a while and probably after some manipulations,
I get audio problems that I can’t understand and solve (parasites at the end of the musical note appear)

Here is the screenshot of the audio issue: 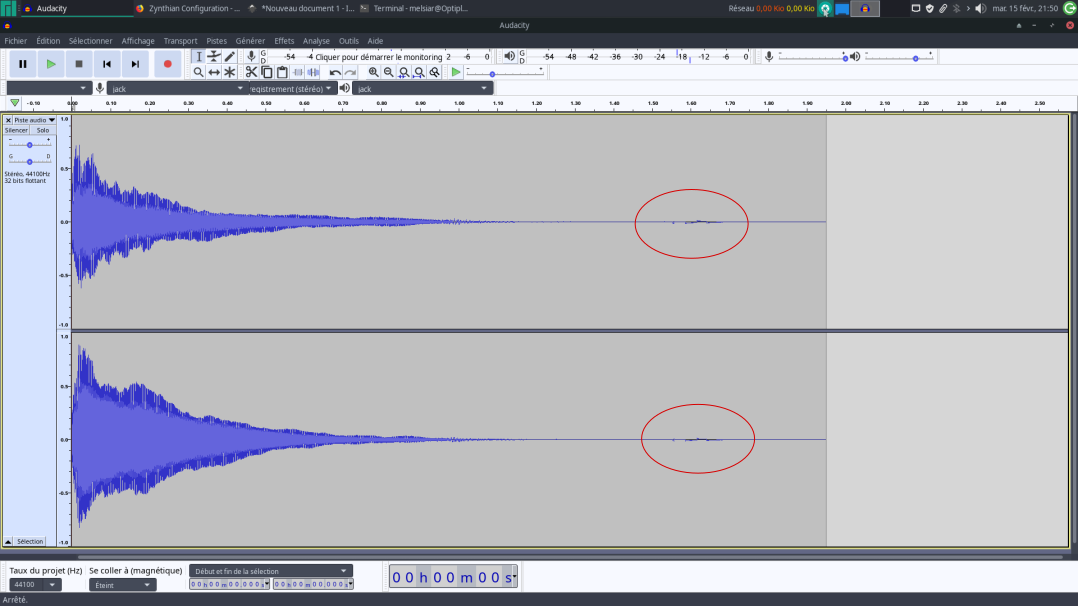 I have two identical starting SdCards.

Do you have an idea ? Because it’s really painful!

Thank you for your contribution

Thank you for your help Jofemodo.
I was trying to understand how to use the four buttons on the front of the Zynthian at the bottom of the display (I couldn’t find how to use them, but that’s another topic)

The only manipulations I have done are:
-Login to the system through SSH to change the root and pi passwords
-Upgrade the system by the web tool (I did not use the apt-get tool)
I checked unchecked options with the web interface in ui-options (now only the “Restore last state on startup” option remains active in this section)
-I turned on the wifi so that the Zynthian is connected to my wireless LAN

No, I don’t have an alarm indication on the Zynthian (XRuns) display.

Hoping to find a solution

We have seen issues with large SD cards. Are both of your SD cards the same type and size?

Hi Riban, thank you for your help
No it’s not the same card capacity, the other is generic low quality. The one that seems to be the problem for me is a 128 GB and the other generic is a 32 GB (I still have small crackles and XRuns from time to time with the 32 GB :/, maybe it’s because of à la carte quality? )
I’m going to install the system on a good quality 32GB SD card to see if that changes anything.

Perhaps is the A2 sdcard. I read somewhere that A2 cards are not recommended with RBPi…

I use sandisk ultra 32GB in many zynthians without problems.
But recently i bought a batch of bad sdcards and i waste 2 days until understanding the problem.

Hello, the problem seemed to come from the SD card used. I don’t know if it comes from the capacity of the card or the type of card used. In any case, for me the problems have not reappeared since I use a 32GB SD card V10 A1 (Generic card). I wanted to wait before telling you that everything is back to normal. Thank you very much for your help and as we say in France: Knock on wood so that this does not happen again