Oh please do share some stuff regarding this, the noise (

) and type of fan used and such

This is our most robust case, made completely from steel. It is ideal for environments that need something rugged or for people that don't like plastic.

is what it all fitted in so it needed a fan that would fit the mounting points in the case so it needed to be 25mm * 25mm
I bought a 5V one from amazon which didn’t have any fancy PWM connections or such like, and fitted it, directly to the 5v line in the Pi.

It was LOUD … :-(, disturbingly so…
so I connected it to 3.3V which was much more acceptable, but since I leave my zynth’s on most of the time this seemed a pretty effective way of chewing the bearings up pretty quickly.

So I added a BC108 in the 0V side of the circuit with the emitter connected to 0V & the collector connected to the ov side of the fan and drove it from GPIO 14 on the edge connector.
This was all assembled on a small bit of veroboard and joined to the appropriate pins with thin wires with heatshrink over it to avoid shorts and the GPIO pin driving the base of the transistor via a 680 ohm resistro.
Fire up the Pi and go into the performance section and enable the fan, setting the temperature to 60 degrees and hey presto, the fan starts up with the Pi then turns off as the green LED starts to flicker.
A soon as the Pi reaches 60 degrees on comes the fan, which I’m still connecting to the 3.3V rail. Not a problem as there isn’t any thing else connected to the GPIO header in this zynth ( a 60 W amplifier known as zynthian-amp4.local).

We are using it for piano and strings via MIDI and also for playing backing tracks for a wedding.
Seems pretty good, and the temperature settles around 55 degrees or so.

I wont put up the veroboard as it’s not the nicest piece of work, held in place using one of the Pi boards mounting screws, I’ve ever done but it fits in the case and works … !

Course, at the moment, once it’s on it doesn’t turn off, because the off temp is 50 degrees which is presumably as close to an ‘official’ Pi temperature as you might find.

Thus indifference to reopening it is turning it into a fan endurance test. There ain’t no fighting entropy !

So, at last a view inside the weird and wonderful of zynthian-amp4.local to it’s friends. . . 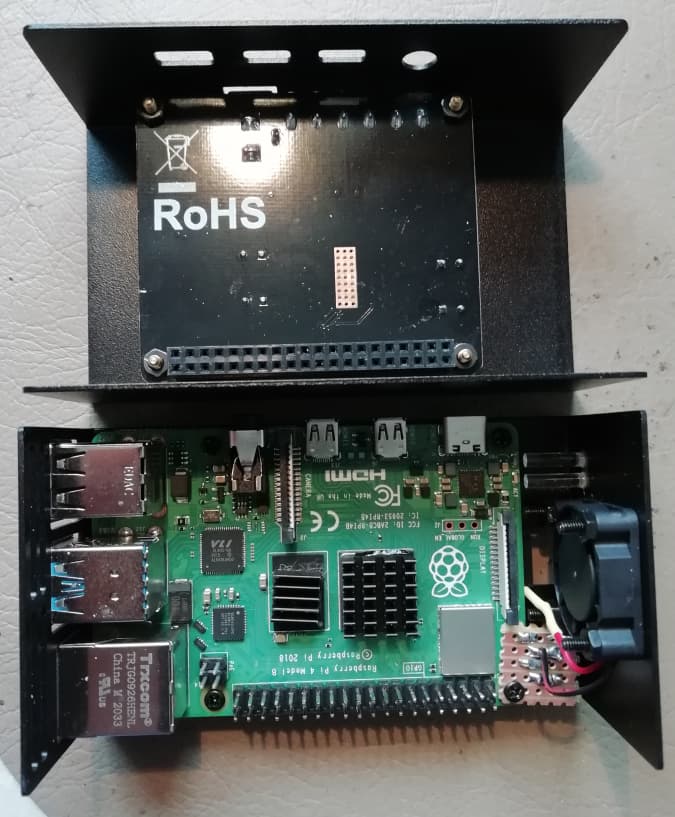 I intend to try to mount banana pillars on to the fan face as well to avoid the irritations of having to take a screwdriver along with it, but it’s nice to have a 60W zynthian which I can drive from an hdmi terminal and a mouse.

For those that tend more towards the wanton destruction end of the dark underbelly of zynthian development, I include a picture from the Ever expanding dungeons of shame for the following, harrowing picture of a BC108 living vicariously from a meagre 3.3v being made to work in unspeakable conditions by harsh unfeeling users, with nothing but a 680 ohm resistor to keep it company . . . . 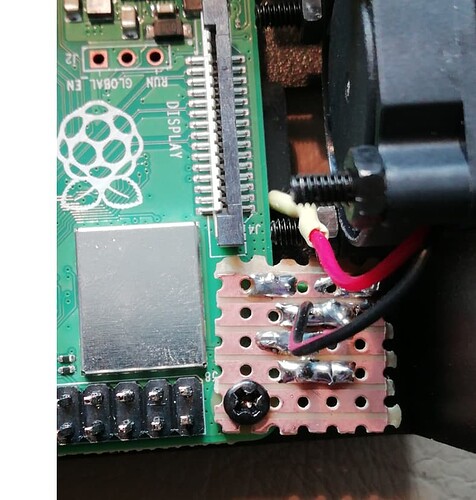 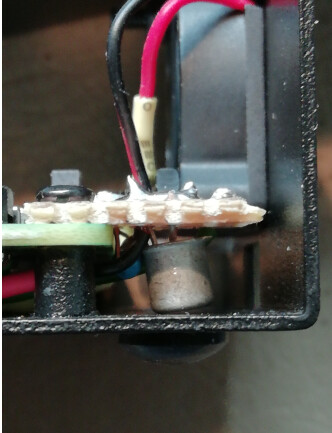 Course if I need an excuse to try it on 5V to see if we can actually reduce the fan life at the expense of some noise. . .

A raven slowly flaps across shot, caws once and exits stage left bared by a pursuit. . .

Well it seems that 5V gets it down to a temperature where it will switch off, after bringing it down from 60 degrees. Obviously it only needs to touch 50 degrees to turn off the fan, and let it cycle. I’ll let it amble along with no load on it ( No irritating MIDI or audio playback/record going on…) if it doesn’t need to turn the fan on then that looks pretty optimal. Well done Daniel

Don’t reckon the banana connectors are viable in the available space.
The next attachment would seem to be a mono guitar lead to USB as a pure input.
This has all the makings of a PA. . . .

Entropy, entropy, they’ve all got (it) entropy! 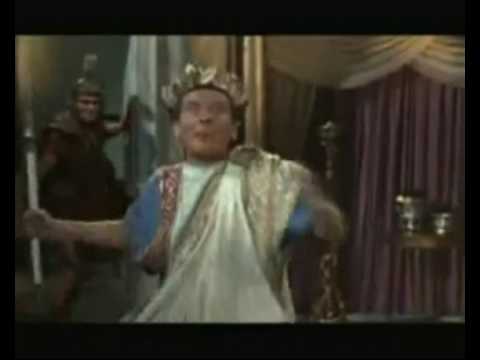 has Carry On made it to the outside world …?