I would like to present to you my Zynthian Mobile kit: 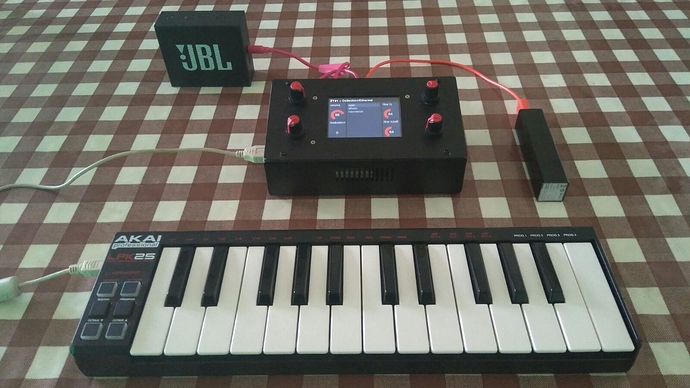 In the future, it would be nice if we could integrate the battery inside the case, including the charger circuit and a real power-on/power-off switch.

Also, a working headphones output should be added to zynthian. I tried to do it some months ago, but i didn’t finish the task.

Currently, i think the better option is using the IQ-Audio sound card:

It’s a little bit more expensive than HB, but a few euros doesn’t make a big difference and the integrated headphones output is a nice feature for zynthian. What do you think?

Absolutelly agree!!. I think it’s worth it for a few extra euros.

Nice! Would fit into my suitcase

The guys from HB havn’t answered for your question about some additional features (headphone out, line in)?

how long can you make music and what kind of powerbank (Ah) are you using?

The HB guys told me that they haven’t any plan for adding a headphones output in the near future, nor an audio input. But, if a number of zynthian users make some pressure, perhaps they could change their position.

However, they have offered a 10% discount for Zynthian buyers. I will try to get promocodes starting in September.

Regarding the battery, it’s 2600 mAh, and it can power the zynthian making sound for more than 2 hours (using RBPi-2, i’ve not measured the time with a RBPi-3).

@jofemodo,
It’s a great setup!I love it…it could use it playng live with my bands!
The earphone out could be a very useful feature.I saw that my HB has an output 3.5 jack.Is it the same lineout line of rca connectors I imagine…
In any case I will try to reproduce your setup,especially the metal box for zynthian, when my mechanical expert (my father) will be back from holidays…

I am not sure, but I think I have read that the lineout for the 3.5 jack is not amped - for headphones you need to add a headphone amp.

Like the mobile setup very much. Not that I am ‘on tour’, but being able to play in the living room or the backyard would be great. Like the IQaudio dac and the HP amp is worth the extra cost. As long as it is supported well; and seems it is, in the latest Raspbian
I haven’t started buying parts/building Zynthian as I’m still in a ‘honeymoon’ phase with my Pi2, very fun working out a workflow and setup. So this dac will be on the ‘list’

I finally completed my mobile box. A friend of mine built the lipo block. I had to step it down to 5V. I made no longtime tests yet. Theoretically it should last 5 hrs.

It should have enough amps but the red flash is shown sometimes. I will see, if it will be a real problem. 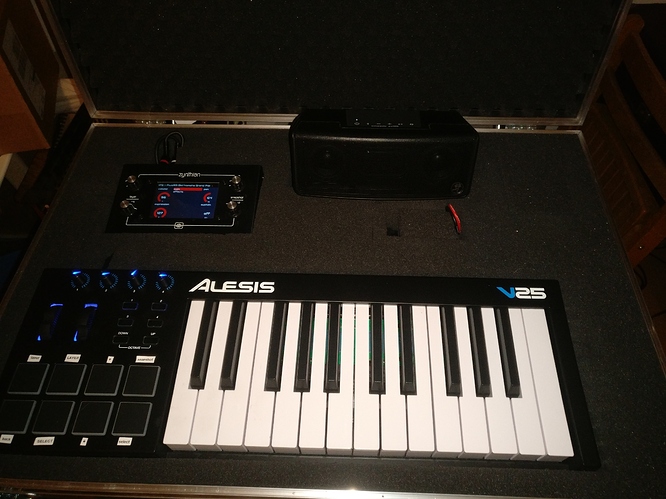 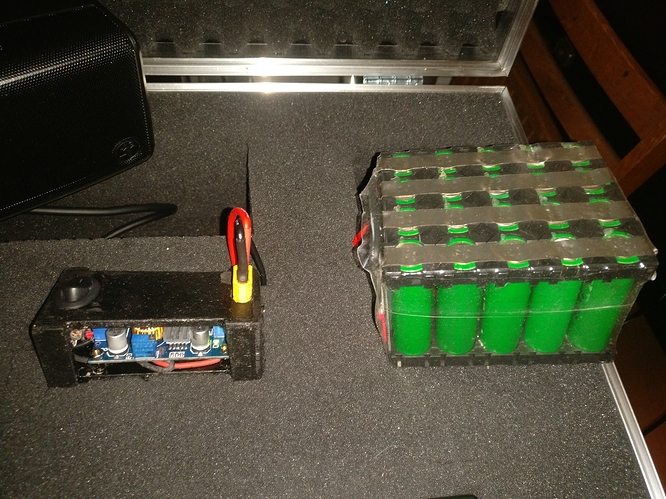 And all goes into the zynth on a usb connector…?

I do wonder if USB might have well stuck to 0.5 amps before Apple mugged it.

Do batteries prefer to be cool,warm or insulated?

Nice way to mount it all!

I bought one of these UPS boards. It comes with a 3800mAh battery that played a MIDI loop on several Fluidsynth layers for 3.5 hours. It has various LED indications of status plus serial status updated every second with input status, output voltage & current battery capacity. It also has a GPI pin that goes low when battery is about to expire.

The main purpose is to decouple the PSU from the Zynthian, allowing current peaks to be delivered without the need for an oversized PSU. It also handles temporary loss of power but could be used for off-grid performance like busking. I am yet to test duration under load with external devices powered, e.g. USB MIDI controller. I am sceptical of its battery capacity measurement which sometimes continues to grow for some time after power is removed but the GPI seems valid.

It is pretty cheap and it might be worth adding a software module to monitor this (and other) UPS. I will knock something up.

I just bought this one

Is that a built-in speaker? Cool…

Yes, and a powerhouse with 220V plugs. Besides powering the keyboard my second use case is powering the camper’s fridge when we arrive at the area too late and don’t get access to the infrastructure… happened this summer…

Forgive my necropost but I absolutely love the idea of a mobile Zynthian case. Has there been any work on this?

Various people have built zynthian rigs in photographic cases and the like. The issues are primarily about power supply. Batteries and UPS hhave been used but it’s an important aspect and that seems to set the overall agenda. The Pi itself doesnt really care as long as it get enough volts and current but it’s very easy to concentrate on other aspects forgetting this.
The other issue is the housing itself. If you build in a case to allow access to USB, ethernet, HDMI & Power supply you realistically have to build the Pi in a corner of an enclosure and carefully cut holes for these connectors or else you have to run cables and connectors which make things involved
Lastly there is access to the SSD slot. The early zynths require disassembly to allow you to change this which given a spare is a good idea, just in case, is a LOT of work in the middle of a set if you want to change it.

An honoury mention of straight to Amp zynth’s is probably in order. I use a couple of these as easy to install electric piano’s where a simple hifiberry amp card is used instead of an audio card. When linked with a battery pack I get about an hour and a half of 60W piano with no mains lead in sight.

Its so useful nobody ever notices it !

Have a look at Success Cases to get some ideas of the weird and wonderful solution people have produced.

Thanks @wyleu - I was reacting to @jofemodo ’s original post though. I think it’s a brilliant idea and was just wondering if anything came of it.