I was just fiddling about testing various synth and generators and I found that the following test tone generators all have configuration flaw in the Frequency control. Other controls like Triangle Slope work as expected.

Sine+Cosine actually doesn’t create any signal at this point regardless of the controls.

They all start with the Frequency set at 0.50 which represents full scale oddly. Any modification to this control results in the signal going to a subsonic frequency which in most cases is completely inaudible but pegs the levels in the mixer. CAREFUL, this might well destroy your amp or speakers so TEST CAREFULLY.

I know few people actually use these, but I figured you guys would like to know.

The Wave Terrain Oscillator is also broken. It creates no signal and has a blank UI screen.

All the ones in the generator menu work for me… 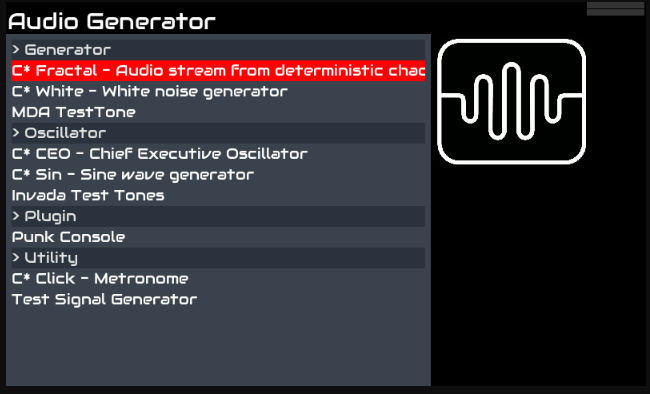 I suggest raising issues on the issue tracker for such problems. Most of this is upstream and for modules that are disabled by default. We try to curate a selection of good modules which are enabled by default out-of-the-box. (We could to better but it takes a lot of effort to test each module and garner user opinion.) Maybe we could have an indication of the plugins that have been tested to work, those that have (significant) known issues and the rest (here be dragons). That could give users an indication of how to approach each plugin and may help with filtering. This is an area where Zynthian stands on the shoulders of giants (using other developer’s modules) but also suffers from lack of quality control for some modules. (I have often raised this issue - we should be more circumspect in choosing which modules are added to Zynthian.)

I can’t tell from your first post which generator you were having problems with.

Wave Terrain Oscillator seems to be some kind of engine correlating its two audio inputs. It is not implemented in Zynthian to work that way and I haven’t figured out a useful scenario for it. It certainly isn’t a generator.

We try to curate a selection of good modules which are enabled by default out-of-the-box. (We could to better but it takes a lot of effort to test each module and garner user opinion.)

Perhaps an on board voting mechanism if people opt in…?

I know what synths you used last summer!!

You are correct in that I was wading into uncharted waters by enabling some of the unlisted generators.

These are the ones I enabled that don’t work properly.

Any adjustment to the Frequency control sets the output to dangerously subsonic. I’m glad I tested with cheap headphones. So, just for equipment safety reasons those should either be fixed or probably removed completely.

I also tested Sine+Cosine which didn’t put out any signal that I can tell.