I have an LV2 plugin looper that I’ve worked on for another platform. I’d like to offer a form of it for this platform, but the major stumbling block is being able to display current status on the front panel. Has anybody looked at UI modifications that would either place control outputs on the display or allow custom messages to be placed on the display?

Nice to meet you and welcome to zynthianland!!
The UI you need to show is similar to the LP2?

Redesigned LP2 mini looper based on the redesigned LP1. BACK ORDERED: Orders will be filled as soon as parts are available.

Could you send a wireframe scheme or some screenshots of the desired GUI?
Could you share a link to the LV2 source code or, if not free software, a binary version for RBPi that we can test?

lv2 plugins can already show input controls on the LCD. What exact information do you need to convey?

I simply want to know how complex the looper’s UI is, what kind of controls it uses, etc.
And remember to share the LV2 for testing.

lv2 plugins can already show input controls on the LCD. What exact information do you need to convey?

I haven’t compiled the plugin on the platform, yet. I’ll work on it this weekend. Mostly I just want to get basic status information on the display. It is hard to use a looper if you don’t know if it is recording, overdubbing, etc. Also, this is a multitrack looper. So, you need to know what track you are currently working on.

Wonderful!! I think we need a dedicated UI for enjoying a good looper integration on zynthian, but we could start testing the plugin with the generic UI we already have. Could you send the LV2’s ttl files so we can take a look to the defined control ports? Do you have some screenshots or wireframe design of the GUI you would like to implement?

Do you plan to make available the source code?

Could you send the LV2’s ttl files so we can take a look to the defined control ports? Do you have some screenshots or wireframe design of the GUI you would like to implement?

Here are the current TTL files. No reason that these can’t be changed though:
lp3-basic.ttl (13.3 KB)
manifest.ttl (406 Bytes)

I don’t have a specific screen in mind, yet. This is my first venture into plugins and this particular plugin is targeted at the MOD Dwarf which has LEDs and a screen layout unique to it.

Source code is not available, but I will release a free version of the plugin and likely an upgraded for a small fee version.

Source code is not available

What a pity! I hope you change your mind about that some day. Amazing things happens when you open your sources!!

Finally got the plugin compiled and installed on my Zynthian. I was excited to see support for Gtk in the UI source code until I realized that it is only enabled for remote displays. So, as I expected, the input controls for my plugin are available on the UI, but none of the output information nor the Gtk UI are available. It would be really nice if some custom output were available to the plugin on the UI, but I’m not seeing that the UI code supports that. Please feel free to correct me if I’m wrong.

You are right, and not. The current “controller” screen that is used for engine control doesn’t have any "viewer, but it could be added. Displaying feedback from LV2 plugins has been already done on zynthian. For instance there is a proof of concept of a “spectrum viewer” that takes feedback from a LV2 plugin and displays a real-time spectrum bar graph:

If you could render you viewer inside a tkinter frame, using canvas or widgets, similar to what it’s done on this example, we could put this frame in the central area of the control screen, replacing the list of controller pages, that now would be shown when clicking select.

Or you could create a totally custom UI, not using controller screen at all. but currently, it must be done on tkinter.

If you decide to go one of this 2 paths, don’t hesitate to ask @riban or me. We would try to help you, of course!

Could you send a capture of your LV2 GUI so we could have an idea of the kind of info/feedback you want to show?

The following are two apps that I run on a computer to control the devices. Obviously, I can simplify these for a smaller screen. For this plugin, there are 4 tracks. I want to show their status (playing, stopped, empty, recording, overdubbing) which can be done through color, words or images. Additional information such as feedback, position, length and volume are nice to have, but not critical. A marker to indicate the current track is needed which can be done graphically or through text. 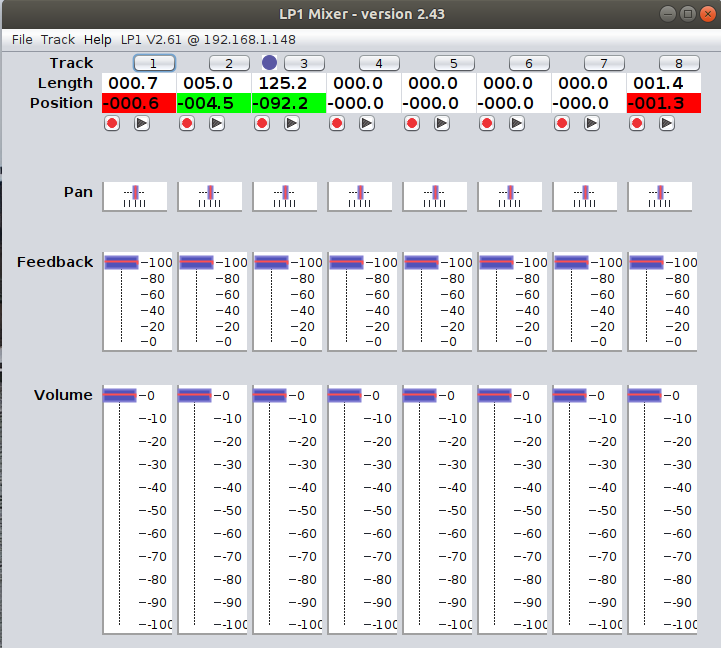 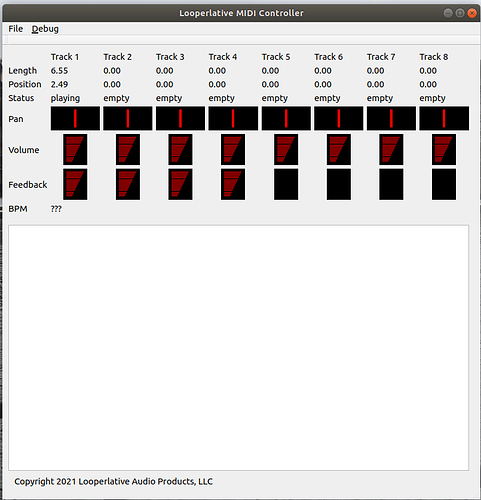 OK! Clear enough! It’s close to the zynmixer UI. Have you tried the “testing” branch?

I haven’t pulled the testing branch. I’ll take a look.

I get that the autoeq gui is executing a monitors command command to jalv to get the values of the output ports. I can certainly do that as well as all the information that I need is provided through output ports. I haven’t searched, but I’m wondering how this gui is associated with the correct plugin. It would also be nice if the gui could be delivered with the plugin instead of as part of the global install.

I’m working on a mecanism for associating extended gui with pluguins, so you can include the extension files Inside de lv2 dir.

It would be really cool to display a tuner in the UI. Currently one must use X42 Instrument Tuner and view on VNC which is suboptimal for a gigging guitarist! I had thought of allowing display of the plugin GUI on the main display for some plugins. Such a solution is full of challenges like display resolutions, navigation, accessing GUI elements, etc. X42 tuna provides output ports so @jofemodo’s development would be an excellent way to present this plugin’s output. I can’t wait…

I’m working on a mecanism for associating extended gui with pluguins, so you can include the extension files Inside de lv2 dir.

Fantastic! That would be perfect.

BTW, the sound quality of the Zynthian is excellent. I look forward to it being a viable platform for looping.