Doing my usual every 10 year thing of getting my head around home theatre tech for a friend, I looked into what Dolby Atmos means in terms of home theatre receiver and speaker setup. But during the research, I came across Dolby Atmos specialty headphones which then lead to the Dolby Atmos via software on Windows and iPhone rabbit hole.

The first two are not really accessible to me to play with at the moment and iOS requires a subscription to Apple music so that left the Windows Store Dolby Acess app (free demo for a week, US$14.99) which seems to add a spatial codec and EQ to your normal headphones. 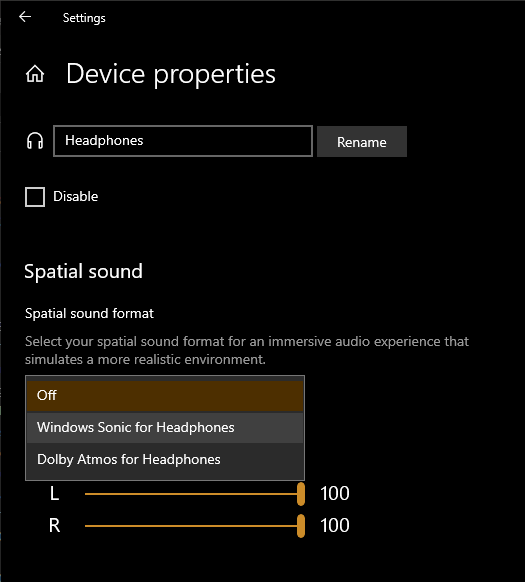 I tried it out on Windows 10 using a 5.1 DTS Master Audio Bluray Aliens (1986) and random YouTube I listened to this week (a mix of interview audio, instrumental and vocal music) with my preferred clipon headphones Koss KSC75 and was reasonably impressed.

My general feeling is that it is probably cheating and mixing a bit of each stereo channel into its opposite to create the spatial feel. It also seemed to better blend the 5.1 audio in a more balanced way … vocals up front, sfx more detailed and separated from the vocal track.

It could be just a better mix and EQ too. So its probably not as the creator intended but it also was not an unpleasant experience in clarity and how open the sound felt.

I would be interested to hear anyone else’s thoughts and experiences.

Unexpected consequences. I did not realise upgrading my audio hardware chain would reveal the need for a time machine to go back and fix all the fuzzy 1986 recordings I own :>

I also learned that “remastering” to some actually means compressing the hell out of the old recording so it sounds like you listening with your head underneath a pillow .

Linus tech tips did a reasonable video covering of "surround’ headphones which confirmed my thoughts on surround software (Dolby Atmos and DTS Unbound) and good headphones is probably the better solution.

I did a fair bit of looking into wired and Bluetooth audio. While headphones support many newer codecs, driving hardware like desktop, phone and console operating systems lags behind. I did find that even a hack like me was noticing Bluetooth sound input lag of up to 200ms using my current cheap Bluetooth buds and Windows10 probably using AAC codec. This might have something to do with all the times I have talked over people on Zoom calls :>

I decided to try out Sound BlasterX G6 to have a common wired hardware experience across my various platforms (desktop, console, hometheater receiver, Kronos). I might go for a Fiio BTR5 which offers Bluetooth connectivity in the future. What the DAC’s offer is some limited processing of sound from simple EQ to virtual surround (aka subtle reverb and smart stereo panning FX).

As far as headphones have gone, they have been something I have neglected for a long time. Probably the best solution for me would be the Sony WH-1000XM4 as I do like a bass focus but an equal first in most receives are the Bose Quiet Comfort 35II with a more linear detailed approach. There were also pretty good things said about the wired open backed Sennheizer HD600 and the slightly lesser HD599.

I ended up getting a really good deal on the Bose QC35II (they can be used wired with the noise cancelling off) and Phillips SHP9500 (a cheap(ish), open backed, reasonable reference) and through my process of researching heaphones, a totally random but rave review of a A$20 set of TaoTronics SoundLiberty 79 ear bud just had to be tried for the hell of it.