How can I get the Helm arpeggiator to be exactly 120 bpm?

Or any other bpm for that matter.

BPM are the number of quarter notes in a minute, so in the UI, set BPM slider to 120 bpm and frequency to 1/4 (with “Tempo” subsetting). Or… I didn’t understand the question

Í can only set the bpm when I am recording or playing a midi recording.

If I rephrase my question; if I am receding a song in my DAW and want to sync the delay/arpeggio to the song how do I do it?

Zynthian is really only handing MIDI file playback (and recording) onto other programmes to do the work . . .

In this case from the zynth code …

So the process actually doing the work is jack-smf-player using -r of 63 as the default playback speed. . . 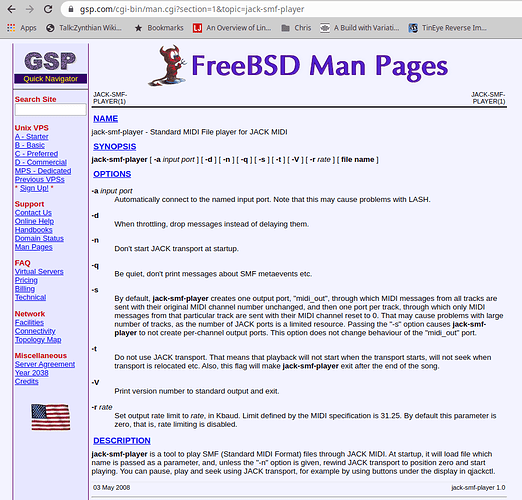 We find that all that is doing is getting a C library to do the dirty work . . .

and from the bottom of that we get the actual information of what is going on . . . .

So the complexities of what you are describing are probably overworking a simple MIDI playback tool running this library.

without a clear idea of precisely what you are trying to achieve and what parameters you might want to alter in your set up, is what you are requesting.

) than routing information between external sources of control (nealry always MIDI) and the various engines it offers, which means you have basic controllable devices especially in the LV2 world that will probably be the way to control things.

The Zynthian MIDI recorder is a simple beast that is built out of a need to test the zynth. (MIDI test on Admin). The rpm feature is certainly useful but probably wont achieve clever acts of synchronisation. Quite how it relates to the Separate world of MMC MIDI control I don’t know ( perhaps someone else could illuminate this…?), but it was an interesting chase of a bit of the source code I hadn’t looked at in such detail for a while.

From the little bit of playing I’ve done with it this morning. I reckon there is a need to allow each midi file to maintain it’s own default Tempo speed as it all gets a bit confused when you have multiple MIDI files and start playing around with tempo BPM, but as I said above this isn’t very surprising. . .

as to quite how much functionality we want to squeeze out of this particular tool. . .

The Audio recording is in a similar position.