I don’t like my RPi4 running near 70C in the Zynthian v3 kit case so I’m going to add a fan.
Is not that hot most of the time. I did add a heat sink right from the start. Nevertheless, cooler is always better.

There is a 2-pin header on the top of the Hifiberry just behind the left channel output as shown below. I’m sure you can’t arc weld with that output

but I assume it could handle 200mA or likely less for a small fan. I can’t find any reference to that header in the data sheet.

Does anybody know or have any of you hooked up a fan or other load to this header? 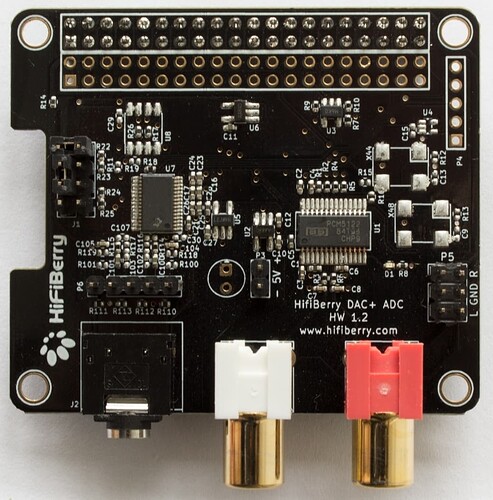 Maybe just give it a try and see what’s happens.

But I’m surprise: they are no crystal oscillators on the HifiBerry

The fan I’m installing pulls around 65mA @ 5V with the series dropping resistors I put in to slow/quiet it. I’m sure those headers can handle that.

That Hifiberry 5V header output worked fine as expected. I used a metal nibbler tool to create the hole for the fan which resulted in a terrible looking hole so I decided to mount the fan externally to cover it up. You can just see the edge of the jagged hole behind the top of the fan.

The fan is operating in exhaust mode which promotes laminar flow inside the case and better heat transfer as opposed to the usually bad idea of pushing external air into a case causing turbulence and uneven heat transfer. It keeps the CPU around 56C under a load that would have buried an RPi3. I ran the PD generative-relaxing patch through a series chain of 2 Granulators, 2 echoes, and 8 reverbs! That’s a hefty processing load.

As jofemodo points out in his analysis of the kit v4 heatsink, you have to move the energy OUT of the box otherwise any normal internal heatsink will finally just radiate into a stagnant heat pool.

The fan is not running at full speed. I added a 30 ohm series drop resistor resulting in 3V across the fan which is enough to start it but also keep it fairly quiet. A full 5V on the fan would be rather loud but of course but it would keep things even cooler. I may try a different heatsink on the RPi4 CPU but overall it’s working.

I haven’t yet decided if I’m keeping the new knobs. I have a box full so I changed things up a bit. 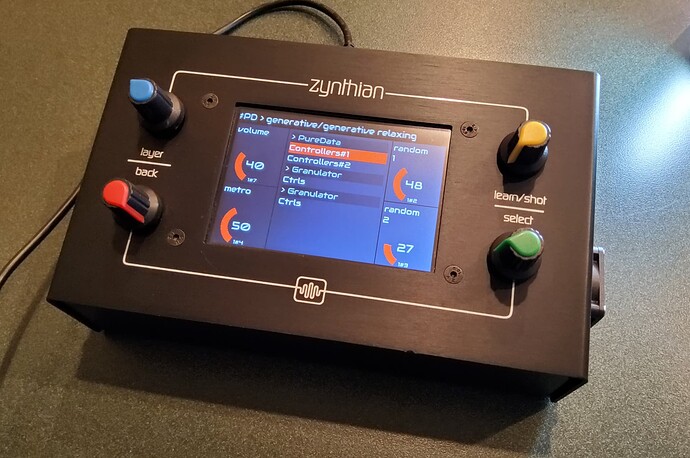 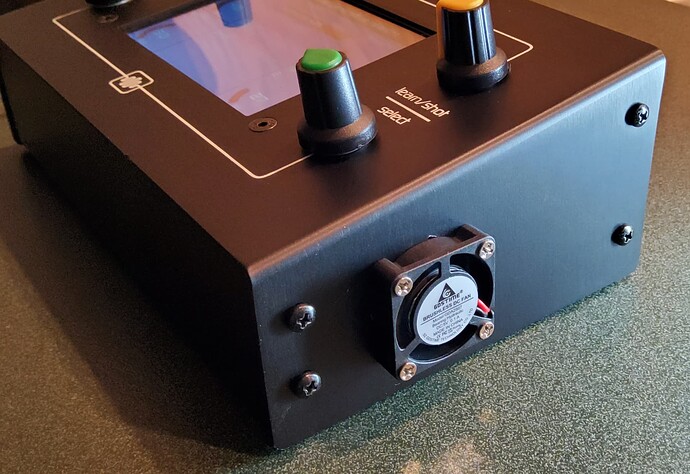 When I was considering adding a fan to one of my units (now a mothballed project) I planned to include a temperature driven speed control. The idea was that the unit in an idle or low resource usage state would run cool and not need the fan to run and when driven harder it would be making noise (as would the rest of the band) so the fan may be less objectionable. Also, hotter environments like stage may be less susceptible to the noise being an issue. You may wish to consider adding a bit of intelligence / control to the fan - or maybe it is just fine as it is!

My personal choice for knobs on encoders is to have no line as it serves little purpose on a continuous rotary encoder but I have found these to be challenging to source. I like your idea of different colours to more easily identify the knob (if you use it enough for the association to be made in your subconscious) and at the same time I do prefer a minimalist look with fewer colours. (@jofemodo may be surprised to hear after our discussions on colours in the UI!)

I totally agree on the intelligent control. That would certainly be optimal. I can’t make the fan much quieter, while it’s on, because it’s only running about 500mV above startup voltage of this simple DC fan. Linear control from 3V to 5V based on thermal load, with a decent bit of hysteresis, to avoid constant variation, would be nice. A PWM fan would be best but I somehow doubt I will go to the trouble unless the noise gets annoying.

Another thing I could do is to put rubber mounts on the fan to isolate it from the case which ends up acting like a bit of an acoustic chamber amplifying the fan noise.

As it is though it manages a rather stupid load… the PD generative-relaxing patch through a series chain of 2 Granulators, 2 echoes, and 8 reverbs, and remains in the mid 50’s. Quite good considering that load would be in the 70’s+ without the fan and my Zynth idles at around 49C.

As for the knobs, I agree the pointers are pointless

but most knobs in my collection still have a direction pointer. As for the colors, they certainly are not as clean an aesthetic as single color but the color code has its intuitive value.

After I stuck the knobs on I looked around the Success Stories thread and found somebody else had used the very same color code. At least I’m in good company regarding that choice.

I still may switch back to some other slick looking single knob type like these black chrome guitar knobs - oooh. 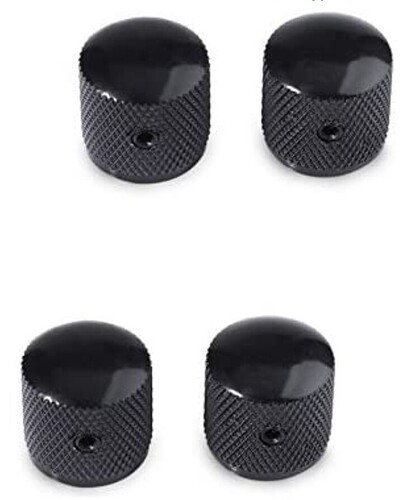 I used those knobs on my first Zynthian. You need to check that they fit the shafts. There are several different types and guitar knobs tend to be different (using the US sizing from the 50’s) which I think is a bit smaller.

I think this worked well for me because I could drill out the insert to the right size for my encoders.

Yeah, I was wondering about that.

As for the knobs, I agree the pointers are pointless

but most knobs in my collection still have a direction pointer. As for the colors, they certainly are not as clean an aesthetic as single color but the color code has its intuitive value.

Provides the GUI webconf config with 4 colour settings to upset the purists…!