How to play 2 different synths simultaneously

Hello everyone!
I have 2 midi keyboards connected to the Zynthian both of them using USB.
Now I would like to play two different synth sounds simultaneously, one using the first keyboard and the other one using the second keyboard.
I configured the Zynthian in Multi-timbral mode and I created two different layers (midi channel 1 and midi channel 2) with two sounds.
I’m able to play just the synth sound on channel 1 with both keyboards.
Is it possible to do what I’m trying to do?
Could you help me configuring the device for accomplish this?
Thanks a lot!

Presumably one of the keyboards is the M-AUDIO…?

What’s the other one? 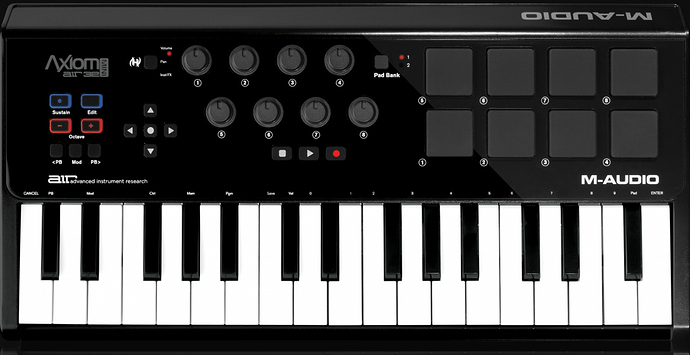 You need to have each of the keyboards on different MIDI channels really. There isn’t an easy way if both keyboards decide they want to be on channel one. . .

But if you want to remap a board from one channel to another you can do the following …
Which MIDI channel does it transmit on, when it starts up? Because we can use MIDI mapping in the webconf . . . 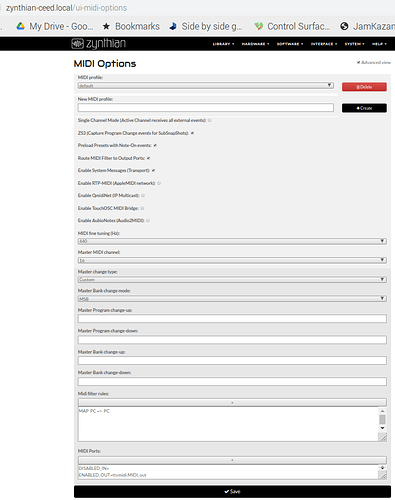 The MIDI mapping takes place at the bottom of the MIDI page in webconf, but do make sure you turn on advanced to see it !!!

Press the Plus symbol under Midi filter rules:

and you can change a channel to another channel …

Problems come with the second keyboard if it ALSO transmits on the same channel because there’s not really a way to separate sources by USB Device.

So your first concern is to work out a way of making sure the two keyboards occur on different MIDI ports, and that s probably down to some almost always Windows based set up programme supplied and downloadable with the keyboard itself.

and don’t think we wont want a

It’s possible, i actually do this.

Put your zynthian in multitimbral mode.
After this, you have to read the manual of each midi keyboard, probably your keyboards are set on channel 1, change this.

So i think you don’t have to change something in the zynthian,but you have to configure your keyboards.

The “global” MIDI channel is the default MIDI channel over which Axiom sends MIDI messages. Because this is a global setting, it applies across all memory locations, overridden only by custom channel selections for controls in MIDI Mode.

To set the global MIDI Channel:

I had remembered you were having trouble with the mode…

Thank you guys!
I will try to figure it out following your suggestions.
I’ll keep you posted about the results.
Cheers.