I threw away my organ expander modules

Work has destroyed my ability to do anything recently but the studio got rearranged, and selling the Nord Stage made room for a cheap Yamaha HS-8 that I’d bought mostly 'cause it had a CVS-10 and MDR-3.

Anyway. HS-8s are kickass MIDI controllers. My Zynthian’s been sort of orphaned as I wanted to write an in-depth review and lockdown/stress derailed that, but I’ve also never really found a space for it in terms of controllers/when to play it in an already fully-featured setup.

Until the HS-8 came into the main studio:

All of a sudden it’s the main synth I’m playing - looking forward to making some bespoke pedal/upper/lower presets for it. The bracket needs some refinement but it works… 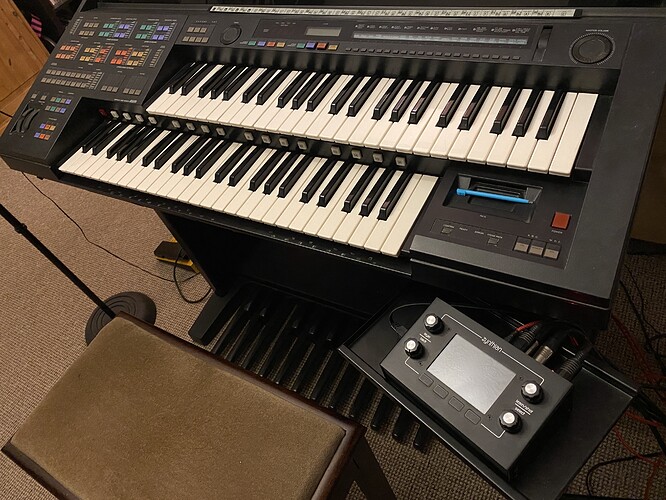 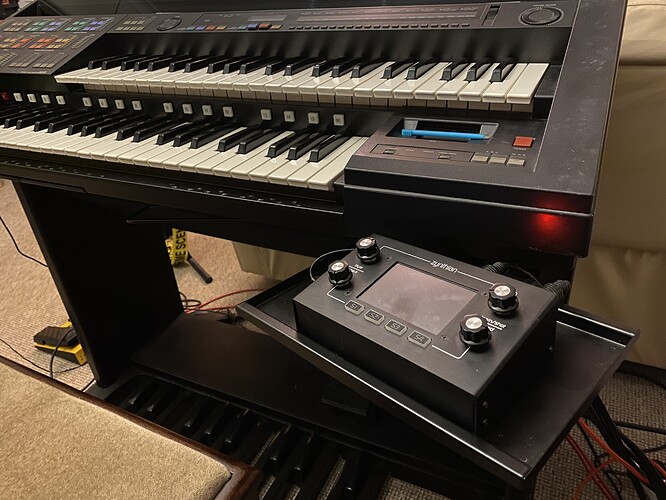 And when do we get our

The review is probalby 40% done, I shot all the build and made notes and also got the new audio board (I’m going to buy the CV and new Zynaptiq as I have many modular things to play with), but depression meant it’s been a struggle to meet my 9-5 job. A curse; I got away from a poor relationship, and the freedom to play with my synths returned, just as a broken and defeated heart took away the energy and motivation.

A video of playing with the HS-8 probably this weekend; I’m now learning how to make the best snapshots and layers for what I want to achieve; the HS-8 can do MIDI on 1, 2, 3 but the predefined pipe organs map pedals to 4, for example - and the HS-8 is a bit dumb in that regard, I can remap MIDI channels to 4 & 5 for the manuals, but it resets after power cycle and it’s purely for adding more tracks to the MDR-3’s recording.

Also I am a terrible musician, but at least I’m enjoying being terrible with no-one else to judge me 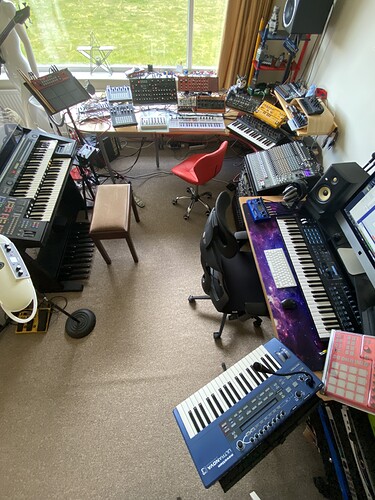 “HS-8s are kickass MIDI controllers.”
Is there any decent ideas we can ste/pay homage to in this regard?

HS-8 against Zynthian? Not even a comparison. That’s the whole point, the HS-8 is 1988 FM+AWM organ tech, it is cheese personified, it is not without merit but it is outdated tech of the highest order. That’s why the Zynthian is now the brain - and if I had any time/skill I’d give the HS-8 a proper brain transplant with a Zynthian built into it.

Though UI designers could learn a lot from the roll-log /hardware/ switch matrix. That’s VERY clever and an idea that I’d love to see come back.

As a controller you get 2 keyboards with velocity and aftertouch, pedals with aftertouch, a sustain knee control, a pitch bend and mod wheel and a clock source with a big red LED tempo display. In theory you get two expression pedals if you can find the second pedal option, too.

It needs some figuring out - like, sustain is a physical control but the MIDI response to it depends which manuals you’ve assigned it to on the control panel, and I am not sure EVERYTHING I’d like to be MIDI is - there are extra controls on the foot pedal for (I think) start and fills on the drum machine side, for example. But with the right memory card I believe the HS-8 can also be a MIDI sequencer.

Definitely need a Korg microKontrol or Nocturn or something that I can fit on the organ somewhere with a row of MIDI CC generating knobs,

I Tawt I Taw an antenna.

Just to bore y’all senseless, but also to confirm…

Yes, the antenna is a Theremini, the autotune of theremins (but also MIDI).

There’s a bunch of obvious stuff in the pic, but the things I love are the KeyStep Pro, Mooer Ocean Machine, Circuit (Mono Station hasn’t gelled), Elektron model:samples and Neutron when I get into it. Theremini gets played very rarely, I hardly touch it…

… plus there’s a MIDI guitar setup just out of shot and fretless bass.

My studio/toys past & present are all on Gearspace after I lost track of AudioFanzine.

I have been somewhat chaotic, unwell and so forth over the past year, so my… er… everything ran out of steam. However, just had surgery and some time off to recover, so I rebuilt my home studio.

This had been a disaster area of ‘too much gear and misery’ for a long time, and nothing was quite working. And like, WOW, that pic has the Ultranova - I forgot I’d even had that.

So I need to catch up on the world of Zynthians as mine’s been barely touched during this work/stress time, and I need to finish the final stages of my studio setup.

Which is the big question:

The way my studio works, I’ve configured it roughly as:

All the Behringer USB-connected synths go to the iConnect MIDI4 and are on different channels, and are broadcast as one session.

The Yamaha HS-8 and Keystep Pro broadcast as another session.

There’s a third broadcast session for a Roland Fantom. Since it has 16 channels and I rarely use it, that’s more of an afterthought.

What I want is for the Zynthian to automatically connect to the “Organ Keystep” session when it boots up. It doesn’t appear to be doing it automatically and I’ve searched a few times but have only really found people asking about the Zynthian being the initiator. For sequencer control from Cubase (or even to Cubase or other patched MIDI devices) it’s fine just connecting to the Zynthian as a session, but I would really like the Zynthian to power up and immediately be connected to the controller keyboard’s port initiated from the MIDI interface.

Once it’s done I also need to look into how to configure the pipe organ and Hammond patches for MIDI 1,2,3 layers - Hammond seems to default that way, Aeolus I found a bit trickier.

But this ‘auto connect’ part will really help me if I can do it, whether thats a command line/conf file edit, or something else?

I have used RTP-MIDI via my Mac as a patchbay between Zynthian and ethernetMIDI sessions and it works great.

I’ve also now (finally) found the mental capacity to wire in my patchbay and the Zynthian gets to be an effects unit as well. 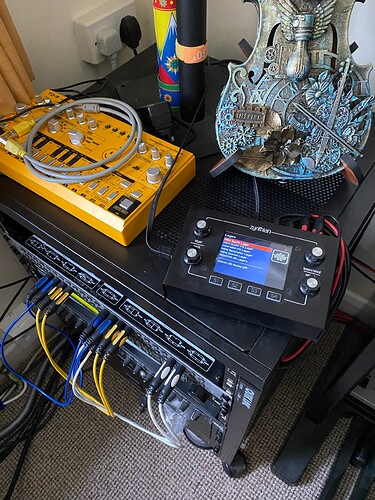 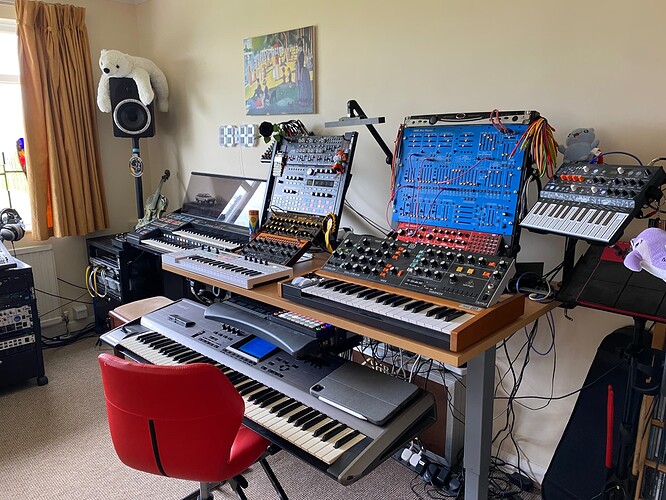 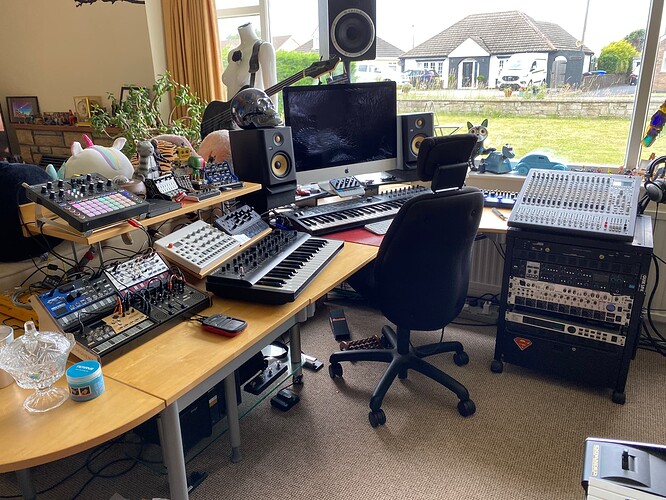 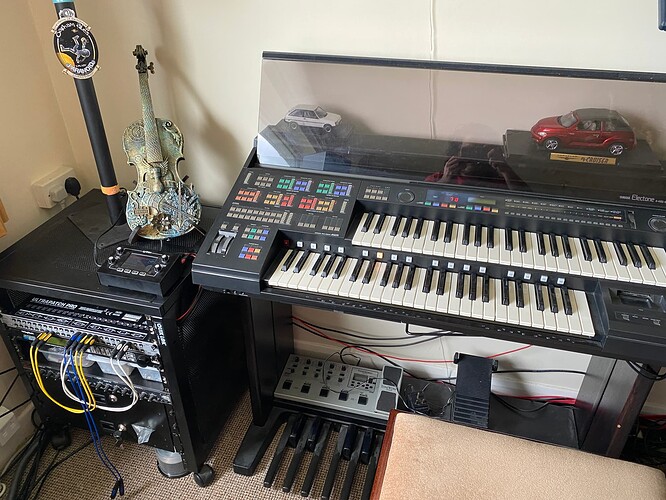