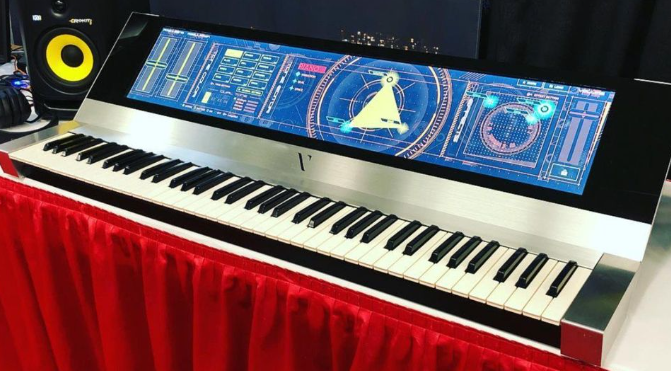 I’m curious, but what was the program on the tv, it looks like some kind of SF movie ?

I remember that, it was programmed using JUCE 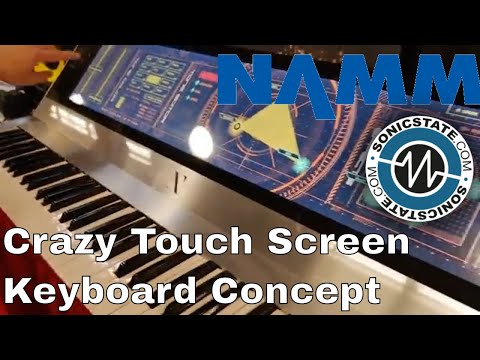 Rather nice but rather ironic that all you hear is a piano sample. It would be nice to hear what the interface offers.

And once the novelty wears off, we remember that touch screens actually suck for controlling instruments while performing.

It’s just a cost saving for the maker, it actively reduces functionality.

Have to look at the screen, can’t build muscle memory, no haptic feedback, gross.

Depends a lot on quite what functionality you need. As a device to reassure a techno phobe pianist who wants to see dots it’s magnificent and for providing set confirmation it would be excellent.
I’ve spent a fair while mucking around with zynths as solutions to various issues and it’s important to see what is and isn’t in scope when you are attempting to provide a Swiss army knife of components.
There has recently been some discussion on a Mini moog control panel, which I suspect represents a lot of people’s idea of the definitive mono zynth control panel. Make it polyphonic and you will diverge into prophets 5 versus Jupiter’s or oberheims with a vociferous underbelly of cs-80 fans. Nobody is specifically right or wrong but if we are to adopt an approach that can accommodate all then we need some base line functionality that would at least allow the visualisation of these different approaches.
Is the answer for control pots,drawbar, stops, sliders, encoders,faders, switches or mod wheels and with or without led rings or mechanised controls? Who can know without considering the application, but as a minimum we should recognise good and interesting designs from others to assist our thinking…

By the way has anyone got a CS80 I can borrow…?q

Have to look at the screen, can’t build muscle memory, no haptic feedback, gross.

And yet people learn to play the Theramin.

people learn to play the Theramin

Just because you can, doesn’t mean you should!

Touchscreens have little hepatic feedback which is a challenge designing some user interfaces but they can provided a lot of information in very intuitive ways. The massive wide screen displays didn’t come closer to demonstrating what it could be used for. The controls were so large that you could have done it all with a small screen.

A short while before I got my Zynthian, I stumbled across Zynaddsubfx, and ended up getting a laptop with 12" touch screen (sounds expensive, but it was not new; in fact its’ about 10 years old and cost me about a quarter of the price of a new Zynthian) to see how more direct the user interface would be if I could skip the mouse and point directly to the graphical elements. I still use the laptop whenever I want to edit Zynaddsubfx patches in Zynthian.

I do prefer knobs for editing, but using a touch screen is actually better than I thought. Especially with a complex instrument such as Zynaddsubfx, a knob based interface would either be huge or require a paged approach which sortof sidesteps our haptic memory anyway.

Personally I think that a one-to-one knob interface works the best up to the size of an instrument like the Prophet 5. Once you add a modulation matrix or other menu based item, the directness drops off.

It’s not a black or white type of thing of course. I thought the instrument in this thread looked interesting, but especially after listening to the interview with the designer, it’s very clear that this is a concept presentation, and the hard bit is ahead, designing an instrument sonically worthy of such a large control surface. I don’t know anything about the company, but unless they’ve done this mock-up to get backers, and really have a solid background in instrument design, I think they’re going to find it very hard to actually float this boat.

And they need to get the bend and mod controls off the touch screen and on to physical controls. Nothing fancy, please just give me pair of bend/mod wheels.

That said, it would be interesting to see the various screens of Zynaddsubfx laid out across the panel of this machine.