Due to pandemic factory slow downs/ shut downs, followed by hording, etc. electronic component lead times have shot up. Lead time may be dropping since the March peak, full recover might not be until some time in 2022.

The effects are broad, reportedly US used and new auto prices experienced the largest single month increase, due to a shortage of chips used in new car production,

Broadcom, the maker of the key Raspberry Pi chip has some lead times just short of 1 year. (this may be more in the Internet, Cellular communication field)
Semimedia March 23, 2021 Supply chain: Broadcom’s lead time will be extended to 50 weeks 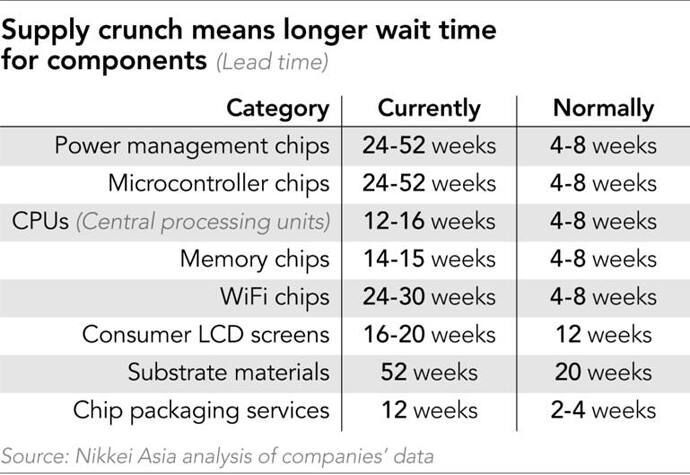 Limor Frield (Lada Ada) who went from making wearable electronics at MIT to running a $40 Million board making business in New York City, shared in this video, her process for finding substitutes for every trivial component . (At 20:48)

The US pandemic recover act includes an investment of $50 Billion in chip production infrastructure (as part of a make it locally plan). Equipment delays may cramp any real world results.

April article on the delivery delay in chip production equipment

The Raspberry Pi is included in this prediction of SBC delays.

In march an employee of an electronics store a few miles from the Brodcom corporate offices told me self serve policies were changed after the store suffered some sort of flash mob shoplifting loss of some $3000 in Raspberry Pi’s, employees were overwhelmed by the number of thiefs (I’m curious about where these boards ended up).

I was just on the site looking to buy a second Zynthian and saw that the V4 are out of stock. Are these things related? When will the V4 kit be back in stock? Thanks!

Yes they are related, I don’t know when they will be back in stock.

I was trying to buy onewire components and was quoted October…

I just bought a Raspberry Pi 4 (kit) from Rapid Electronics with delivery (at least within UK). Quite a good deal. Not an official PSU but it seems to work. Been playing with Raspberry OS but it locked up and I got bored so will try later. I installed some DAWs on it. Reaper menus render poorly! Anyway, if you are in UK you may be able to grab one. (Not a full Zynthian of course.)

Likewise a local retail outlet has only 8 gig Pi 4’s as well as some differerent sizes in bundles.