I am looking at using several different zynths together and to this end I’d like to Map different keyboards to different MIDI channels on the qmidinet network. 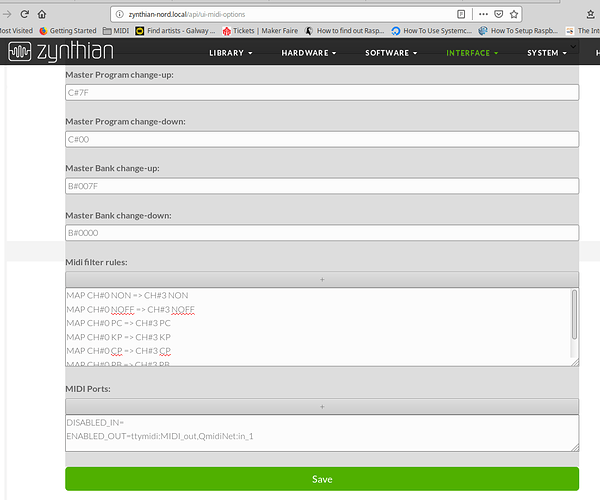 This then plays MIDI channel 4 on another Zynth…

I WILL BE RICK WAKEMAN at least until the first note get’s played . . . .

Why not simply reconfigure the keyboard to use Channel 4? The AKAI MPK Mini allows to have 4 different “MIDI configurations” that you can easily change.

Anyway, Zynthian Router currently doesn’t support “by-device” rules. In other words. you can not differentiate the events from different devices if the devices are using the same MIDI channel.

Implementing this feature is in my list, but it’s not a priority because most of keyboards and controllers allow to change the MIDI channel and you only have a real problem with this if you want to use 2 devices with same fixed MIDI channel (normally 1 (aka 0)), what it’s not very common.

Simply because if I configure it on the zynth I’m doing my config in one place not in multiple config programmes that I may not even have the right operating system to run in different (live) situations {I use Linux everywhere and don’t take a pc or mac with me).
My Roland a88 has no battery backed memory and has a function switch and keyboard key selection to choose midi channel so if one wants to set it to midi channel 5 say you have to know how to do this or your rig will come up on startup or after a power cut or device reset as MIDI 1(0). Great for me who likes technology complexity but ridiculously confusing for someone who just wants to use it as what it is a properly weighted piano keyboard and whose skill set is playing keyboards not configuring them.
This was really a thread to demonstrate you could do it and as it saves me the hassle of firing up windows to run the akai config programme then I’m fairly happy with it when it’s working with my pedalboard and my Roland all of which believe they have an inalienable right to hog midi channel 1(0).

I realise this is a slightly contrived example but it grew out of contemplating a zynth cluster as I seem doomed to consider a world where every light bulb has a zynth to control it.

and after an hour spent installing the AKAI MPK Mini editor I can report a complete lack of any success setting the MIDI Port of the device . . .

Is it windows 10?, Is it actully talking to the device?, Is it my inability to understand the programme? Is it wearing out the USB port from transferring the connector between the Windows PC and the zynthian…?

Whatever it doesn’t change the MIDI port.

I don’t know. Like so much of modern software it looks great but doesn’t have much confirmation that anything is actually happening … I’m sure it’s great if you use it everyday and indeed much of it is written by someone for whom it’s a major part of their life for three months or so but for the casual disinterested user it’s often frustrating and rather deflating. . . .
I would hate to be trying to get this working at the side of a stage in the dark with the rest of a band looking on . . .

Luckily I can sort it all out with a raspberry pi running a zynth !!

and it works !!!
Learn a few tools well

Maybe you can configure your mpk mini with this web tools https://gljubojevic.github.io/akai-mpk-mini-editor/

Hi @wyleu!
Of course, i understand your motivation and also think it’s interesting to have a 100% zynthian-based solution for this kind of scenarios. I’m pretty sure that the next iteration in the Zynthian Router will include “per-device” rules

And would you believe what I spent an hour debugging this morning. Why no sound on zynthian-nord.local…?

Obviously I had managed to configure it at some stage…

A post was split to a new topic: Drum Maps