This is my good old sc-88. When I load it into my device chain from my pc, I can throw gm at it on lots of channels and it plays them all.

On zynthian, if I load up an sc-88 soundfont with fluidsynth, I can pick one instrument from it.

Is there a way to make one sc-88 instance play multiple sound sources in the same way? I guess in a midi file the instrument setup is often in the opening notes for the channel.

If this is possible, GENUINE ROLAND SOUNDCANVAS FOR SALE or SWAP… WILL TRADE FOR FULL ZYNTHIAN DEVICE OR EQUIVALENT ORDER FROM SHOP.

I have various other old school sound devices which I would consider releasing .

Meanwhile, I have just replaced the PI 2 I started out with, for a PI 3b+.

I’m still tuning my Behringer u-phonia and just ordered a sm57 to plug into it.

I have a case, io hat and rotary’s on their way in.

I am a genuine convert, but there is still so far for us to go before I have the device of my dreams. 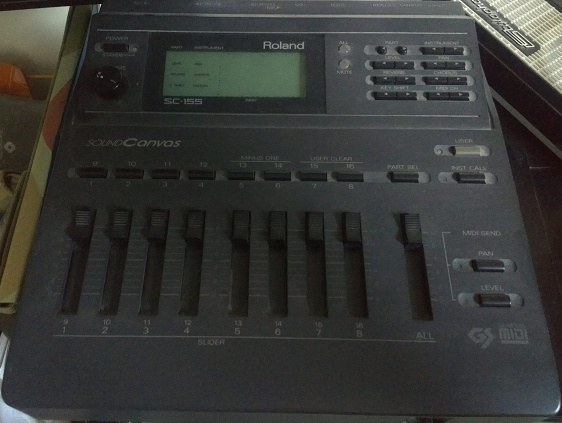 I intend to do similar for my old SC-155. Fluidsynth can load many soundfonts including any of the many GM and GS soundfonts out there. Several are much better than the soundCanvas, e.g. less noisey. I had previously posted (but cannot find today) about the effort required to create individual fluidsynth layers for each MIDI channel. I don’t remember if there was a solution for that but it is certainly one way to do this, i.e. to add 16 layers, one for each MIDI channel. That does use up all your layers though so may not be desirable but it is currently a limitation of Zynthian that it only handles 16 MIDI channels.
Fluidsynth has similar effects so you can enable chorus and reverb and adjust individual channel levels. (If you want a standalone unit then see my fluidbox project.)
I intend to add similar controls to my Zynthian as I have on my SC-155, i.e. a fader for each channel and some knobs for controllers, like a channel strip. I think having a mixer style control during live performance (and during studio use) may improve things for my workflow. It presents the Zynthian more like several instruments. In fact, looking at it now I see that I am borrowing many design feature from the SC-155 including the raked display. I may limit myself to fewer than 16 channels - I need to see how big it ends up. I am building it modular so I may be able to adjust that - depending on the chassis construction.
There may be an SC-155 joining your SC-88 on ebay

The only way to handle more that 16 midi channels is to either filter by which device is connected, which would only be do-able on usb midi devices, or move to MIDI 2, which something as old as the SC-155 wouldn’t be able to handle anyway.

The only way the sound canvasses would have been able to make it sound like more is by doing program changes on the channel to change the sound. Which you can also do with a GM soundfont on fluidsynth if you turn off the subsnapshot functionallity.