I’ve been jamming a little bit with the SooperLooper LV2 plugin included in Zynthian SD images. It’s super fun and you can mount a little loop-piece in 5 minutes.

My setup is really simple: 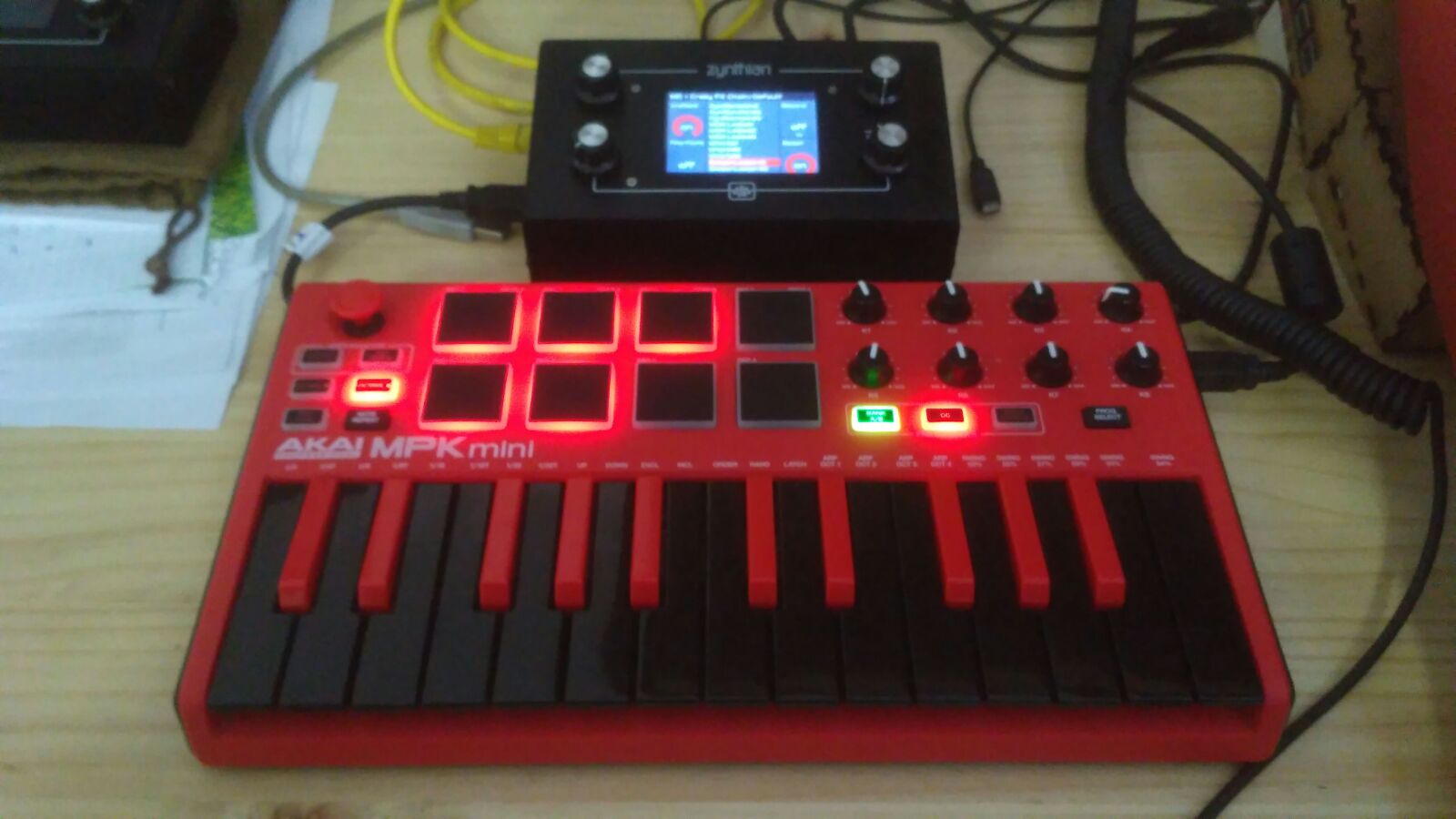 I followed these simple steps:

Here is a little example of my jamming session:

Nothing special, but funny!!

After this, I think that a full integration of SooperLooper could be a great add for Zynthian … what do you think?

Nice what you’ve gotten with SooperLooper and a bit of inspiration.

Now an stupid question (sorry for that)… where can I find SooperLooper? I’ve updated twice my Zynthian v1 but I cannot see it.

@smespresati, currently SooperLooper is available in zynthian as a LV2 plugin that you can use for building MOD-UI patches. The "Crazy FX Chain” MOD-UI patch is an example and it’s also included in recent SD images.

In the near future i plan to develop a full integration of SooperLooper, that would add more looping features, as “multiply” mode.

Some of you want to share a SooperLooper jamming experience?

And here is another one:

The beginning is not quite fine, but the resulting atmosphere is interesting …

Come on, @zynthianers … none of you want to share a SooperLooper Jamming Experience?

And more … i’m having fun with SooperLooper

@jofemodo, I am looking forward for SooperLooper integration into main interface, because it is quiet complicated to use MOD-UI in mobile setup (meaning no laptop and lan cable). Wifi hotspot way is working, but there are some interference with Audioinjector, so I stopped the experiments for now.

As soon, as there will be at least the basic integration, I will be among the first to make demos

Although i have plans for a SooperLooper “main interface” integration, currently you can use the LV2 version with the MOD-UI engine. No need for laptop, cables and so on while performing. You only need to use the MOD-UI interface for building your pedalboard. After saving, you can use it standalone, my friend.

All the demos in this thread are made without any laptop connected to zynthian. Only a “AKAI MPK mini” keyboard and in some cases, a foot-switch/sustain pedal.

Spent quiet some time with the looper tonight - great staff ! Unfortunately couldn’t map any control buttons to midi hardware (nektar gx61 and evolution mk-225c keyboards) - midi learn didn’t work for me yet in MOD-UI. But the controls from the main unit work great - Thanks !

When something worth sharing (and made live) appear - will share !

Curious … could you explain to me how do you (try) do it? MOD-UI midi-learning procedure is quite “strange” and perhaps you don’t catch the “(un)logic”

Anyway, what about the Zynthian UI midi-learning? Did you try it?

One question, does SooperLooper record in mono for now ?
Tried to connect stereo presets to it (Audio => MOD-UI) and the immediately become mono.

Also switching back from any other layer to SooperLooper using Layers button kills the loop.

It was working just fine before the update. May be a bug ?

Edit: my bad Reset was ON.

OK! The current SooperLooper interface/integration is far from good … sorry, i will improve it ASAP

@jofemodo, I am very gratefull for your efforts and with SooperLooper in particular and have no reason to complain.

Have no doubts, that in a few years zynthian might evolve in the way we all will be sirprized

. It is already much more than expected so please, don’t loose your creative spirit and inspiration !

Did you get working the Zynthian UI MIDI learning with SooperLooper?

Yes, everything works great, but making a simple usb foot controller to make it more convenient.

Controlling from nektar keyboard buttons doesn’t work for now - it sends ON value on key press and OFF when I release the button. Probably need to write a custom midi filter to make them work.

I’m currently trying SooperLooper. I don’t quite understand how it’s supposed to work.
I also have the AKAI MPKmini.
The first problem is that the Midi Learning doesn’t work. How can I assign the AKAI MPKmini pads correctly?

The other thing I don’t understand is how to use the SooperLooper. Even if I operate it via the display without the MPK mini, I can’t hear anything. How do I know something is being recorded? And how can I play it?

Looping is my catnip, I have a 10 minute overindulgence to share

The main sooperlooper has a gate so when you hit the record button it won’t start recording until you press a key, also you can load in pre-recorded samples ahead of recording, for which I tend to use drum loops. The lv2 isn’t packaged for my distro so I don’t know how it differs.

I tried SooperLooper now as well. I added an instance via Detailed view to the instrument.
What I find disturbing is that the Play has to be ON as well, when you try to record.
Mapping the controls to pads worked, when you define them as CC toggle.
There are 2 features I miss, @jofemodo

And we have an architectural issue.
I mapped my Alesis V25 being MidiChannel11.
I was thinking of recording the instruments on that channel and move them away to a different channel when done…using single channel mode btw…
BUG: after moving, the PlayToggle button still works in the channel overview. But when I go into the channel, it seems to remember, that it isn’t channel 11 anymore and the toggle doesn’t work anymore.
When going back to channel 11, the SP loop is reset as well.

Actually I want my keyboard controlling the toggle after those channel moves.
I think an absolute midi learn that takes the channel into account is not feasible.
But I can imagine a different behaviour for the master channel.
So assuming I programmed my toggles to send the cc as master midi channel, the learned midi commmd should survive the midi channel move.

What do you thing?