Is it possible to add two midi input ports?
I’d like to add additional knobs with arduino based midi controller and my idea is to connect it internally to RPI and then additionally have an input for external midi controller as well (keyboard).

Is it possible or how have you guys solved something like this?

Zynthian uses the Raspberry Pi UART to implement its physical 5-pin MIDI port. Extra ports may be added using USB adapters. I use a midiman MIDISPORT 2x2 which works well. Be sure it works with Linux which will be most class compliant interfaces. The MIDISPORT is not class compliant but the required firmware is installed on the Zynthian. Other proprietary interfaces may not work.

That’s good to hear. I have a midisport 2X2 I haven’t been using and I think it just found a new home.

MIDI supports up to 10 independent instruments or controllers on the chain. But you do have to have a MIDI Thru port somewhere!

) but this is the only mention of this old MIDI interface on the forum.

I was pleasantly surprised to find that Zynthian supported my old Midisport 2x2. As Riban notes, without the firmware load following USB connection, the 2x2 is just a brick. So now my headless Zynthian RPi3 has audio and MIDI! 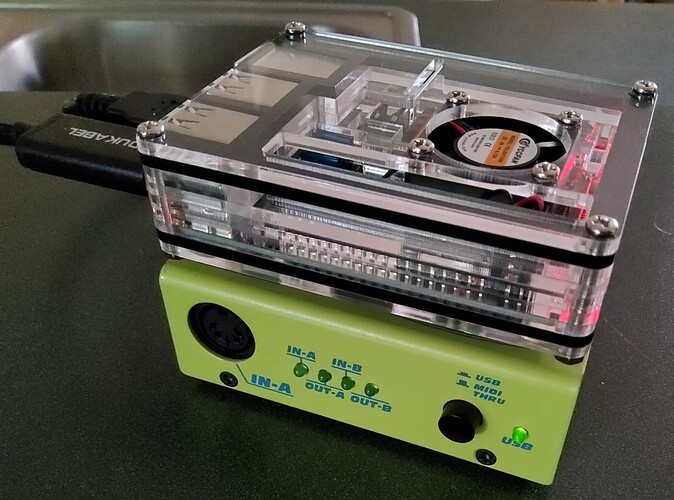 Yep! I have one which is why the firmware is installed by default now.

Another approach to multiple midi inputs would be a hardware ‘midi merge’ device placed before the Zynthian midi input, for instance the Kenton Merge-4
https://kentonuk.com/product/merge-4/

You are better off using a USB MIDI interface which gives more flexibility and configuration within Zynthian and can be cheaper, e.g. Miditech MIDIFace 2x2 or better value Miditech MIDIface 4x4.