I’m probably missing some simple step… Is it possible to set up midi CCs to control the audio recorder? It looks like keys on a qwerty keyboard are mapped to play/record/stop etc, but can this be done with midi messages instead?

A korg nanokontrol 2 fell through my letterbox the other day and I’ve started making the zynthian do fun things with it. However, I’ve not got the play/record buttons to do play/record yet, so ultimately that’s what I’m trying to achieve.

Are you running testing or stable?

Currently on stable. Should I take a deep breath and dive into the world of testing?

Worth burning a new ssd for testing but keep the old stable one handy, and backup using the facilities in webconf.
A fair bit is in the process of changing and this is in testing.

The new mixer exists in testing… 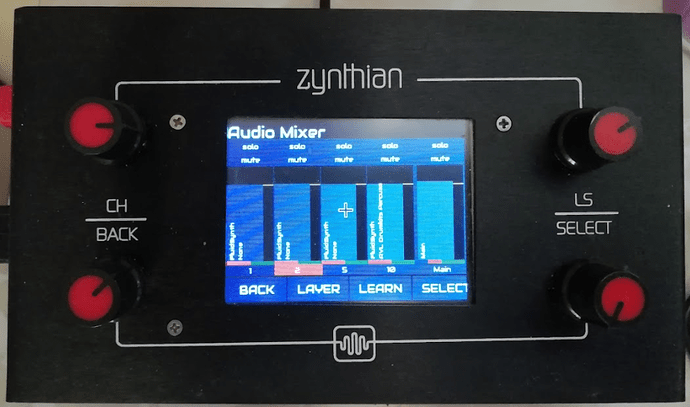 but as yet the nanokontrol2 doesn’t control it.

I had a play about with testing branch and could only get the new mixer screen, like in your picture above. I also managed to nerf my ‘good’ SD setup my totally ignoring your words of wisdom to dive into the world of testing on a muckabout SD rather than a good one. Live and learn

. Fortunately I’ve mostly reinstated my good SD now and am in the process of making a crash test dummy card too.

Navigation has previously been described but basically:

There are other shortcuts that we will document soon.

@jofemodo we should probably have pages in the wiki for testing that migrate to stable documentation with each release.

Aha, the problems were all on the user side of the UI, so to speak

Thanks for pointing me in the right direction!

Am now getting to grips with the new navigation…Incidentally I’m using Audiowide font size 18 for the interface and the top left title text is partly hidden behind the next part down in the UI. I’m using a 800x480px screen.

Still not too sure how to map a midi CC to the transport controls rather than a letter from a text keyboard. Should I replace the shortcut key in webconf with something? some way of doing midi learn?