I plan on using the Zynthian as a synth for drum triggers and other percussion midi inputs, and I would love to have a visual metronome on the Zynthian’s screen for proper tempos. The first goal would be able to specify a given bpm for a specific patch, and have a small blinking icon at that tempo when the patch is loaded. A stretch goal would be for the Zynthian to get MIDI clock sync information from an input, and display the blinking icon according to that tempo.

Searching past postings, it doesn’t appear anything like this exists, and I’m willing to do some experimenting to get it to work. Are there any resources I could leverage to start? Any advice or guidance would be greatly appreciated.

Do you have experience with this kind of metronome? I’m a percussionist and from my point of view, eyes are to slow for getting a good sync. Ears are a lot faster when compared with eyes. Also, display refresh timing will add extra delay, and worst, jitter, to the metronome’s “flash”. If you want a visual metronome, i would consider using a led connected to a GPIO pin.

Anyway, you are very welcome to experiment with new features

I have zero experience, to be honest, but a healthy curiosity. This would be for a live application, not recording, so being off by some amount (even 1-2 bpm) would probably be just fine. I think using a GPIO-based LED is a good idea, although I would be interested in gauging the performance of the screen first. Any advice for getting started?

Funnily enough I was thinking about something similar for bell ringing because we have one or two ringers who are of an age where their hearing is a little overpowered by the sound.

We don’t have a good tap tempo device ( as far as I know) and that would be another useful thing, but as with so many other aspects of zynthian we have LOTS to do . . .

I just tried yesterday with a simple Android App. Using only the optical signs was not enough (for me!). I can only hold the beat when hearing the click (using headphones).

Mimicking the pendulum of a mechanical metronome may help one anticipate the the beat better than a single light. A multi light simulation would be an interesting experiment. 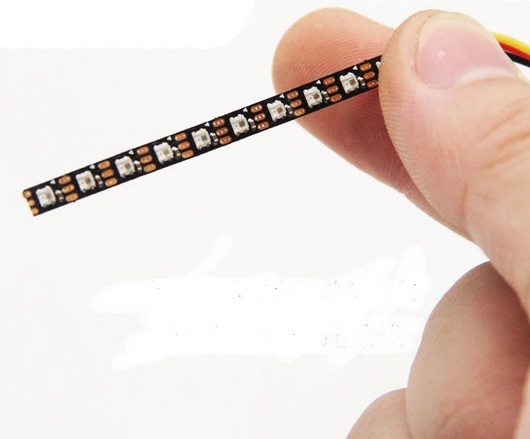 A high priced, shrunk down version of a smart RGB LED strip with 1 timing critical signal, commonly used with Arduinos. (auto syncing to a simple beat input would be clever.)

For completeness:
This 16 LED strip (no longer available from Chippernut) cost over $1 per LED delivered.
(These fast update APA102 smart LEDs are suitable for spinning POV image generators) 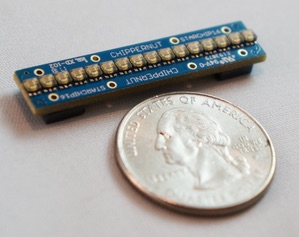 The little video shows a rainbow animation, a grow from center metronome pattern and a 2 color swap scheme.

I found a 2mm ‘smart’ RGB LED that can be hand wired with no PCB (for those with miniture model or SMD repair experience) they have Castilian leads instead of the typical surface mount pads. tacking them face down on strong tape simplified the job (I used double side heat sink tape)The part# is WS2812C 2020 (electrically compatible with the 1st strip shown above) Using a more universal currency for size references instead of a coin.

Programmed in Python, driven by a a tiny Arduino like board , “itsybitsy M0” with Circuitpython. 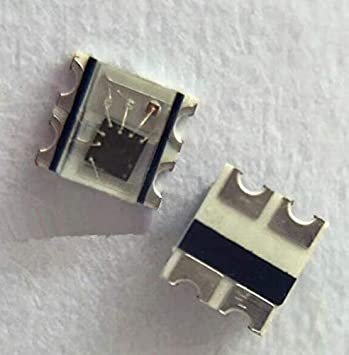 Below is more or less the wiring scheme I used, (changed the direct soldered In/Out pads to interlocking arrangement) 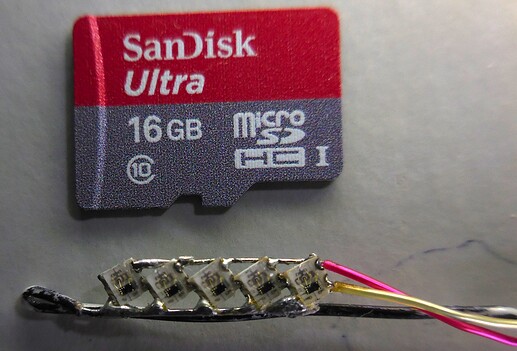 5 LED Wiring Scheme1200×816 234 KB
The WS2812 (Neopixel) LEDs do their own pwm modulation for 16 million colors, they are arranged in serial strings using 3 wires. They are most commonly found in 5mm chips soldered on flexible strips, or in oversized 7mm Christmas light style wired strings, used in those massive installations with thousands of animated lights.
1 Like
MaxMaxis June 11, 2021, 1:44am #7

A couple of Other Visual Metronome Examples
(Yea, an audible metronome is best when circumstances allow) 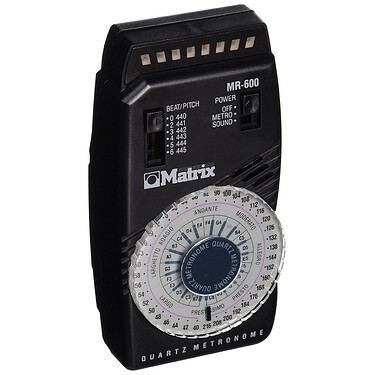