It’s time to improve the parameter mapping of this wonderful synth engine. Probably the more complex and powerful standalone engine integrated in Zynthian. 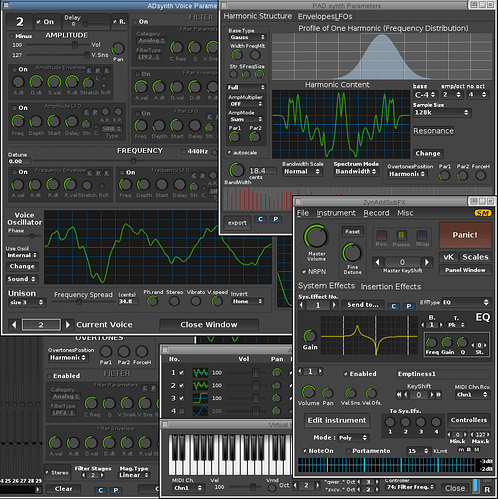 I want to implement an algorithm that parse the “preset” structure (XML or OSC tree) and builds a map of “interesting” parameters, organized in several groups.
I would appreciate any comment or idea, especially those who have some experience with ZynAddSubFX.
If i have success in this task, I can assure you, fans of Synthesis, a lot of fun

Hi, don’t know if it’s the right forum section,but while writing a new topic, this old one was suggested as similar.
Would suggest to add (if possible) a “system effects” parameter page to zynaddsubfx engine .
Being the downstream effect chain, it will affect the overall engine presets. could be fine add some more customizable character to still existing sounds… what about it

Improving ZynAddSubFX integration is in my TODO list from a long time ago, but i don’t have a clear vision of how to do it, yet…

Regading the FX … perhaps the System Effects Chain could be configured from webconf tool (effects and order) and parameter adjustment from the Zynthian UI.

Also i like the ide of using “insert effects” (by instrument/channel), implementing an “add/remove/move effect” function in the Zynthian UI itself. This option is more complex, but i like it more

In the other hand, the first option could be used for filtering the output from other engines … so we would have a “Global System Effects Chain” … nice!!

What do you think?

It feels like it needs some broad categorised descriptions of concepts, The Nord Modulars address this by having a series of small modules that are mapped onto a 8 knob, 8 switch paged display, and then a navigation mechanism that can walk throu’ the selected elements. I would say it’s as much as you can get with 5 lcd 2 line displays. Mind you you also have the gui display of the interface so it’s really a live only requirement.

The 8 knobs seems a slightly better compromise of the problem than our four knobs but I have seen you planning a larger knob interface so it needs to be a multivalue solution anyway . . .

Working to an earlier theme and stealing the nord categories for consistency . . .

In the other hand, the first option could be used for filtering the output from other engines … so we would have a “Global System Effects Chain” … nice!!

… but i miss something, the system effects on Zynaddsubfx can be used for filtering other engines sound? or are you thinking about a downstream effector as a separate engine, always present at the end of chain but enabled or disabled on demand?.. (something like MOD UI but with audio plugins only…and maybe less cpu consuming)

Anyway i was thinking to system effects, 'cause till now (or i am wrong?) every engine, even being multichannel, must be loaded for each snapshot channel, included Zynaddsubfx.

Regarding Webconf, unfortunately i’m not very familiar with programming or something more complex than writing out a bunch of commands on terminal… but would like to try. How much is difficult?
[corrected] sorry, webconf is zynthian.local on web browser… never used

A post was split to a new topic: Feature Request: Panic Button in ZynAddSubFX and others