To war, against a noisy viral enemy with no whites in their eyes, our weapon of choice ... ISOLATION

With this hardware release, I am trying to standardise the analogue connectors for my sound cards. So that preamplifiers and other “skins” can be reused between products.
The end goal is also to have people design their own analogue skins and reuse them.

Made my contribution as well!

Been looking for that additional motivation to make a younger brother to my zynthian (as in better, and not more stubborn

Would the analogue skins be powered and if so how…?

Great, thanks for the backing!

Regarding power, I am creating a standard :

Basically, ±12V rails and phantom. There is also a dirty un-isolated +5V, which requires an isolation barrier if you try to use that rail. That rail ties to some GPIO lines for unisolated control.

alsamixer sees it.
But no sound with mpg123 test.mp3

Started qjackctl, no service running.
In the options, (default) as interface was still selected. Hence I chose audioinjectoris.

Do I have to stop a zynthian instance first? Does qjackctl not see it?

And we will have a little coding to do as well, @jofemodo.
The capture controls are not displayed, because they are integrated.

Our parser can’t handle this. Only the Master Left and Master Right are displayed.

4 posts were split to a new topic: Audioinjector issues

my issue is isolated related. It doesn’t work in raspbianos either. I wrote @flatmax already.

Matt and I figured that my card must be broken.
So I have time to tackle the next issues. 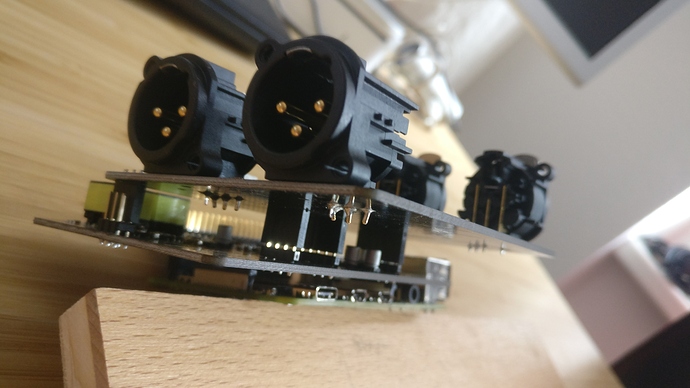 I think you’d be better off taking the connectors off the board and just taking the hot & cold twisted together to a separate connector.

Let’s deal with that on email.

Hi folks! Took me a long while to start experimenting with this Isolated board, but I’m now getting to it.

I’ve picked up a RPi4, with a 5’ touchscreen LCD (USB+HDMI), and I’m reusing the AllInOne 2.0 that I had on my previous RPi3 Zynthian (connecting it to the 4 encoders, 3 MIDI DINs and now soldered to a 5 prong JST to allow me to get those lovely switches that popped up in the Zynthian world since I last messed around with the box!)

Advised by @flatmax, I set the automute to off in alsamixer, and that gets rid of some really nasty physical clicks after note offs - that makes it sound fantastic (Big thangs, Matt!). I tried the audio in, and while there’s no capture level settings on alsamixer, it works perfectly.

Of the above, my priority is to have my MIDI IN working via DIN - I’ll welcome any pointers to look into!

(Last, but not least - I’ve ordered some food for the ravens, just need time away for the day job for a bit and I’ll feed them accordingly)

Anyone else using this board? Would be nice to see some feedback for it in the forum.

Hi Edgar,
Yes, it’s still an open project for me. Unfortunately I don’t find a lot of time since Corona. I am the only happy internal developer that had to take the job of 5 external ones.
But I can show you, what I got.

Nice to read from you!
You are building a nice wood case. Hope you can finish it soon.

Oh wow, your enclosure looks promising! I’ll show what I’m currently at, but it’ll just serve as a boost to how good yours look

please, don’t give up on it - take your time but see it through 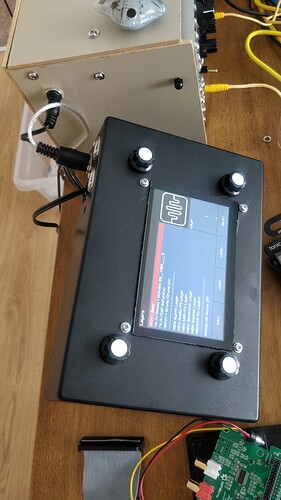 As for its insides. Please consider that this is functionally an open workbench - crammed up into a plastic box so I can easily turn it around and test it 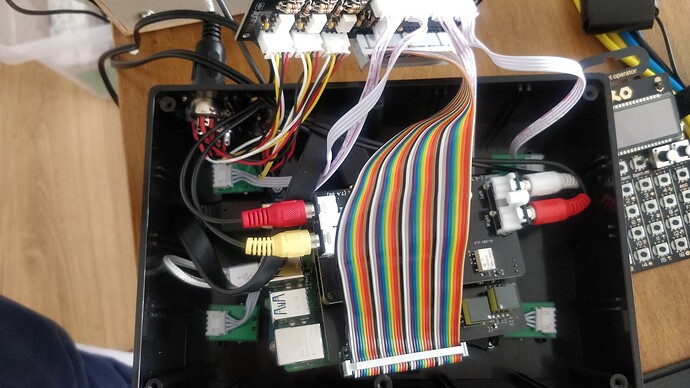 Still about the midi in GPIO pin, I assume the all in one is picking up the midi in/out/trough and sending them via the chip to the fixed RBPi GPIO pins. My question is, would I be able to swap the pins say from through to in, in any configuration file/webconf? I know the Through DIN is working (it passes midi received via USB). Just to understand what’s the problem - soldering, or anything else on my setup.

Of the above, my priority is to have my MIDI IN working via DIN - I’ll welcome any pointers to look into!

There is a well known (withing the zynthian world anyway…) That the LED is an active component in the MIDI circuit and if not included removes a current return path.
Might this is be involved?

There is an infuriating level with all MIDI hardware that you are simply relying on magic to happen, and reversals tend to upset the rig as well, so that is well worth a multimeter check to ensure pins go in the correct direction. It’s easy to see it as a voltage based system, but it’s current based and it’s an important point to realise.

My Audio injectors,( I havent got the big one, althou’ I do believe I kickstarted, but probably didn’t pick up ) tend to not start up when stored as a dfault layer. Since I use this in both my guitar input devices this is a bit of a pain because a restart live would involve about two minutes of audience chattter, and then you have to delete and reaquire the zeros I use ( they are small and you can take wires directly onto the board. As with all zynth hardware it all comes down to how you access the connectors, especially if you wire i/o pin to i/o pin.

I’ve added fans into the pedal board and the temperature is a much more acceptable 45 degrees. This is a Pi4. My other audio injector input device (zynthian-alm.local) is a Pi3 in a Pi3 case so is more likely to be replaced rather than upgraded.

There is a well known (withing the zynthian world anyway…) That the LED is an active component in the MIDI circuit and if not included removes a current return path.
Might this is be involved?

Two things tell me it shouldn’t be the case. One, LEDs are lightning up on activity - even for this MIDI IN that I’m complaining about. Two, the MIDI IN is working if I swap the DAC (same components otherwise).

well worth a multimeter check to ensure pins go in the correct direction.

That’s next on my to-do, but need a bit more time to get to it. I also need to check the audioinjector 40 pin connector is well soldered.

My Audio injectors,( I havent got the big one, althou’ I do believe I kickstarted, but probably didn’t pick up ) tend to not start up when stored as a dfault layer

It’s still early days, but I haven’t found that to be the case!

And considering I’d keep this zynthian close to me, would you say the fans are noisy enough to be a nuisance? I like how quiet it is right now!

it’s just not as high on the priority list as getting MIDI, power and a case I can be proud to look at, sorted. That being said, I did make the first step and soldered the JST in the all in one board - I’m still wondering wether I’ll have the soft buttons or a pedal switchboard (I haven’t tested zynthian’s loopers, that might be a big influence on that decision!)

That’s next on my to-do, but need a bit more time to get to it. I also need to check the audioinjector 40 pin connector is well soldered.

I have heard complaints of this, so give it a look. Not seen it myself unless it’s a very pernicious intermittent!

And considering I’d keep this zynthian close to me, would you say the fans are noisy enough to be a nuisance? I like how quiet it is right now!

Seems to depend on the fans. The pedal board has got 3(?) in it simply cos I could produce a fiendish contraption with cable ties to easily carry the fans near the 7" screen . . . 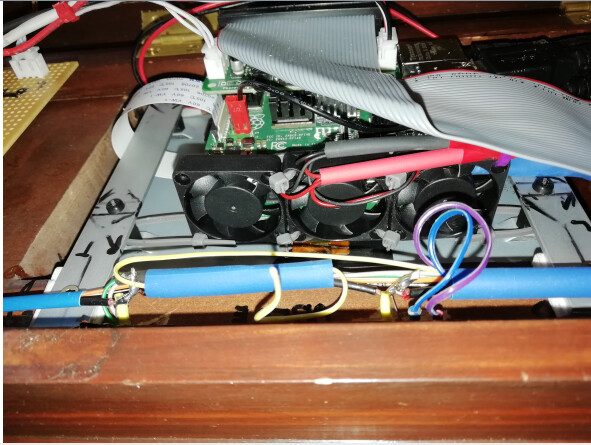 It’s a fairly solid piece of mdf and the fan noise cannot be detected in any environment it was doing any work. It’s not been in a studio yet so that’s where it would be tested properly.

However the 5v fan on a hifiberry 2/pi4/ hifiberry steel case thingy (zynthian-amp4.local) is a noisy beast with particularly irritating and detectable overtones.
The whole world has come on in the world of Raspberry Pi fans and they are now a supported tool in the raspi-config where you can specify on off temps etc if you are willing to add a transistor and a defined GPIpin or better still a PWM 5v fan.
I don’t think this has made it into the zynth yet but it would seem a sensible addition to support house style in this regard.

Adding heat sinks to the chips in the hifberry seems to addressed the problems and it sustains itself ( on all the time) so I haven’t really pursued that too much.