Still and before upgrading I have the issue of hanging notes with ZynAddSubFX.

In the last stable I circumvented this, by sending a all notes off (MIDI CC#123 Value 0), whenenver I release the hold pedal pedal on my Piano (Korg D-1). It wasn’t perfect, but it worked for me.

I know this stuck note problem occurs a few times here as a topic. But nothing in there helped me. I have an idea though. Maybe it has to do with the D-1 constantly sending Active Sensing messages. This is a System Real-Time Message (binary 11111110, hex FE). Because when I use my LaunchpadX on antoher Synth, no issues with that.

In the MIDI log the message CC#123 is there.

I already turned System Messages OFF in the option menu – still persists.

Have you tried the USB spped limiter in the hardware options.?

Ahh forgot to mention, I am an oldschool guy, I still mainly use DIN-MIDI…

As I said I use a seperate ZynAddSubFX on Layer/CH3 with a LaunchpadX, connected via USB.

I use a sperate power supply for the LaunchpadX, cause it drinks a lot of current, with all the blinken lights. Power supply for Zynthian is rated at 3AMPS, never had an issue with xruns.

OK. It did sort some note triggering problems I had a while a go.

Hi @copes! I can confirm that the all notes off command (and all sounds off) are not working in 2210 staging. Will you please raise issues for this and the stuck notes (that I haven’t seen but could try with my WX-11 which also sends active sense)?

Concering the hanging notes. It seems to be the old problem. I plugged the MIDI-Keyboard directly into the Zynthian (via DIN MIDI). So it only gets notes on/off and active sensing (damn you Korg, why?). NO hanging notes.

I route it through the Clavia G2X, which adds MIDI-Clock into the mix. > YES hanging notes.

I will confirm again and then issue this one too.

Cool! The more info you can provide the better. It makes it much easier to diagnose and fix if we can reliably reproduce. I hope to have a fix for the CC123 issue soon…

I route it through the Clavia G2X, which adds MIDI-Clock into the mix. > YES hanging notes.

You may want to check that it isn’t the Clavia G2X that is causing the problem. Do you get hanging notes if you feed that to another sound module other than Zynthian? You could use webconf midi log to see what is coming into the Zynthian and what is going to ZynAddSubFX.

In the staging version, all CC is managed by the MIDI learning mechanism, so input CC doesn’t reach directly the engines, and non-learned CC is simply ignored. We should add some extra code to be sure CC123 and other special CC reach its destiny.

I just pushed a fix to testing branch.

Top of the moring to you!

Yes I have checked that – and how dare you Sir, questioning the most perfect synthesizer ever made by mankind?

Although honestly, I think when they were still Clavia, they had little Elves with fairydust producing their Synths. Then the Dwarfes came in ramblin something about “…not sustainable… got a make a business plan…” – and before you know, the boring Nord Stage and Electro pestered stages erverywhere. They even changed the name to Nord, because “Clavia”? My god that sounds so … elvish, that won’t work for a working horse.

…aahhh well, got a bit sidetracked there, where were we? A yes… it has to do only with MIDI-Clock. If you add that…it’s hanging notes.

I attended the Nord Modular user group meetings in the Hague and we got to hear a lot of interesting insight into both the original & the G2 which they sneak previewed. It wasn’t a big seller and was primarily lead as an R&D project, which was leveraged into the devices like the stage which was where the money lay.
It has one or two oversights, overall The MIDI communication of the original was interesting but had problems with bandwidth and the G2’s use of USB was much better but made running the GUI a considerably more complicated option for modern machines. Efforts like Nomad were partially successful but It suffered much from that as a device going forward. They rejected making it a USB audio device which would hav been rather fine and althou’ there was much talk about a mechanism that would allow recompilation of patches without the audio mute and reset it never came to anything. The MIDI implementation had certain ‘features’ which were never really addressed, especially the original which had a MIDI out socket that really did very little outside of a keyboard source. The G2 was considerably better in this regard but it required considerable use of morph groups and other tricks to get it to do what it promised.
Both magnificent devices at the time but needed to be kept up with developments to remain current… 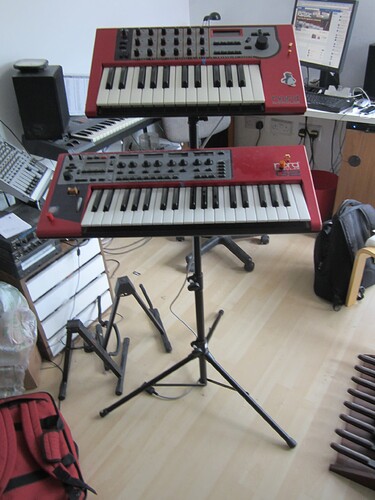 Very sadly Rob Hordijk died recently. He was a fantastic individual and wrote what is probably one of the finst guides to synthesis you will find…
https://electro-music.com/nm_classic/015_workshops/Clavia/NordModularWorkshops&Threads/WerkMap/WorkShops/Hordijk2001/BasicsWorkshop.htm

OMG-- that is very sad indeed…

Countless hours I examined his patches…