My Zynthian 4.4 was delivered this afternoon and it’s up and running with my RPi4x8! The assembly instructions were great.

I play wind controllers, and I have some questions.

Hi @gonzoB , midi filter rules may be the right way to go:
https://wiki.zynthian.org/index.php/MIDI_Filter_Rule_Language

all your question are solvable by zynthian.

For 2 question and midi filter rules is possible use this comand
MAP CH#1 CC#2 => CH#1 CC#11
Must be make in webconfig of zynthian - Configuration Users Guide - ZynthianWiki
It influence all synth layers.

OK, I’ve got the idea of the transposition and CC mapping. So if I configure a soundfont preset with all the tweaking I need in the way of transpositions, effects, etc, to save that for later performance use I would use a “snapshot”?? Is that right?

Hi @gonzoB
Yes, it is.
Imagin that you prepared 4 layers with soundfonts of Sopran, Alt, Tenor and Bariton Sax with correct position of notes, CC comands, audio FX, etc. After you can save snapshot of this as new. When you start zynthian next, you can load this snapshot in future and all is set.

By webconfig is posible rename this snapshot like “Sax qvartet” and also save to PC … and from PC is also possible load saved snapshots.

However, when I load a snapshot the top line of the control screen shows the soundfont/preset that is the base for my snapshot, not the name of my snapshot. This is an issue if you have more than one snapshot of the same preset. For instance I have a C flute and an Eb flute snapshot - they both say the same thing on the top of the control screen, so I can’t check if I’ve loaded the correct snapshot. Am I missing something?

Do you mean the title of the preset like this? 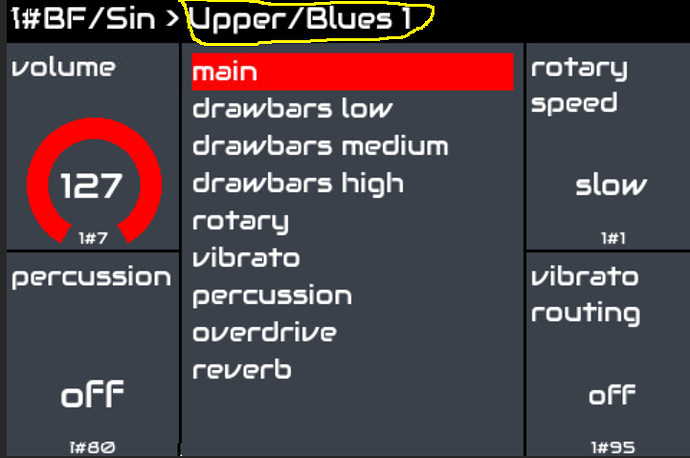 We don’t currently have a method of changing preset titles but are planning to add more control over the saving, naming and recall of presets. That probably won’t arrive for a few months though.

Yes, @riban that’s what I meant. @ToFF I have been renaming the snapshots via PC, and that works fine. It’s just that you have no indication what you’ve loaded.

Please put it on the list when you’re re-vamping it.

Currently you do this from the zynthian’s UI too.

and from PC is also possible load saved snapshots.

AFAIK, this is not possible yet

I was hoping to be able to program my 4 favourite snapshots into S1-S4, so that I can change quickly. It seems I can’t do anything that specific - the closest I can get is to display the “load snapshot” screen. Is there a workaround?

Thanks Jerryn, but I have all that data already. I didn’t explain myself well. I want to know if there is a way of programming the S1-S4 buttons to load a specific snapshot.

You can do it with subsnapshots and then mapping the midi program change number to the button.

@gonzoB I don’t think that is currently possible. There is no CUIA for recalling a specific snapshot. You could submit a feature request for this.

@Baggypants I don’t think that will provide the required functionality. I have been trying to get something like that working today but failed. You can configured a SubSnapshots for an engine and map a program change to a button which will recall this snapshot for this engine but I have not been able to recall snapshots for multiple engines from a single button press. I have tried various mappings and plugins but not found a way to do this, maybe due to some internal filtering.

I have also found some issues that have slowed me investigations down:

So if @gonzoB just wants to restore a single engine’s state from S1-S4 then they can use ZSS but if they want to restore several engine’s states then I have not figured out a way to do that.

Isn’t that how it works in Stage mode though?

Yep! It is kinda designed for stage mode so you can recall the state for the currently selected engine. It also works fro mult-timbral mode, recalling state for the engine on the relevant channel. If the user just wants to recall one engine’s state then it works well but if they want to recall the state of many engines simultaneously then it lacks functionality.

ok, gotcha. For complex layered sounds. I’ve only ever done “DX7 EPiano2 and strings” which doesn’t require as much customization