Make a modulation control, worn like a ring, $20 in parts

I unfortunately don’t have any Bluetooth MIDI devices, or a computer, phone or MIDI device that handles Bluetooth 5, I will probably have to make a BT to USB receiver as well, that does leave possibilities of a lower latency proprietary communication scheme. (like some of these Ring controls use)


The 2018 Neova MIDI Ring Controller by Enhancia, seems to have vanished from the market.
.

Here’s the little processor board, and a 150mAH Lithium Battery I got in a TinyDuino clearance. The board has a build-in battery charger and a pair of pads on the back to connect a battery. 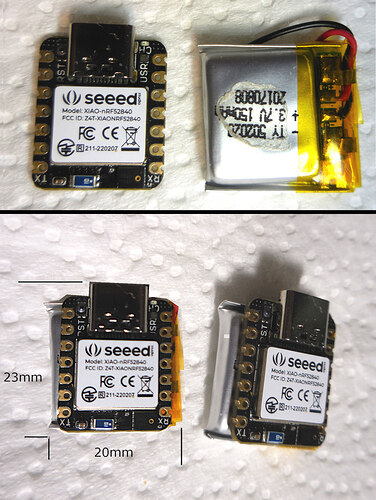 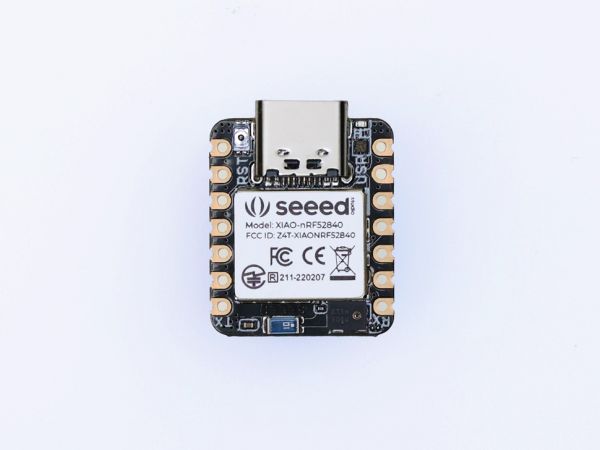 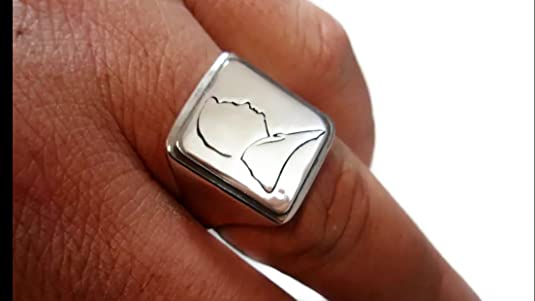 The M4 processor with floating point is fast enough to do some TinyML speech recognition, perhaps if eee ooo aaa can be recognized, like…
The Vochlea Dubler II (with 13 demo audios) demonstrates what a desktop processor can do for voice to MIDI control.
A review https://www.youtube.com/watch?v=4yFzRINYy5c

These 2 examples work with the Arduino Nano 33 BLE Sense, theior first nRF52840 based board.

This similar sized board is sold with another possibility, a 0.41" OLED display. 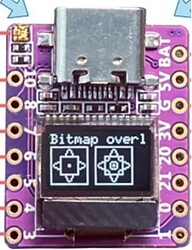 Update: A Look Into Packaging Options:

Having no 3D printer like facilities, I looked for existing finger mounted device that could be modified. (I did mention that the XIAO board has a built in battery charger (connection pads on the bottom) that would work with the batteries in the pictures. The Nordic Bluetooth chip is good at going low power, I may not bother with a power switch, just having it sleep when inactive. 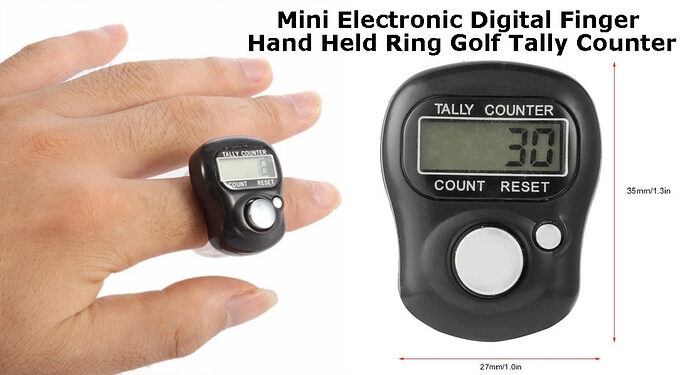 I gutted the components, cut off the internal support posts, and the strap clip fingers, routing some walls to make yet more space (have not cut out the USB-C connector slot). 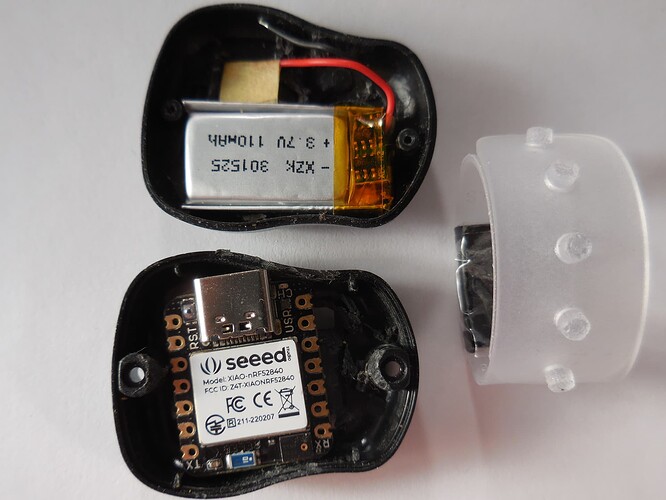 Parts in Counter Case1920×1440 138 KB
The XIAO and Battery fit in the case halves. The somewhat undersized 110 mAh battery is 25x15x3mm that’s the thinnest I could find, it’s smaller than the computer in order to have a chance to not cover the internal antenna (one guide suggested having at least 8mm space from metal parts and antenna.

Having some clearance for the Bluetooth Antenna is essential, it also would be good to have the LED and Reset Button accessible through openings, likewise for the built in Microphone, so some sort of vocalizations can be generate MIDI control signals. 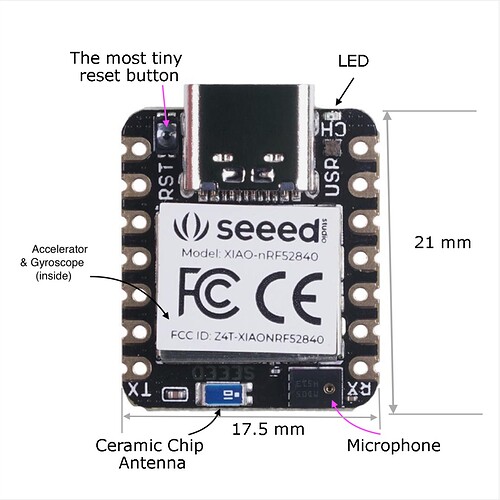 I found an available plastic project box, with good dimensions (it fits a Pi Pico RP2040 board), I cut the length down to about 25mm. 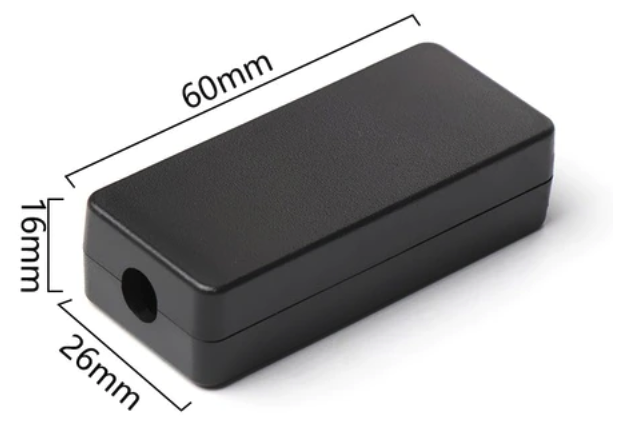 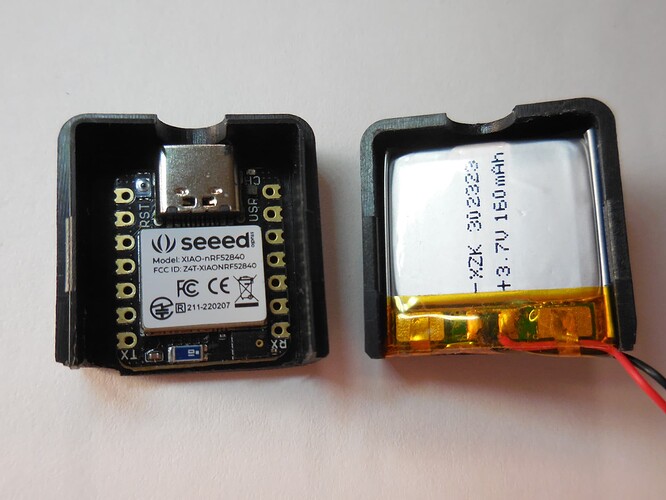 Parts in open box1920×1440 140 KB
Not sure what battery size will fit the needs, shown is a 23x23x3mm 160 mAh example, this box has the height to accommodate a thicker one with about twice the current capacity.

There is a standard 18mm “Snap-on” jewelry button, that resembles a team jacket snap button. 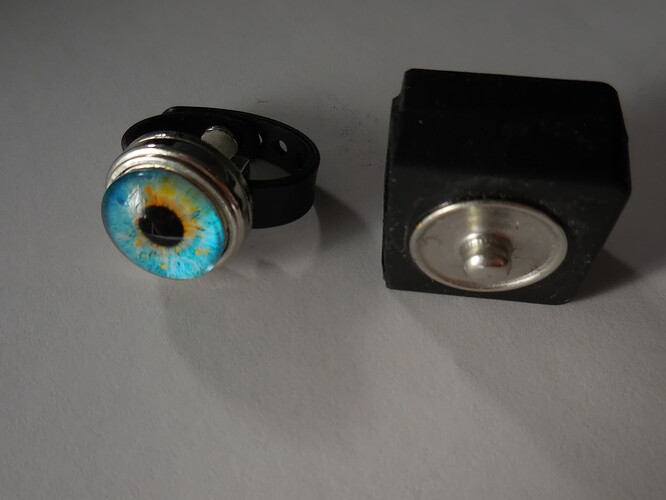 After 2 attempts I finally got some Lipo Polymer batteries, like typically built into rechargeable gdgets…

Here’s an example ring with a Halloween suitable decoration and a similar snap attached to the custom box. 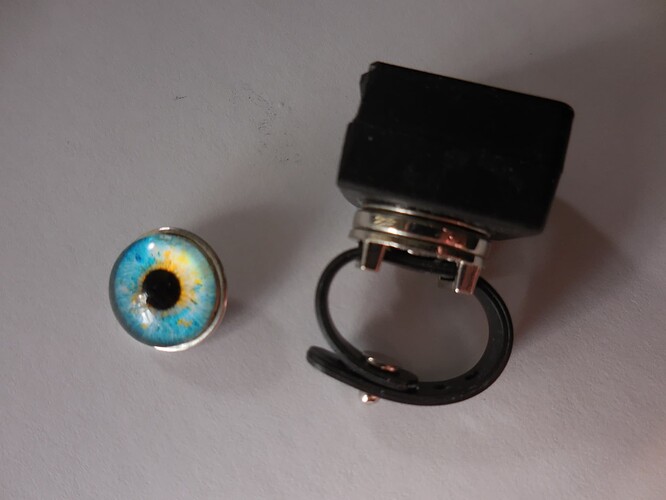 Ring Snapped on Box1920×1440 76.8 KB
Here’s the adjustable strap ring attached to the box. Not as cool as the $200 commercial gesture controls using custom surface mount electronics, but good enough for tests.

All part pictured were from Aliexpress, though I got a better deal getting the XIAO from Digikey.

I still have no Bluetooth MIDI gadgets to test with…

I wish there was not a conflict with the Zynthian DIN serial connection and the Raspberry Pi built-in Bluetooth.

The clever PIO logic in a RP2040 (Pi Pico) could probably enable it to handle the classic MIDI connections and perhaps the rotary encoder interface, freeing up the big Raspberry from some timing critical tasks while enabling Bluetooth. (The M5 Stack 8 encoder I2C module recently posted, demonstrates the sort of encoder interface an RP2040 could provide.

conflict with the Zynthian DIN serial connection and the Raspberry Pi built-in Bluetooth.

This is not the case with Raspberry Pi 4. BLE works fine. Checkout this discussion on getting it working in Zynthian (manual configuration).

Last week I ordered two Seeed-XIAO-BLE-Sense for some playing. I want to test the ability to transfer position with the posibilities construct wind controller aka trombone - like something midi-bone by @gonzoB . So I’m curious about your results @MaxMaxis.

From the products available in the market, I use Akai EWI USB wind controler with WIDI Uhost and USB battery bank and for addition next signals Genki Wave ring on right hand. Midi signals are receive by WIDI Bud Pro on side of Zynthian (or other synth, computer…). This solution of mine is of course significantly more expensive… Rather, I have problems with how to sensibly use signals about moving and transfer them into sounds. Probably the most satisfactory solution is provided by the Anyma Phi synthetiser for me.

Linear motion tracking with an IMU is tough for more than very short term, errors add up quickly.

Accelerators can measure tilting more reliably having gravity as an angle reference. With an added magnetometer one can track compass heading.

A “time of flight” distance sensor can be accurate if you can set up s reflective target.