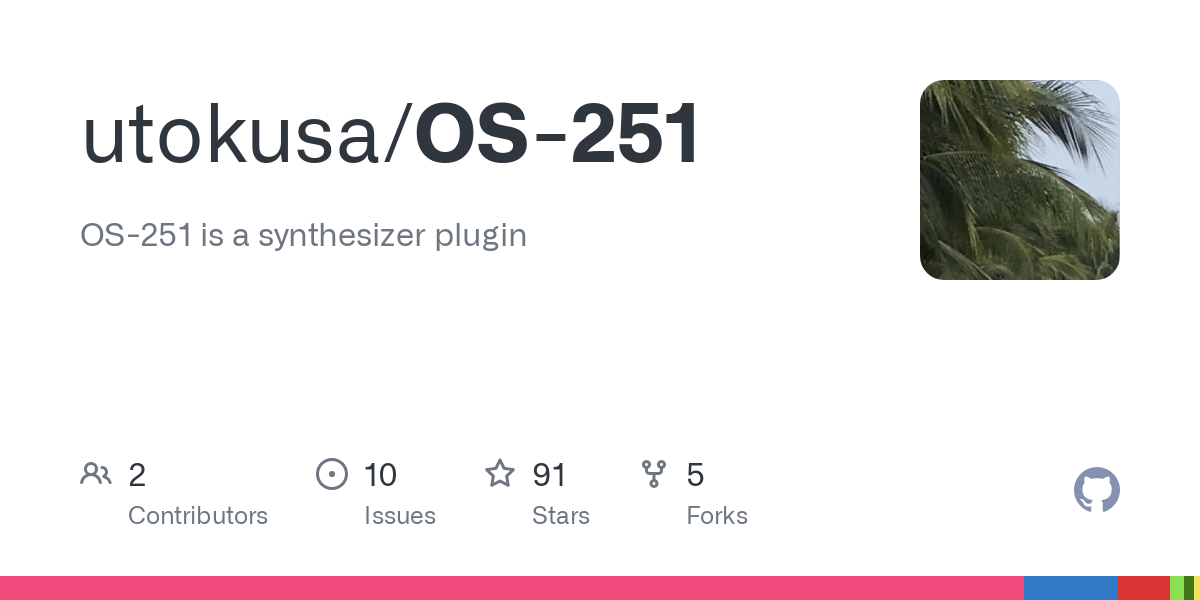 OS-251 is a synthesizer plugin. Contribute to utokusa/OS-251 development by creating an account on GitHub.

I managed to get it to build and wrote down what I did:

**Is your feature request related to a problem? Please describe.** https://gith…ub.com/utokusa/OS-251 **Additional context** I've built it on my pi but it won't build in 1G ram unless you have swap enabled (I installed and used zram). The workflow _should_ be pretty much as follows but this is build retrospectivly from my history. ```bash apt update apt install npm cmake gcc-c++ cd ~ git clone --recursive https://github.com/utokusa/OS-251 cd OS-251/src/jsui/ npm ci npm run build cd ../../ mkdir build cd build cmake .. make cp -r src/Os251_artefacts/LV2/OS-251.lv2 /zynthian/zynthian-plugins/lv2/ ```

The oscillator has alias noise (specific to digital signal processing) famous on classic samplers like E-mu SP-12 which adds lo-fi feeling to the sound.

I heard a glitch in one of your samples. How resource hungry is it?

We want to remove plugins that provide little or no benefit, e.g. those that don’t work and be more circumspect in our choice of new ones. I think twists like this should accompanied with justification for their inclusion. We shouldn’t add stuff just because it exists.

My initial appraisal of this is that it sounds okay but not brilliant and may not provide benefit over existing analogue synth simulation.

Feel free to add justification for adding it either here or in the GitHub ticket (or both).

We might end up with_official_ Zynthian plugins and community or other available ones which would allow users to add any they want but identify those that have some level of support.

If ever I want to annoy a lead guitarist I’ll say ‘I think your coming through a bit hot, there’s quite a bit of distortion, you probably want to back that gain off a little’

‘LowFi analogue’ is very in vogue at the moment. Even if it comes across as oxymoronic nonsense.

It’s not too problematic with resources if you turn the number of voices dial down a bit.

There’s already a curated list of lv2 synths in that they’re not all enabled in the web ui on the image, I imagine this will be like that.

I recently reported some issues in GitHub about LV2 plugins that didn’t work or were very bad and agreed with @jofemodo that such plugins should be removed as they just clog up the system giving users a bad experience. We also have issues reported against plugins which are not very good and we spend time trying to resolve issues that we shouldn’t bother with. I see us having a set of showcase plugins that are enabled by default that show the best of class plus more plugins that we have deemed beneficial to have in the system that we will support. I also see everything else being available via a community supported channel, i.e. users may enable the unsupported plugins but caveat emptor / there be dragons.

The support effort is scarce and a common user experience is to be confronted with a massive list of plugins and to be disheartened when having tried many they find a load that are suboptimal or not working.

I want to see any new plugin suggestions accompanied by justification. It should include evidence of what makes this plugin different from others, what makes it good / interesting, proof that it works and what system impact / resource usage it has, etc. We have been guilty of seeing something shiny, posting it here then just adding it without any consideration of why we are adding it. Let’s make Zynthian the best it can be which includes the paradigm, “less is more”.

I keep trying to fix my amp when I hear LowFi production playing through it.

I just tested the synth, I love it.
It would be interesting to have it in Zynthian.

For the resources, I have not tested, but indeed if it is too hungry it is a problem.

One of the issues is we can’t install it with a build script like some of the other synths, I put in a package request to KXStudio repo and falkTX. He noped out of there at speed. He’s got huge experience working with plugins so I respect his comments.

falkTX is also known to react quickly without as much consideration that others may take so we should validate his concerns and report upstream if possible. The packaging we would require for Zynthian may be minimal because we have a fixed platform - the packaging of plugins I have done has been quite minimal. I am yet to get this to compile. (I am away from home and only have a RPi3 with 1GB RAM and the build fails.) There seems to be an appetite for this within this community so maybe we take a look at the source code to see what falkTX’s concerns are (he doesn’t expand on his high-level comments) and consider whether it gives sufficient benefit without significant support burden.

I compiled this and tested and feel it is not yet good enough to warrant inclusion as a supported engine but it could be with some modifications which I have reported upstream. These include:

We could resolve some of these ourselves but a better solution is to feed the issues and solutions upstream. We can package it ourselves because we only target Zynthian so can get by with very simple deb package.

I’ve uploaded a binary version to zynthian repo, and also converted the factory presets, so you can simply update your zynthian (testing or staging branches) and click on “search plugins and presets” button from webconf.

@Tabula, i also think this synth has “something special”. I love the sound and simplicity.

We should refact the LV2’s TTL files for grouping parameters and adding scale points, etc. And yes, this is a very good task for volunteers wanting to contribute

Be aware that the issues I reported last year upstream and in this forum (see above) persist - be careful out there!

I have done this bit.

And i added the grouping, so it’s fully integrated now!