Hi,
I just see that Moddart team release Pianoteq 7 : https://www.modartt.com/pianoteq#overview , the cost to upgrade is 29€

It does not install on Zynthian, I will take a look later.
The structure in the 7z file is not the same. 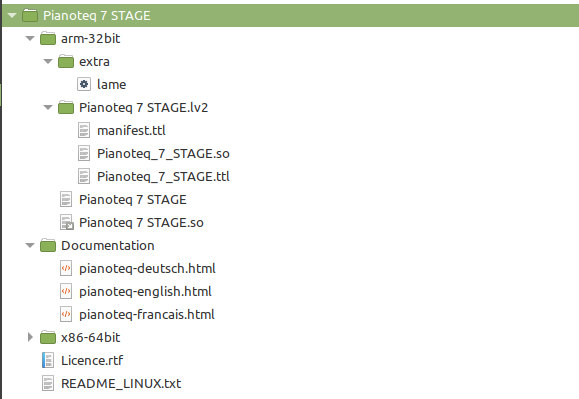 Interesting! I am planning to buy this for Christmas so a new version may be good but… the modelling enhancement may increase resource requirements so it will be good to get the demo working so we can assess our on Pi 4. Note that some new features are only available with Standard and Pro, the more expensive versions.

I saw this news too. Usually it’s great if software gets updated. For Zynthian, there are a lot of unknowns, so I am sticking with Pianoteq 6 for now.

in the install recipe, the /arm needs to be replaced by /arm-32bit

Then it installs and existing snapshots work.
BUT

@jofemodo
The Pianoteq 7 Layer shows, when I Remove All Layers.
But as soon as I select it and go back, the Pianoteq option is gone.
When I select a FluidSynth or any other, Pianoteq is still there.
The Log doesn’t show anything suspicious.
Where should I insert more log messages?

I committed something, so that you can play with version 7.
But the described error exists…But it existed when I used the latest 6 as well.
So could somebody please confirm, that the Pianoteq engine disappears from the Layers list, once you created a Layer…and removed it.
@jofemodo, I think it has something to do with removing it from list, once the first one is created, so that only one PT layer exists.
But you need to free it up when the layer is removed. (and not only with RemoveAll)

Thanks for the fix to the install script. I also think we should change the directory name. I will do ASAP.

@jofemodo, I think it has something to do with removing it from list, once the first one is created, so that only one PT layer exists.
But you need to free it up when the layer is removed. (and not only with RemoveAll)

I can’t reproduce the problem with Pianoteq6. I’ve not tested with PT7 yet …
Please, could you describe the exact steps for getting the issue?

When you select the MIDI Channel, the layer is created and when removing it, everything is ok.

OK! I understand …
Please, could you create an issue with this? I will solve it ASAP …

empty layers click on PT In MIDI channel view, go BACK to LAYERS Click New Layers, PT is gone When you select a MIDI Channel,...

Will Pianoteq update automatically when you have fixed the hiccups?

You have to upload the binary yourself.
It doesn’t download the latest version from the modartt site.
The hiccup doesn’t seem to be that relevant.
It only appears when you press the Back button in the Midi channel selection view.

there is an entry in the FAQ on https://www.modartt.com/faq?category=pianoteq_troubleshooting:

I cannot activate Pianoteq 7 on Raspberry Pi.
- Make sure you have installed update 7.0.2 or later.

I read a user comment that code changes appear to improve resource efficiency:

Additionally, physical model improvements appear to come with greater efficiency on an engine resource, since I can now lower its Audio buffer size without it incurring normally crackles and spikes.

This is not from Mordatt and not arm specific but might be a good sign for us. I will run benchmark comparison when we have 7 working.

I make the modification directly on the web editor on github, normally same as my local zynthian

@jofemodo, could you confirm the pull request? I can’t

Is there a plan to update to PT7 or allow user to do so (with instructions)?

Bad new on the resource front - Pianoteq 7 is more hungry than Pianoteq 6. I did not run the benchmarking I have done before but I did a simple manual test:

PT6 can play 48 notes simultaneously without xruns. PT7 starts to xrun around 32 notes.

Obviously this is pusing the configuration for Raspberry Pi - Zynthian configures Pianoteq to use half samplerate internally (e.g. 22050) and JACK is usually configured with larger buffers but I wanted to see how the two compare.

I also found using the UI via X-forwarding very slow to the point of unusable and had to resort to HDMI output to test.

This is a shame and a bit of a worry that Raspberry Pi may struggle to match the release cadence of Pianoteq, i.e. PT uses more resources faster than Raspberry Pi increases physical resources.

When I find time I will run the JACK based benchmark to see how PT 7 fares. It will probably be fine for most uses but be warned that PT 6 may provide a more stable experience.

[Edit] I played some more with PT6 without Zynthian or Jack but with 64 frames per period at 48000 samples power second (1.3ms latency) and it was quite good. Too much sustain pedal or effects will push it over the edge but for most playing it is fine