A few questions regarding SFZ format, i.e. LinuxSampler and its support on Zynthian.

If you already have an rpi4B I’d recommend putting zynthianos on an sd card and trying it with just normal rpi headphone out to begin with.

Yes you can stick the sfz file on a usb and use cli tools to copy it to the appropriate place. There is a terminal built into the web configuration page, you don’t even need to ssh.

ready to copy the files from the usb stick… but how do I get the path to the usb stick under linux CLI? should I mount the device first or something? sorry, my linux knowledge is quite limited…

USB flash is automounted at /media/usbX where ‘X’ is replaced by the partition number, e.g. /media/usb0.

I expected to see a method of uploading SFZ but as you say this is missing. I suggest adding an issue to the tracking system.

You can upload sfz files from your computer using ssh and scp. Here is my past post:

Fluidsynth (not just in Zynthian) does not respond to filter cutoff or resonance. That is why I don’t use it.

Put the .sfz in the same folder as the sample files. You might have to edit the sample path in the .sfz file.

BTW, The Zynthian build of Linuxsampler natively receives controllers. You do not have to “Learn” ccs if they are hard coded in a sfz file.

If you want to assign bend up to one step, bend down ` to octave, cc1 to pitch LFO, cc2 to Filter LFO, and cc4 to filter cutoff, add these lines to the sfz file at the group or global level:

You might have to delete a few lines if pitch or filter are coded at the region level.

Works for me. This should give you a general idea. I know, send a demo …

It is better not to use the RPi SD card for samples… it can’t timely loading samples while Linuxsampler is running, so large instruments will cause stuttering and sound interruptions.
A good way to get rid of artifacts in the work of Linuxsampler is to use a fast USB 3.x flash drive…

the structure of catalogues on a usb flash drive, formatted in fat32… 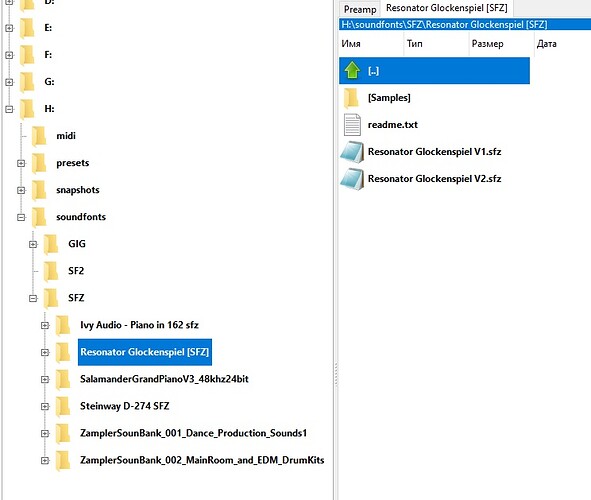 To download new samples to a USB flash drive, simply connect it to your computer…

The “sfizz” plugin is fine)) it works perfectly in MS Windows and Linux… I use it in new projects. When will it finally appear in Zynthian?

I’ve had a go. sfizz requires the gui to load samples. You need to use it in conjunction with the novnc.

Hi there,
Some info essentially relating to SFZ on Zynthian that I eventually figured out and that I’m sharing here: my main Zynthian purpose was to use a big SFZ (namely Ivy Audio’s piano), knowing it’s using flac files.
I was wondering if it worked in the first place and if so, if flac decompression would affect polyphony.

So I transferred the instrument and samples to Zynthian and tried it. Result: the instrument did play, but I had a click on every note on/off and the notes also stopped abruptly though there was a smooth envelope release in the instrument.

In order to see if using flac was the cause of these issues, I converted all samples to wav (and even normalized them + converted them to 16 bit + trimmed the lowest level portions, all in order to keep the instrument size approximately the same as with flac), then created a SFZ using these wav files instead

So, using flac files seems fine. As for the other two issues, I finally solved them:

if you simply change this to:

So things are starting to work quite nicely, now…

In case this is of any use for someone else…

You should send feedback to LinuxSampler developers or open an issue on the their tracking system. This problem doesn’t looks like something difficult to solve. Anyway, if they don’t want to solve it or they are too slow, we could write a script for “sanitizing” the SFZ code and make it work on zynthian.

How are you measuring load? RPi 4 has 4 cores so some measurements will show 25% when one core is at full load.

I had a similar muting issue with Hifiberry. It is annoying and we should look to disable it by default.

The original SFZ format definition (The SFZ Format) states that opcodes must be separated by at least one space / tab / carriage return. Here the opcodes are separated by a space but the first opcode sticks to the header without anything in between

…so it’s likely this SFZ file doesn’t comply with the SFZ format spec, which may be why LinuxSampler doesn’t read it properly. One could simply try to add a space after instead of a new line and see if it works as well:

The instrument is easy to fix as it’s the only statement in the instrument (and only opcode not separated from a header), so this situation only happens once.

The samples are nice (Steinway B, 88 notes, 5 velocity layers and 2 round robin) but this SFZ isn’t very good anyway: no filter cutoff control by velocity for instance, so velocity layer transitions aren’t smooth, with a noticeable brightness change when switching layer for instance. I’m working on improving it a little…

I used the small VU meter in the Zynthian interface, which can be assigned to either audio out level or RPi load from the web interface. So it’s a very rough measurement, but it seemed about 25% total and couldn’t exceed this even when playing more notes simultaneouxly. So it may indeed mean that LinuxSampler runs within a single core, which can get fully busy.

One trying test case may be the free SalamanderGrandPiano Here and Here.
Comes in .wav and FLAC SFZs as well as single file SF2 using .wav samples.
(The second source has a OggVorbis SFZ totaling 82Mb)
The loFi .wav 44.1kHz 16bit version has 641 samples totaling 1.2 gig.
Might be a good case for a 4-8 gig Pi 4 and fast USB3 drive to store sample files.
It has 16 different velocity samples for each key along with 88 mechanical key release sounds.

And one more FYI, the Soundfonts 4U page has a variety of pianos and qualities, all SF2 some recently updated.
(The 47Mb Chateau Grand-SF-Lite-v1.0 is sufficient for my tin ear and lousy speakers)