In this new economy, where socially distanced outdoor performances are seem like a good idea. Expanding the capabilities of homeless looking, but talented musicians could involve some Zynthian/Mod variation.

I have seen an accordion street musician in my neighborhood, there are MIDI accordions available (Roland) that can make full use of Zynthian capabilities, (I understand they are much lighter than the real deal) somehow rock posing with a keytar looks odd without a backup band.

I had just made a rambling post on the form that headless Zynthians could take, including a minimal low cost version, perhaps more affordable to these street performers… 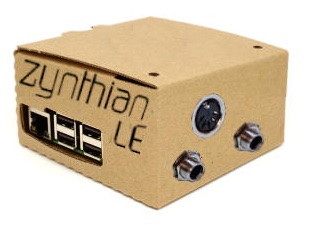 I have been away for some time and need to study the remote access capabilities documented in the WIKI, and follow the discussion of VLC. (Though I suspect something more clever than shipping out screen grabs will be needed)

I’m not sure how to get even a stripped down zynthian into the hand of a homeless looking person with an old guitar and a practice amp, perhaps some arts grant program… I will at least try out a min prototype system with some locals.
(I’ve heard that the Covid economy has caused an increase in food shoplifting. Oddly, the local Microcenter store reportedly lost some $3000 in Raspberry Pi’s to a shoplifting mob who overpowered the staff, one has to wonder where they will end up) 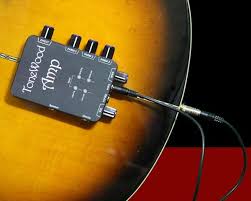 One clever piece of equipment that’s been around for 5 years, the ToneWoodAmp, attaches to the body of an acoustic guitar with magnets, with the help of an added pickup it uses the body as a speaker. There are endless sample videos of pros on youtube trying one for the fist time, people who compose on their couch with a guitar find it inspiring.
Flamenco autowah

They have built on the pickup and amplifier base, by sending a line level to iPhone apps, MIDI Guitar, in conjunction with Sampletank can generate Polyfonic MIDI accompaniment. (real time chord extract with a phone app is quite an achievement), without the traditional 6 channel pickup associated with a MIDI guitar . MIDI Guitar is available for Windows, MacOS & iOS (But not Linux!!)

For those who want to tinker with pitch detection:
Here’s a list of Transcription plugins (for Vamp, an audio processing plugin system, that doesn’t do real time MIDI output (Yet) perhaps some coder can will be inspired to make a real time optimized version of such code.) Here’s a 2018 paper: A polyphonic pitch tracking embedded system for rapid instrument augmentation, that concludes: The system runs in low-cost embedded devices with ac-ceptable latency. An extensive test with electric guitars have shown that the system is able to detect melodic notes and polyphonic chords even during very fast performances.
A strong looking source of music experimenting code is The MusicBricks Toolkit, (#MTFToolkit ) there are some odd projects like color triggered notes, there is real time pitch detection and pitch shifting code, after signing up to download the pitch detector code you get compiled binaries for Android, iOS, OSX, Win 32/64 and a header file & example code. Missing Arm processor binary.

Loopers are a popular way for solo acts to enrich their performances. This Violin player makes good use of a pedal.
Here’s a short Zynthian thread on possible future MIDI and analog? loopers. The always ram challenged Zynthian’s may be limited in multi layer audio loops. Raw 16 bit stereo appears to eat some 172K/second (10.3 Mb/minute) that’s not too bad… (I ran across freewheeling, a 12 year old Looper with Linux C src code ( compiled Mac demo didn’t work for me)

The biggest issue is power supply…
I’ve tried keeping pi’s alive on USB battery packs and they can be at best marginal once you add a screen & an audio card and a USB connected and powered keyboard.
If anyone has a better experience of this then please relate as it as point out a tremendously laudable idea in many ways.

A Pi Zero would probably be a better target point. I did try and zynth one a fair while ago but dont’ remeber too much success, but things change.

As far as an external zynth goes I would skip the audio out level completely and put a hifi berry amp on the back of it and run the whole rig off twelve or more volts (small car battery? or similar … PV powered current store…? The last would seem to make sense for public use. (Charge all day, play all night . . . ).

Where this does present a problem is audio in ( mics,guitars,violins,church bells,strange gloopy noises in tunnels…) both for your self and others who turn up bearing a 1/4" jack of some sort. But having seen the Pi4 cope with a Behringer 1820 I can’t see why we can’t think about multiple low latency (audio cards) ins and outs in a zynth…

I can squeeze my audio rig ( , powered by a 12 Volt telescope power pack) with JBL control Ones into a rucksack and have cycled it ten miles without discomfort so the zynth certainly does this job very well…

I’ve made some holes in the case so you don’t need to open it up to connect and disconnect the speaker leads. [image] You can see why it would be nice if HiFiBerry silk screened the hole locations onto the box . . . Might not be a good idea for a steel case of some sort because of the risk of shorting the speakers to ground, if raspberry pi steel cases are earthed … ? Actually how is the zynthian case earthed…? And are we absolutely sure Left is left & Right is right …?

Better late than never isn’t it ? That is my short audio demo. @wyleu - sorry it took so much time, but now my conscience is clear

This is one of layered presets and I have got a lot of nice combinations since my zynth was finished, a few hundred I guess… It was used in our active live performances across India (battery powered, we played on the streets a lot) and it proved to be a very reliable friend in unpredictable and sometimes stressful environment. Now I have completel…

I’ve been interested in using the Pi Zero for single purpose applications, like embedding a basic engine in a keyboard controller. But the variable computing requirements for Mod pedalboards may choke a zero.

I saw the whlen 2018 post on the Zero and this 2020 post and I had been waiting for an image build that would run on a Zero without a lot of tinkering. (The Zero size Audio injector with ADC/DAC is selling on Amazon for $16.90)

A Pi Zero will struggle to run Zynthian. In fact I think it would be too much of a challenge to get it working. The Zero has the same chipset as the Raspberry Pi 1 (A/B) and Zynthian is only supported for the Raspberry Pi 3 and above.

You could get a single engine synth running on it, e.g. fluidsynth in headless mode. I had planned to do so for a broken digital piano I have but it proved challenging to obtain a Zero (limited supply / costly delivery). I did write some code to run fluidsynth on a Pi with small, simple display - I should try that with a Zero.

The concept of getting low cost devices into the hands of the many is good. Having an extensible platform allowing different interfacing, e.g. instruments is also good. Maintaining such an effort could prove challenging. How would one interact with such musicians?

How would one interact with such musicians?

Can’t see why it wouldn’t work with musicians . . .

I was just trying to run the zynth gui on a zero for remote use but I didn’t get too far with it. . .

It’s surprising a UK guy would have trouble obtaining Raspberry Pis (perhaps 12 year olds get top priority) The Microcenter Store chain in the US has them on hand, if one is lucky enough to live close to a store. I don’t know if they would do international shipping. (They had one per customer Zero Ws for $5 for quite a while)
By the way, looking for a less resource hungry system version, I ran into Tiny Core Linux, which also runs completely from ram, eliminating SD card cache file corruption hazards on power fails. I imagine it’s impractical for a project with so many dependencies like the Zynthian, but useful for simpler Pi Zero embedded applications.

All my troubles with portable power have finished with proper power bank. Exactly this model from aliexpress: Essager Power Bank 20000.

It supports power delivery (PD) standard to charge notebooks and other devices, but most importantly it gives the honest 3A with proper cable, so I have’t experienced any power issues or xruns since that. The quality and length of the cable is of great importance here !!! Baseus and Essager cables with PD support works great (as they are probably made for higher current and amperage).It also supports simultaneous charging and working as powerbank.

I would advise something like that for any kind of external performances/gigs or just outdoor fun. Powering external midi keyboard and usb midi controller also makes no problem at all.

Another solution I have used a lot is an external diy batter from four 18650 with dedicated laboratory power supply with complete control of V&A. Imho powerbank is more convenient.

USB cables, particular bargain priced ones, have small gauge wires, and thin connector contacts that are potential voltage drops really pushing it with with a 2.5A power bank, might get a little more life with a more efficient switching buck regulator supplying direct 3.3V to a soldered connection to the Pi, instead of wasting 1.7V of your bank power in the Pi’s analog regulator. (Those power banks are already using a buck converters, dropping 7.2V to 14.4V out of series wired cells to 3.3 would be most efficient, well maybe by 25% overall.

That won’t supply 5v to the USB ports presumably…

I just ran across a reference MOD clone that is a simple headless thing. The Patchbox MODEP.
Default setting starts as a WiFi hotspot running VNC and bluetooth. No sound cards menu, only built in Pi audio and the Pisound card they are selling are defined, luckily I ran across a how to article with the Audio Injector settings spelled out.

One Street Performer Association is The Busking Project, with 8600+ members.

Speaking with a street guitarist, using a battery powered Vox practice amp, I learned he is using a bluetooth speaker. Depending on BT version and whether the stream is compressed, latency can go anywhere from an ideal 34 ms (aptX LL) up to 100-300 ms.

(He was planning to pull the preamp/Bluetooth sender out of his amp, to keep the controls handy in his coat pocket.)

Hi @MaxMaxis, Patchbox OS also includes Orac 2.0, Pianoteq Standard Trial, Super Collider, Pure Data and Audacity. MODEP, Orac and Pure Data are modules the run headless. It also supports the on-board headphone jack,I2S and USB soundcards. The setup guide states USB audio cards do not seem to work well with Pianoteq. A complete list of Patchbox OS features can be found here. I have used it running Orac headless on a Rpi3 with a pHAT DAC I2S soundcard and controlled it with Lemur running on iphone and a midi controller. Orac could be setup to control with midi cc using just a midi keyboard.

I think @riban’s suggestion to use pi zero running fluidsynth might be more practical than using Orac for street performers. Have you heard of the nanoPi synth? Something similar could be done with a cheap thriftstore usb-midi keyboard and a pi zero.

I hope you find a solution to meet the goals of your noble aspiration.

I imagine one could do nearly as well with iPad apps, though harder to play with flamboyant drama.

In a recent video Jordan Rudess, says he played the organ parts in a Deep Purple concert all on an iPad.