Hi,
Im new to Zynthian and just built a 19" Rack version with Pi4
My respect for the hard work and engagement!

I have a midi routing question. I want to use Usb Midi with my Roland RD 2000. I connect Zynth via usb and sent midi channel 1 via external switch.
The sound from Zynth playes, but sends back MIdi to the Roland and trigger internal Midi Ch1.
Behaves like USB Midi thru is set to on by default. How can I disable USb Midi thru?
Thx in advance

Are you sure it’s looping back from Zynthian? i.e. Have you turned local off on the RD2000?

ike USB Midi thru is set to on by default. How can I dis

If the Roland receives on CH#1 and only Ch#1, use at the Zynthian other Channels.

Have we seen any pictures… ?


I rather fine device:-D I wonder if it’s the same bed as my A-88? It certainly looks well equipped with control source and two sound engines …? and yet you’ve come here!!

The midi out on USB seems to work pretty well with most MIDI issues, and as with most of these sorts of issues it boils down to what you are trying to do.

Realistically MIDI works best when looked at as an instrument per channel. The assumption is that NOBODY should be playing more than 16 channels at once, and remember this came from the age of Rick Wakemanesque display!
So presumably you can allocate both the Rolands Engines & the Zynth to specific MIDI channels that the RD2000 is putting out.

Do you use the RD2000 engines and how many engines do you want to run on the zynth? Basically give each one a MIDI channel and stick to it.

The zynth itself has a MIDI channel it like to run for its own benefit, and listen for a higher level chat than goes on down at the base MIDI layer. This is defaulted to Channel 16, anything that involves a zynth starting up is going to happen on this default channel so it’s a good place to be aware of.

This is where the MIDI display in the webconf really comes into play. . . 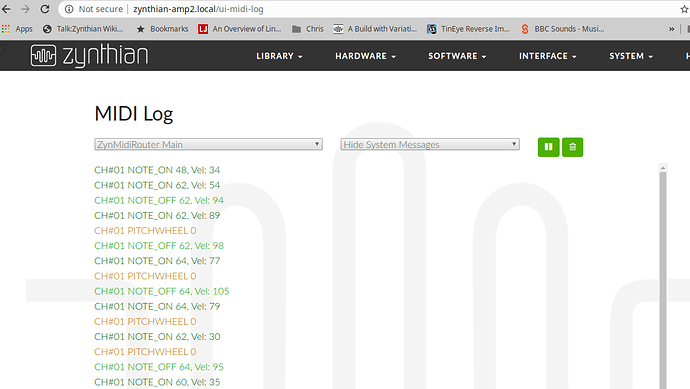 and the home page reveals the MIDI defaults. 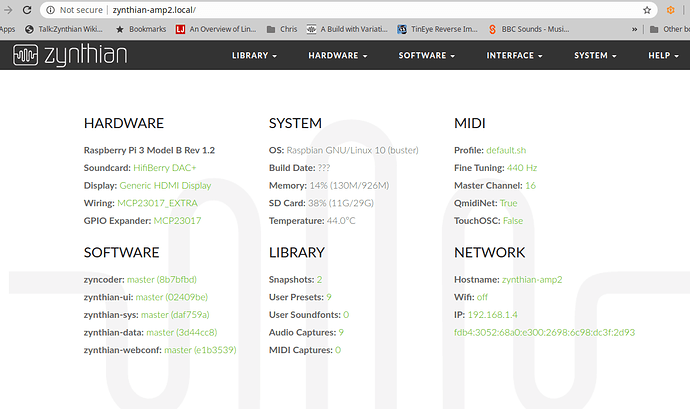 and you can also see the MIDI structure in the Zynth that supports all this. as you can see you can have many different midi set ups stored for all kinds of different occasions and these are worth investigating… Transpose everything on channel 5 up by an octave. . .? It can all be done.

I’ve had a couple of MIDI howl around issues but that’s only in the ridiculously complicated infrastructure I run here at wyleu towers. . .One of the issues that can (possibly) be causing problems is the Local ON/OFF Switch on the Controller itself. There is a certain level of MIDI control madness that starts wanting to treat the keyboard and the sound production bits and pieces as two different entities and if you mix in external control from some other MIDI source then the process of what talks to what starts to assume rather than the nature of an ordered conversation as the start of a bit of a party!

I hope This helps you build a Zynth MIDI set up that helps you make good sounds.

Hi,
I uploaded a picture here

Currently im experimenting with the Zynth. I thought to use it as Stage piano for rehearsals at home, cause I mostly leave the RD2000 in our Band rehearsal room. I alao have have a A-88 for use at home. I feel a slight difference of the keybed to the RD2000, but I like both. A88 has Ivory feel and may be slightly harder than Rd’s. Rd is more direct.
I use a Kronos as second board for live.

I use a Kronos as second board for live.

Any chance of an upload of some sounds?