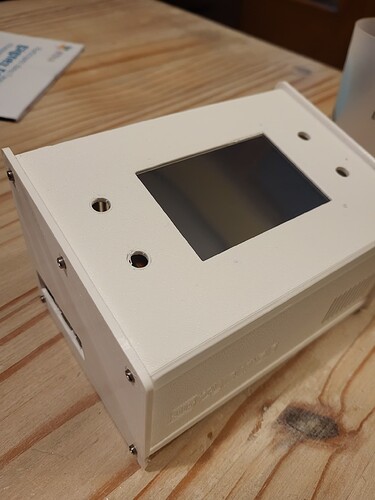 I had the same problem with my Waveshare 4" MHS and did some experiments with the zynthian UI config (where was it?), but I think I eventually just used the calibration tool from the admin menu. (I may check again, if necessary.)

There is an issue with calibration tool and screen rotation. Usually when someone describes axis inverted the actual issue is rotation of display relative to touch sensor. I have fixed the calibration tool but am offline this week so cannot upload the fix.

Hi @Flourdeau ,
Look at
/etc/X11/xorg.conf or /usr/share/X11/xorg.conf
If there is a 99-calbration.conf, edit the file and try to add

No need to reboot your Zynthian box

If it doesn’t work, you will have to play with TransformationMatrix

Calibration tool has now been updated on testing branch to handle screen / touch rotation. It does not (yet) support single axis reversal which still requires the “SwapX” or “SwapY” option set. I have plans to add an extra cross-hair to detect axis reversal and also to add a method of setting the initial rotation within webconf (which will make it easier to subsequently calibrate the screen) but maybe not today…

Many thx for your advices, but it doesnt work

So, i dont use so much the touchscreen function.

Hi
I’m in the same place today, I tried many things last night, and still stuck…

First attempt was to change the extension of the waveshare overlay to .dtbo which doesn’t work, the screen stays black even though the synth boots up correctly

So then I installed the official waveshare overlay that I’ve already tried on raspian and works well, and here it seems to work fine but Zynthian won’t boot as the StartX command return an error : no screens found… and i couldn’t find a solution then

So finally what is kinda working now, I copied the new overlay created from this driver install, called ‘waveshare35b-v2’, reformat the sdcard with fresh install, and put the file in the overlay folder.

Now same as you, the touch is inverted and all the options I tried, within the webconf or directly within the files, seems to have no effect…

The worse is that I did build this Zynthian few weeks ago, and had to reflash the card for some reason, but before that I did got it to work perfectly and I can’t remember how ! So… there is a solution somewhere, just gotta find it again !

How did you get the screen to show something ? Which overlay are you using ?

So there at the end I’m using the new overlay file from waveshare, and to get the touchscreen on the right way I modified this file “/usr/share/X11/xorg.conf/40-libinput.conf” like this :
Section “Input Class”
Identifier "lib…
MatchIsTouchscreen “on”
Option “CalibrationMatrix” “0 -1 1 1 0 0 0 0 1”
… (the rest is not modified)

The touch calibration in Zynthian should create the right transform.

Unfortunately it did create some transform but not the right one, maybe one axis was still wrong I can’t remember now, i also tried it after I got the orientation right, cause it’s not perfectly calibrated but the result was to make the axis reversed again… Maybe there’s something with the waveshare overlay, I’m not sure to understand well enough how those work

Maybe the fix is in testing and you may be using stable.

Oh is there still development of the OS ? I think the build I have is from 2021, I took the last stable didn’t find anything else

Also, I would really like to use it with my mod synth, I saw few topics about it but nothing too precise, is there any software option yet to use CV inputs for changing zynthian parameters ?

I have few ADS 1115 which allow 4 analog inputs through I2C, thinking it could be a way of getting those CV in but then I didn’t look about the soft part, I’m more an arduino person than raspberry, gonna have to do some research !

An other way that should probably work, and maybe easier, for me anyway, would be to make a module which take all the CV in and send them out as MIDI CC, ask the Zynthian to learn which parameter it affects…
Now I realize it might not be as easy cause there is some params I would like to control with those CV which are not in the zynthian interface but directly within the synth softwares, like maybe the waveshapes and all those little details, so the learning would probably not work

Also, I noticed quite a few parameters that can be changed by the Zynthian interface don’t seem to make any change in the sound, especially for the ZynAddSubFX, how is that ?
And is there a way to change the layers parameters ? Like, replacing “panning” in “main” with something else or even adding a new line ?

Ok, I found how to try the testing version, and unfortunately as I wanted to have a look on different UI, I took the last one on the list, can’t remember it’s name, but now nothing’s working anymore, I guess the easier would be to start again from the beginning ^^
Thanks, sorry for all those questions and also not being on the proper thread for this

I´m having the inverted XY axis touch issue after re-burning the SD card with the last stable version.
the calibration tool as no effect, even after adding the SwapX ,SwapY or Swapxy=1 options on display config:
PiScreen3.5(V1)
dtoverlay=piscreen,speed=16000000,rotate=90,swapxy=1,

any new fix for this issue?

You’ll have to deal with TransformationMatriw:

open the sd card in the pc and change the code in that file directly?

Try screen calibration. It should do the transform for you. (If you can get into it. You could try using VNC to navigate to it.)

Hi @riban
It was the first thing i did.
i will thy with VNC

can’t find the 40-libinput.conf anywhere on the SD card

after some terminal lessons i manage to edit the file but no change.
Hardware issue maybe? 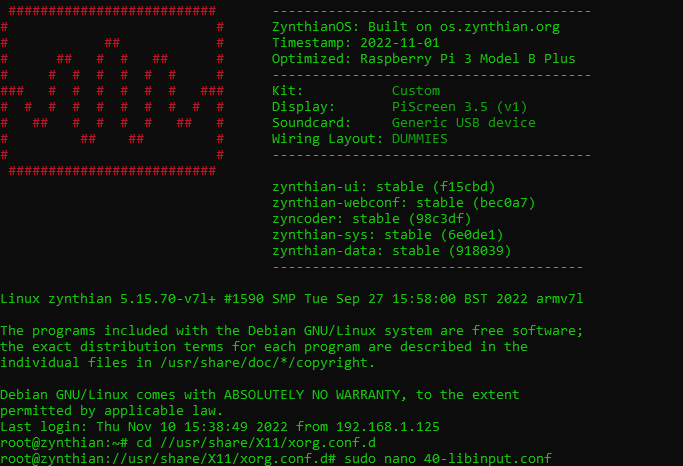 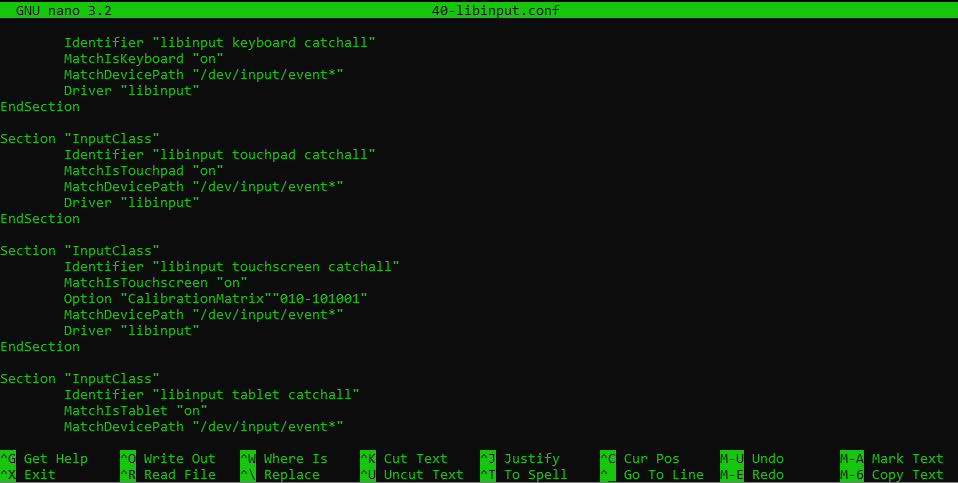