This is a work in progress. I promised to give somemore information about it.
Here’s a short video (better than words !) :
zynthian Harp

Have a good day !

So many questions, but just undying admiration. I know how these things form in your mind and the realisation teaches so much!!

Stll only five audios? and how long to plug all those usbs?

Yes, five arduinos ( 9 strings for 4 arduino, 8 strings for the last one) : 44 strings. I was about to buy the pianoteq licence but the lower last 3 strings doesn’t work (because they are lower than a standard keyboard can play). That’s weird because they sell a “concert harp pack” and those notes are common on these instruments…
Anyway, I still have to plug usbs after zynthian boot. I still have some issues : 1 of the five arduinos usually don’t work. Most of the time i have to unplug/replug or reboot arduino but it’s fixed in a couple of seconds so no major problem here. I’ll investigate. Maybe one solution is ti fire arduinos one by one using a sofware timer. I’ll see.
To avoid plug in arduino each time, I plan to use some kind of power management to fire them up once zynthian is up.

Thank you ! It sounds like an endless project to me but I’m glad to see the result.

Hello,
Here is a link to a new video (using organ layer) :

And I’ll try to log/add details there : 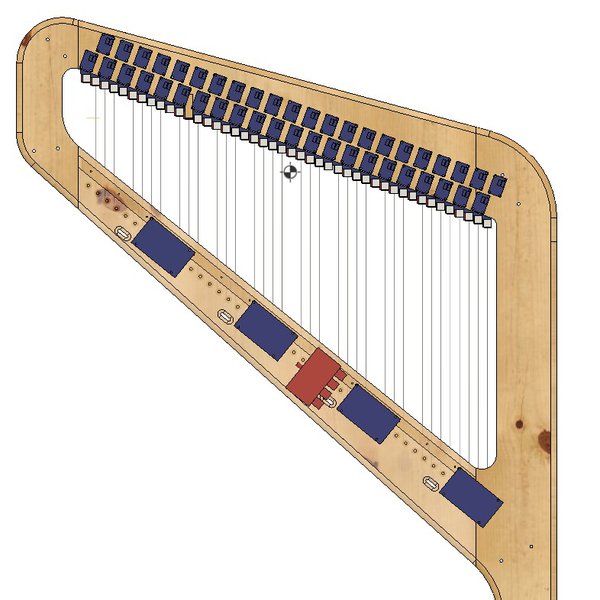 The goal about this project was to create a concert harp for my daughter. Designed on fusion 360 (work in progress). Strings are guitar strings. Strenght on ech string while pinching is monitored using cheap strain gauge (chineses ones used in...

For the Zynthian part the only place is here, of course !

Have a nice day.

I will never fail to be amazed by the imagination of people. I’d love to hear it with celeste like bells!!

This is truly astonishing!

Great work!
I’m looking for real string solution too, but more for zither-like instrument.
How fast you can strum your harp without issues?

@chux . the strings are not meant to be strummed (because I need to debounce to prevent ghosts events). That said, I think that it’s possible to play that way using short cushioned strings. In your case it could work with rubber pads on the neckboard ?

It’s more a reagge, but i like the video … and i’m pretty sure that more than one @zynthianer knows the tiny keyboard featured in the few first seconds …

Yes, I thought in that direction. I’ll try this with sensors soon.

That’s simply brilliant…
I’m impressed by the quality of you (complex) work… Not only making the hard, but taking the time to draw the images for the hackaday too…

Thank you. Lots of interesting ideas here and on websites like hackaday. I like the idea to share the knowledge so, posting about my work was the least I could do !

Hello…
May I have some information about the sensors you used for each string ?
Have a nice day…
Thierry

Hello,
I think that most informations are available on hackaday.
I don’t remember if I gave those extra informations so I do it here :
I use AD620 amplifiers (around 3 euros each on famous chinese component supplier) because they are analog wich means that the sample rate will “only” be limited by the arduino. Afordable digital amplifiers were (that may be wrong now because it was 1 or 2 years ago) limited to 80 Hz samplerate, wich is not enough.
Note that I had to replace a variable resistor on each AD620 board because adjustment range was not appropriate with the original resistor.
Strain gauges are 4 wires ones. This is a"load cell" assembly used in weight machines. I use 10 kg ones but 5 kg one should be fine (this has to be tested !). 2-3 euros each.
To get an acceptable response Vs frame strain (not to break the wodd frame), I originally tuned every string between 100 an 200 Hz. I can’t precisely say what is the load on each string because I gave up with the scientific way (as it didn’t worked !) and played directly with scale and zero adjustment while the string was loaded. String in an horizontal postion, physical string tension set (between 100 and 200 hz, no need to touch this later as it will be done the digital way), using zero knob on the ad620, I set the reading to be at 1/3 of the overall range.
Then, I attach a 500 g weight in the middle of the string and I set the reading (using the scale knob on the AD620) to the max. Be carefull, as AD620 are cheap amplifiers, setting the scale will also move the zero (which is not the case on “professionnal” (and uncheap !) amplifiers. So, you’ll have to repeat the process “set 0, set scale” several times for each string to get accurate reading. This can be annoying but has to be done only once (I’ve done it a year ago now, as string tension adjustments, never touch them after as I only worked with the software).