Just back from Battlement 2020, “all that’s new in contemporary population control and statuary” . . . 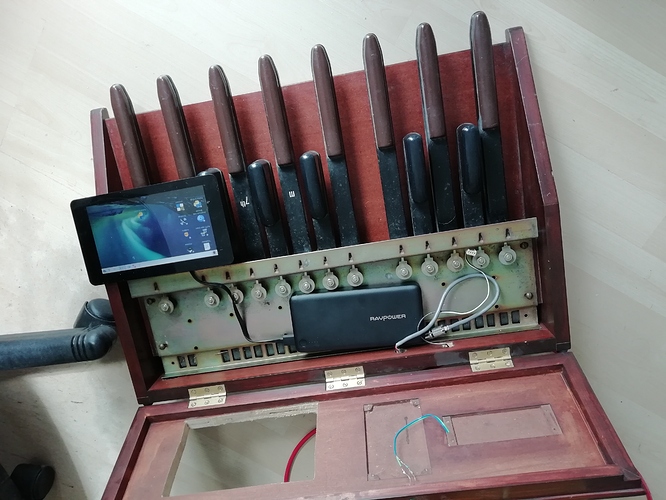 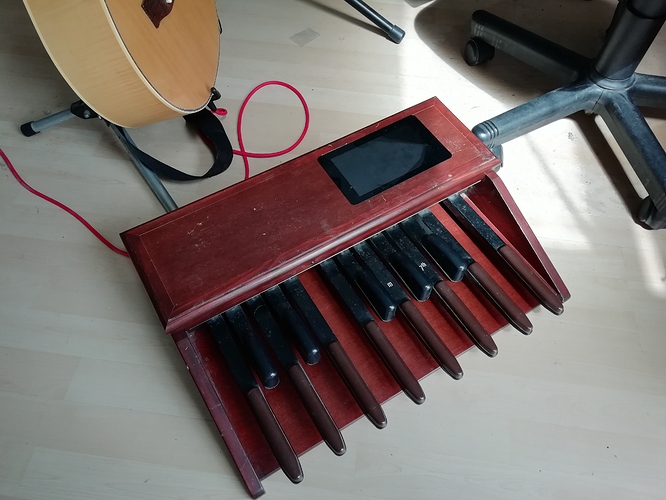 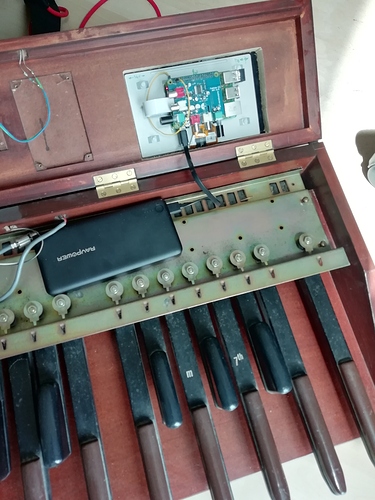 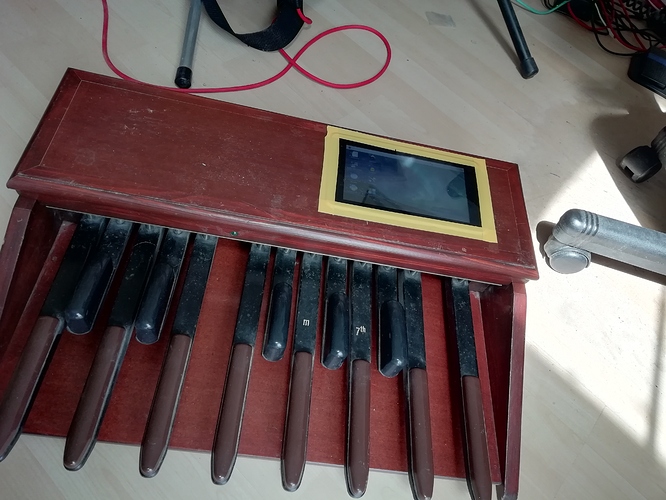 It is little more than a clever 7" Pi 2 ( yes !) box at the moment but the plan is a reasonably obvious…
and it’s a source of great joy that the Pi can carry an audio injector audio card on it’s back and it doesn’t interfere with the case !! I wasn’t going to 3D model it

Anyone any thoughts on doing a normally closed 13 note keyboard on Pi GPIO pins?
I

How do we set that up in the software?

Presumably it can be done for encoders it should be able to cope with 13 Reed switches and a decent bit of code. I don’t know if python could cope but I’ve got get the switches first cos they is literally on a slow boat from China. Running a process as a system to servicectl should be able to do it but the other alternative is auduino but I’d love to keep the number of active devices in the box down to a minimum.
Presumably if it can present itself as a Midi device to jack then everything should just work. The arduino would probably talk over i2c and that would be a bit more involved…
I’d also like to break out i2c to a allinone in a small box with encoders that I could mount at hand height on something small or a music stand with a vnc tablet.

I’ve already booted it up to a pi4 4g and put on an audio injector zero which gives me a bit more space. Ideally I’d come out of the box as balanced and unbalanced with stereo jack input. It would be a good idea to provide a bypass switch that in the event of zynth reboot could at least pass through the audio to the output but without the zynth jiggery poker but it should be able to

Not bad really for battery power is it can be managed…

Isn’t this just the exact same thing as CV on gpio inputs? Put down your pedalboards and pickup your inputs!

No, it’s going to be normally closed reed switches that go open (ie. internal pull up resistors on the PI inputs). No CV involved, just closures and pull ups.

And you will read the screen from human eye height ?
And do you intend to turn encoders, (or even touch-screen) with toes ?
Why don’t you simply turn your pedalboard into a midi controller and plug it into Zynthian’s MIDI in or USB ?

Well it’s a 7" screen and the experiments I’ve done seem to be ok from the legability point of view. You really just want to be sure whats on the encoders and have you got the right patch

I’m probably going to bring the encoders out on a connector and put them and an all in one board in a box remote from the device at hand height, but I’ll use vnc initially to a separate android tablet.
I’ve left space for encoders at pedalboard level but I’ve used a roland looper pedal RC-300(?) the triple looper and bending down to adjust things doesn’t really work. I just want the touchscreen to allow visual indications as to what is actually going on. I might wind up the font to make it a little more legible. This is for use as a cable hub for open mike sessions, I can take my stereo guitar output into a T/S 1/4" stereo input and from there into the audio injector, the output will go out on two mono 1/4" inch TRS sockets and also passive transformers (OEP Z3003/E) that can feed balanced cannon connectors which will cheer up the drummer who does the mixing.

The idea is to have a completely powerpack powered zynthian that will just send two audios to the desk, and with snapshots handle the guitar and pedal board

Options for pedals et all can be added subsequently, as it develops.

Mind you I’ve got to get the Pi4 working with the touchscreen and thats a bit of a game at the moment !!

How did the ZynthHarp do it?

That’s an interesting approach. Possibly scuppered by normally closed unless I get clever with steering diodes. Probably a good idea to dig into the code.

n/c or n/o shouldn’t make much difference. If you have sufficient pins for each switch it is a doodle. If not you can matrix them with diodes or use anothe processor (STM32, Arduino, etc.) to do the acquisition and interface via serial, e.g. I2C. You could even use the same GPIO extender that the official Zynthian uses, e.g. MCP23017. All are documented in some form here.

If you use an Arduino (cheap and small and sacrifice-able!), and you do not need MIDI in via 5-pin DIN, you should be able to use the serial RX/TX for MIDI, bypassing GPIO completely.

I integrated my Zynthian in my ‘live setup’…anyone would like to see some pictures of that ???
And @wyleu, wouldn’t you think your post deserves a little

As has been revealed in the recent battlement 2020 opening address from Barry “thumbscrews” Mesure, there has been a worrying increase in presumptive

requesting that has lead to all kinds of administrative chaos and one or two unsettling incidents of false flinging…
So certain people ( dearest @Vincent…) should be careful about such over enthusiasm, unless of course they are keen to explain their exuberance to the the ever willing “zynthian re-educators” and their fine, newly acquired set of implements from the give way bags, so thoughtfully provided by the battlements 2020 exhibitors…

Pictures it will be then ! 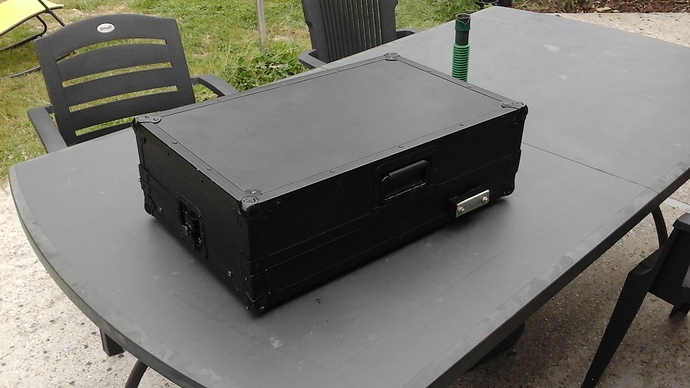 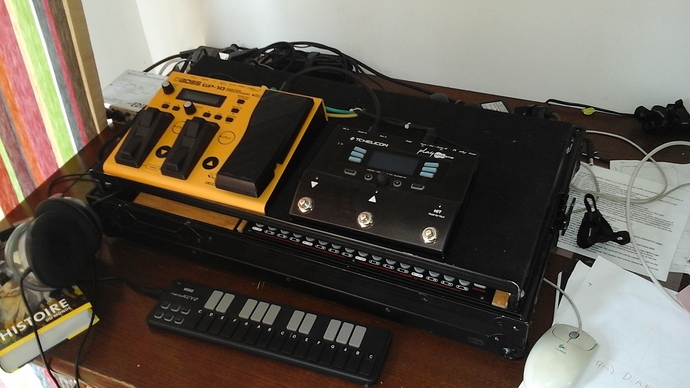 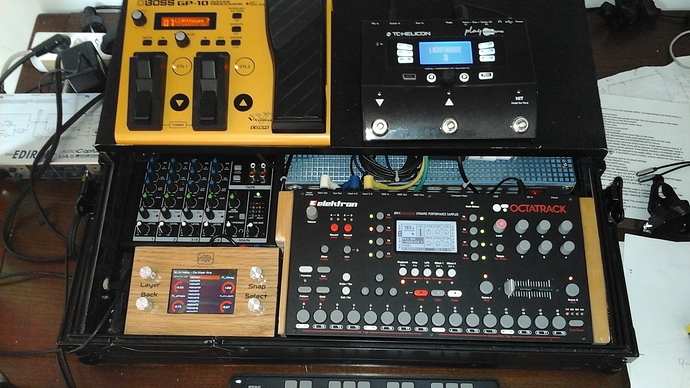 So that’s Boss Gp10 (guitar) and Zynthian into the Octatrack, Octatrack and TC Helicon into the Mackie Mix8, leaving space for invited guests.
Very simple, very effective, I only need to plug in the 13 pin guitar, the old SM58 and there you go!

That’s rather nice!! but do you find yourself bending down or assuming a reverential kneeling pose in front of it? How modification do you do during performance…? 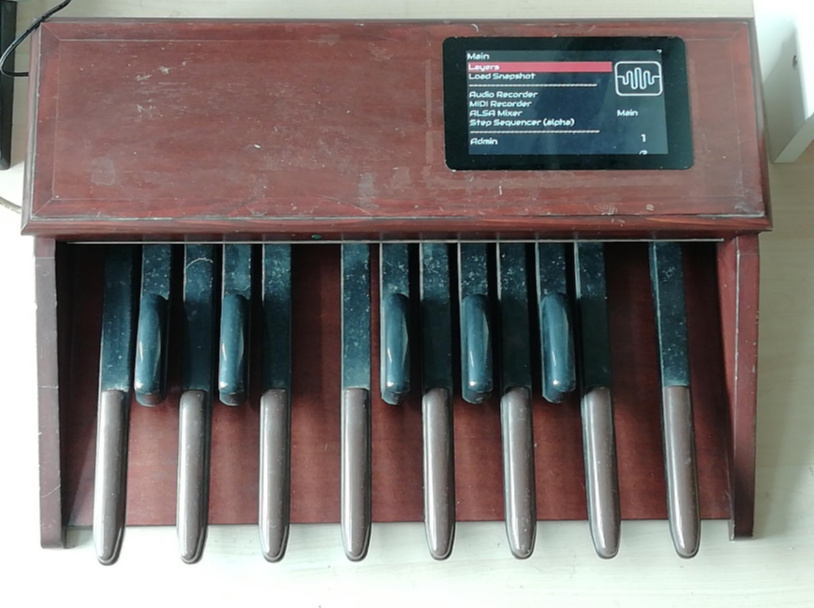 I find the screen entirely readable from a standing position, Althou’ I have upped the font to 24pt.

No, the whole setup is at waist level; I don’t use use the footswitches of the Boss pedal, I either use external switches on the ground or the homebrew (ofcourse) control panel I Integrated in my MIDI guitar, allowing me to control the GP10 from there. 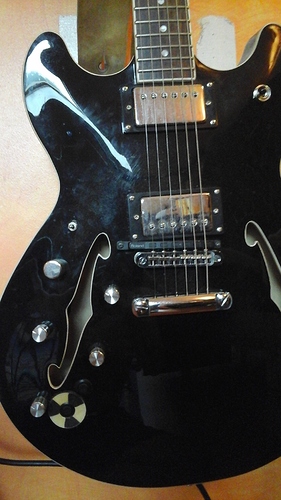 I used the Roland GK pickup system for that. And when I choose to play rock or blues I simply take a small pedal board with a few Effectrode pedals, the TC helicon (the only not fixed pedal in my setup) aswell as one of the electric or acoustic guitars. You see we play two types of sets; one acoustic / electric with a real drummer and all, and one more electronic orientated (which brought me to this place so to speak).
I’m sorry I did it again, just talking about my stuff, it’s not (only) bragging, I’m passionate about music, equipment, tube amps, Rhodes, beer wine, V8 engines, wimen…oh yes I’m your regular Dutch cave dweller ; -) 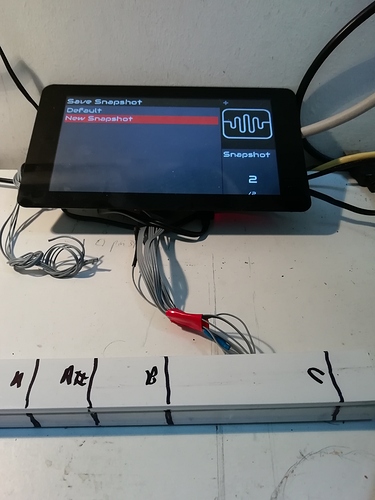 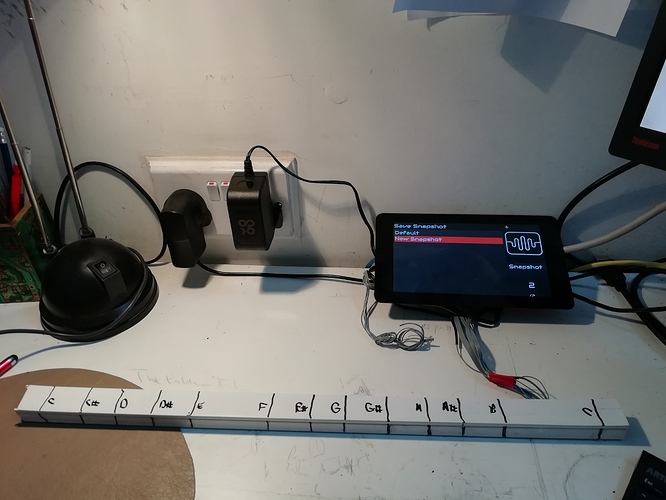 The switches are buried inside the trunking at carefully aligned distances so I can operate them with a magnet.