Alternate Simplified Controller for the rest of us

Those who didn’t spend countless hours in their youth learning piano and music theory may be in awe of those who can improvise melodies and change keys on the fly.
Something with a single key or simpler scale may be more comfortable for for the casual player.
(In a new video, Jordan Rudess describes discovering his gift, first improvising chopsticks at 7 and auditioning for Julliard at 9, he’s not one who needs a simplified instrument) 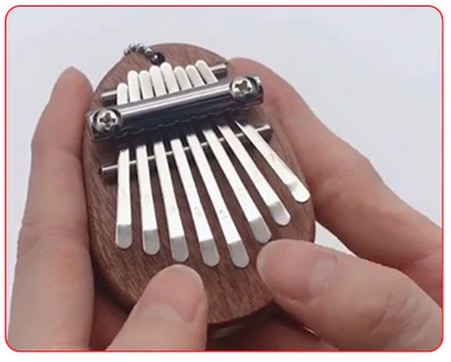 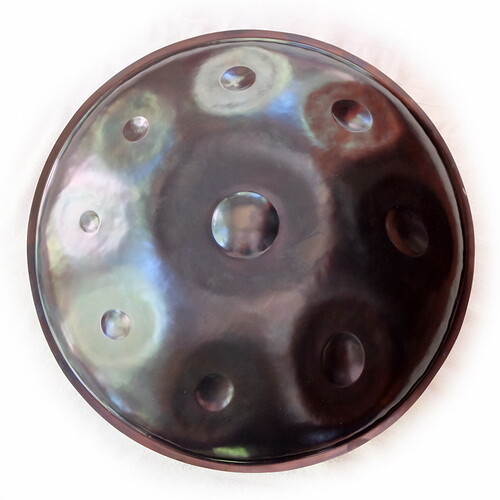 A Hand Pan1200×1200 243 KB
A coupe of examples, using alternate thumbs works well with the Mirimba’s tuning.
The Hand Pans played by professionals are quite expensive, (not practical to have one in every key like harmonicas)
The one shown has SALADIN - Tuning: D / G A C D Eb F# G A
Pianoteq has a Hand Pan instrument, which you could trigger from your keyboard’s drum pads to get a more authentic feel for the dynamics.

Simplified scales that have been used in popular music include:
Heptatonic scale 7 note western scale C D E F G A B C…
The Pentatonic 5 note sub scale C D E G A C… (omits tense 4th & 7th from major scale) has appeared in a number of popular songs. (the 5 black keys in a piano octave are in a Pentatonic scale) 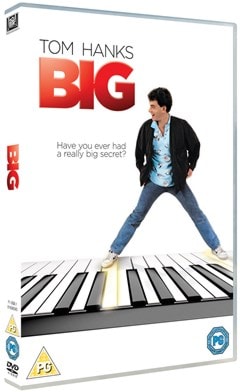 Bobby McFerrin plays the audience, sort of like Tom Hanks in Big, to illustrate the Pentatonic scale in a panel discussion.

The Theremin looks simple at first, but unlike simplified instruments limiting your note choices, you have infinite choices with a Theremin, they are a challenge to master.
One DIY Theremin I recently noticed is the “Altura MkII Theremin MIDI Controller Arpeggiator DIY Kit” 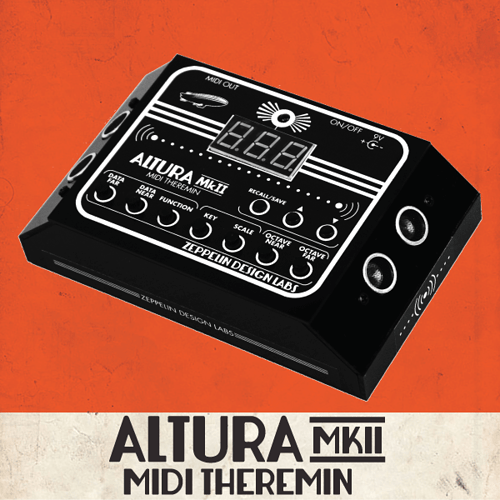 Another commercial product I just ran across is the Orba, puck shaped music maker. 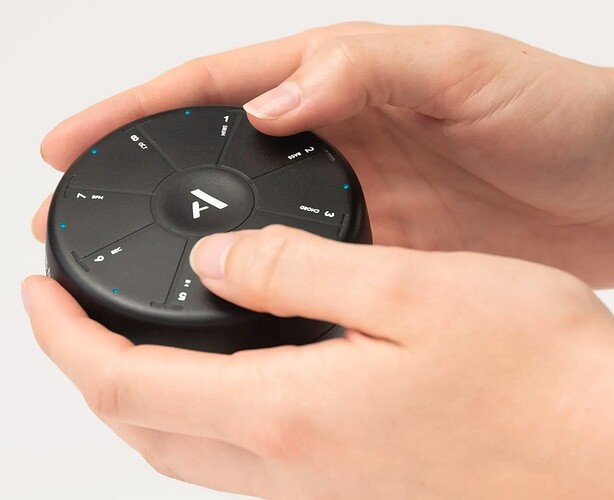 One of the countless projects at Adafruit was the Trellis M4 Expressive MIDI Controller kit. 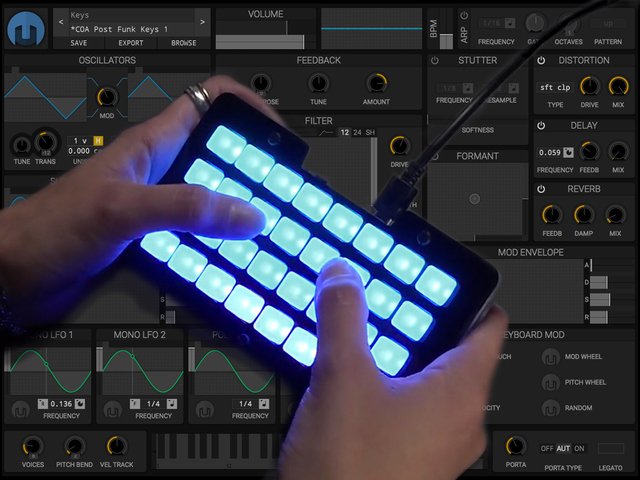 With an 8x4 switch matrix as well as motion sensing.

I just released the ZynFace kit, that includes a funny feature that can be used for implementing something similar to the ALTURA on the zynthian:

I’ve not publicited the release too much because documentation is not ready yet, and i would like to improve the software and make some nice video. Too many things over my desk …

Hi @zynthianers! I would like introduce the new funny toy i’ve been working on … jejeje! [ZynFace] First, a quick & dirty video with the current prototype, that is almost finished and ready for production: Yes, the tablecloth is a gift from @C0d3man … i know you know that

As you can see, i’m controlling the zynthian with a SQ1 (analog sequencer) using exclusively CV/Gate signals. Amaaaaazing!!! These are very good news for modular/eurorack lovers, among others, jejeje!! Th…

A couple of projects I have seen out there. 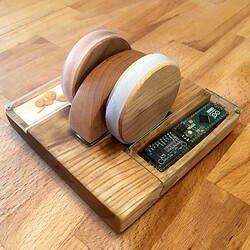 standalone pitch-bend mod wheel USB controller2915×2915 2.13 MB
A Flintstones style Pitch-Modulation control, using an Arduino Computer and and external ADC. (A modern 32 bit microcomputer board for $6 can match this with their built in ADC converters. In fact the SAMD21 I have been using (also used in the Raspberry Pi Pico) has a 12 bit ADC that can be oversampled for up to 16 bit resolution, at the cost of speed.

Someone put together this demo of the Accelerometer built into cell phones, being used as a Wah Wah Pedal by strapping the phone to one’s foot. I believe the demo web page accesses an iPhone’s accelerometer with javascript.

Another pedal form I considered. 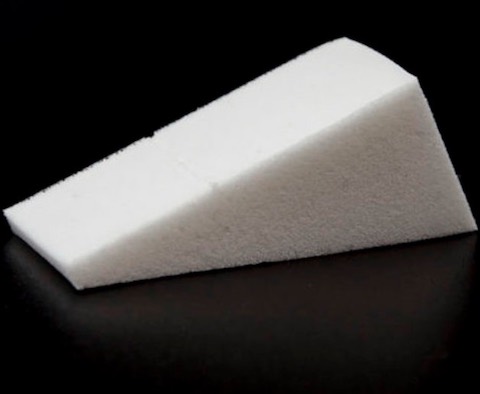 Providing you have some sort of motion sensor like a BLE fitness monitor, M5StickC or conference badges I have seen strapped to your foot, you would have a sort of parlor trick. (It’s guranteed that a gadget wired to your foot will end up yanking wires or pulling down equipment racks sooner or later, a more complicated and slower bluetooth interface is the way to go)
I tested a USB wired foot angle detector using $8 in parts. 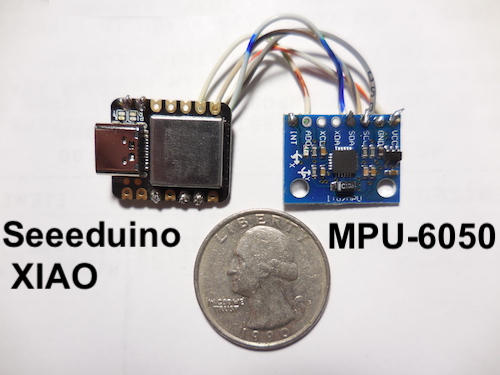 Testing it with the standalone version of the Vital synthesizer plugin.
Here’s a botched video demo. 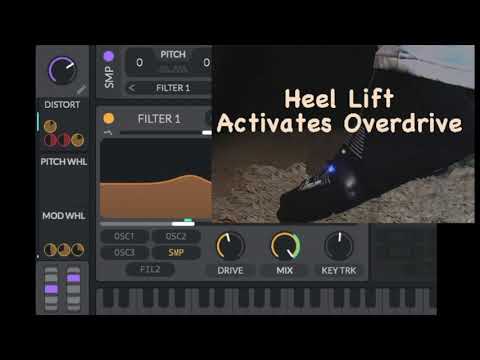 I learned that while the Vital mod wheel input accepts 14 bit MIDI control signals, the macro dials only handle 7 but res. input.

While I am mostly interested in making expression controls.

2 sensor tests820×267 41.1 KB
I previously posted a cheap USB breath control sensor and the Wii Numchuck with a simple to use I2C inteface, I got a couple of these in a Walmart clearance for $3, is there a problem with candy apple pink?
With 2 pushbuttons, a joystick and accelerometer, it might be useful to select patches, etc. A pro might no want to look like they are playing Guitar Hero in a paid gig…

I did make this test using an IMU attitude sensor for note selection, Along the lines of the Altura-MIDI-Theremin’a arpeggiator, I adapted a Harmonica Diatonic scale to globe shaped input device, hoping the shape would provide a stronger position reference. 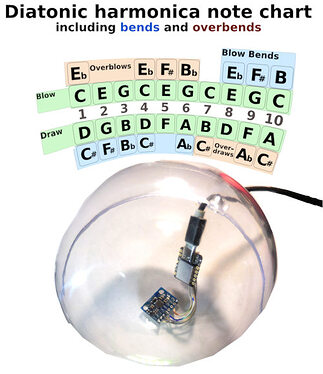 This is using the same $6 computer and $2 IMU sensor as the pedal experiment. I just ran across a nicely packaged driver for the MPU-6050 that includes code for the internal DMP (Digital Motion Processor) that applies sensor fusion to provide a more steady output. This special code typically had to be requested from the chip maker (not using your gmail address) this library makes it simpler to use. This code can output QUATERNIONs a complex system that can represent angles. (Normal XYZ Euler angles are subject to “Gimbal Lock” a singularity condition that drops data.

Quaternions used in science and video game design uses 4 units of measure to avoid gimbal lock, (the math is incomprehensible to me, thankfully there are friendly conversion routines)
The simplest motion sensor, like cell phones and the Wii Numchuck uses is the Accelerometer, which despite the name are best for measuring static orientation. The name sounds like it would be used in inertial navigation like ships and planes use. But these micro machines are not accurate enough, error quickly accumulate in the double integration calculations, they are OK for sensing quick gestures. 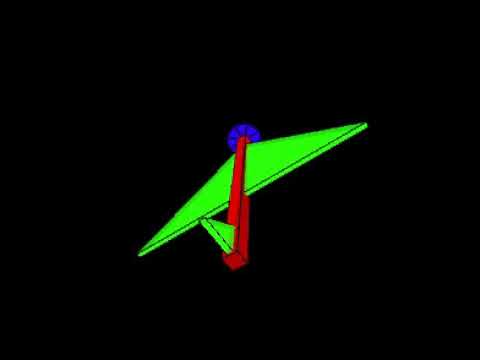 The “Teapot” demo using a simple 3D plan is included with the MPU-6050 driver, I tried to go through the 3 Axis Roll-Pitch and Yaw, most noteworthy, the sensor fusion processor provides a stable Yaw (heading) despite having no stable reference, it’s just counting up gyro changes. The demo is using Quaternions so one should not be able to induce gimbal lock.
Accelerometer compute orientation by referencing earth’s gravity, which makes a static sensor appear to be moving away from the surface at 1 G. This is good for Pan and Tilt angles (in aeronautic terms) but the Yaw (heading) doesn’t have a stable reference, 9 degree of freedom (9-dof) sensors include a magnetometer, which allows magnetic compass headings to be read. The vintage MPU-9250 is an example 9 DOF IMU that includes a 3D magnetometer. They can be bought from China for about $3.50, a newer example, the TDK-InvenSense ICM-20948 who’s internal motion processor can do sensor fusion at 200 samples a sec. is available from Sparkfun for $16.95, it includes the new emerging 5mm Qwiic I2C connector standard for those who hate to solder. This tiny JST-SH connector format might be useful in compact Pi Compute Module 4 Zynthian host board designs. 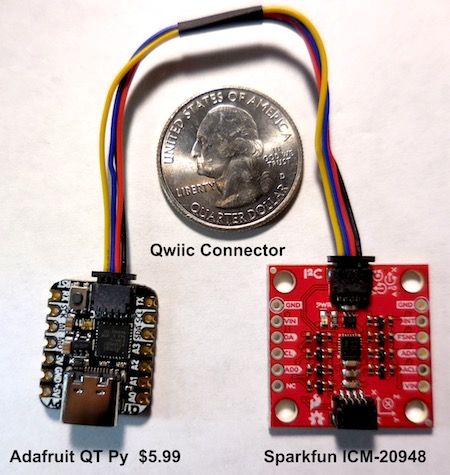 The tiny Seedstudio XIAO shown in some experiments above “the world’s smallest microcomputer” that lists for $4.90 has a better competitor (both selling for $5.99 at a local dealer) > The Adafruit QT Py, it’s a pin for pin compatible design with some advantages:

The “time of flight” rangefinders remind me a bit of a smart gesture sensor chip (with an IR light, 90x90 cam and dsp) recognizes a few gestures. Not suitable for timing critical stuff it’s more of a control panel thing, I believe the rotation sensing can count revolutions (it contains some 80 registers)
It’s plugged into a BBC microbit, that little board they gave every 12 year old in England as a learning aid. The $10-15 board has bluetooth and an accelerometer and galvanometer.

A tiny (65x25x15mm) all in one computer good for a Bluetooth/WiFi controller w/ IMU. The M5stick 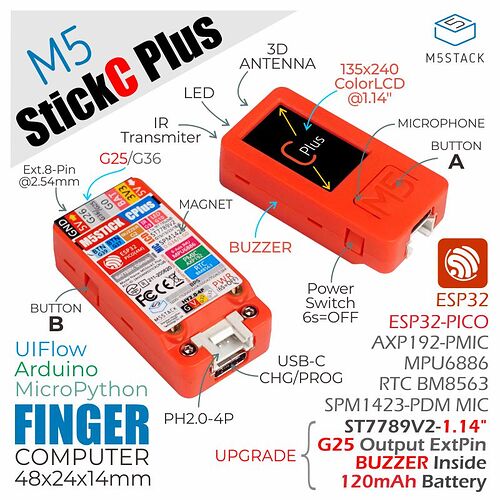 m5stickc_plus_01800×800 124 KB
It’s a pretty good value, you can find original M5stickCs for $10-$15, ($15.50 Plus model Amazon FBA) the well known bargain ESP32 processor is at the heart, while it doesn’t have native USB-MIDI like some other processors, the wireless options more than make up for it. You can get a watch band to make a poor man’s AppleWatch for minor on stage remote controlling.
The short life tiny battery is sort of a joke, only 2 user buttons, IO Pins are limited, though there is a family of add-on block modules. the upgraded M5stickC Plus has a bigger battery and slightly bigger display. It has a Grove I2C connector, which is pin to pin compatible with the mini Qwiic connector, with an adapter cable.
Baggypants March 17, 2021, 9:13pm #6

I don’t think this is midi 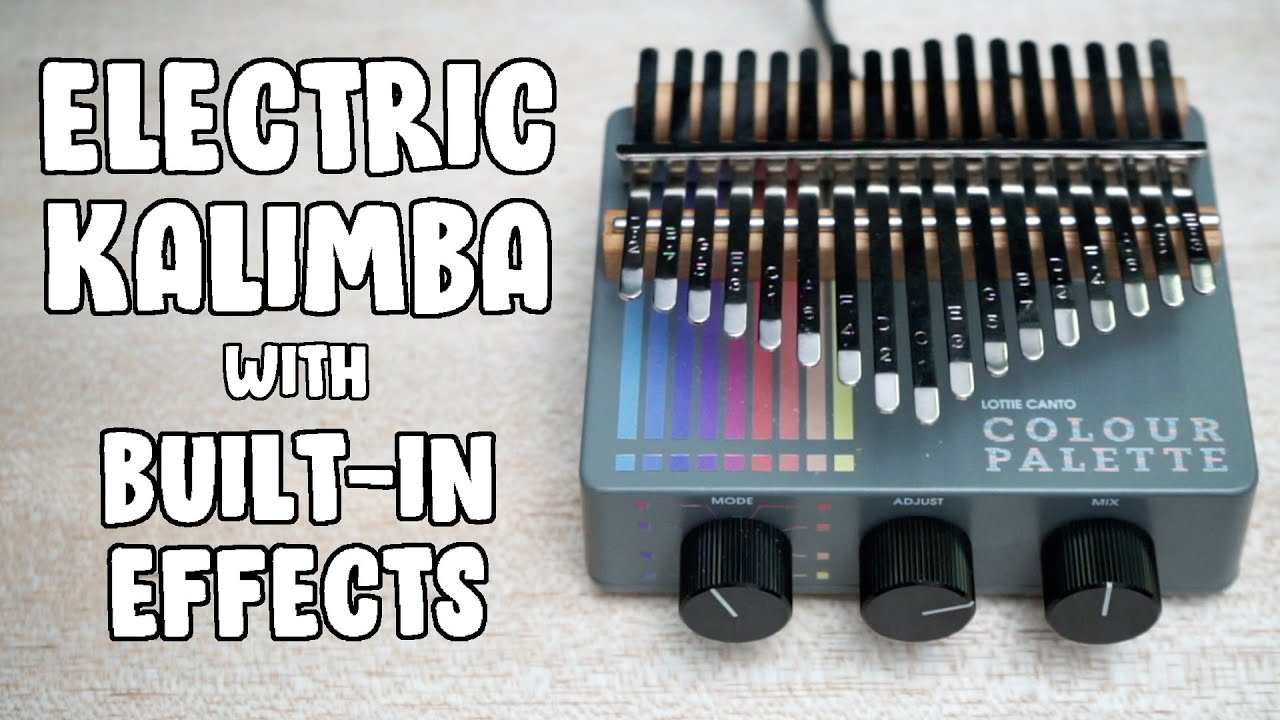 Really cool!! As some of you probably know, I love kalimbas

Jofemodo used has electro-Kalimba to test the Audio Injector input back in 2017.

This electro kalimba project has a Teensy in it … so it could do midi over USB :>

I keep meaning to get back to working on an idea that I had where I’d take the load cell from a cheap digital pocket scale, a HX711, and a microcontroller, and build an expression pedal that would pretty much have no moving parts, but it has been pushed so far down the to-do list.
Along the same lines, I thought it could be fun to take an old Wii Fit Balance Board and make a sort of 2 dimensional expression pedal, since it has essentially a load cell on each of the four corners. Think of it as the giant piano from the movie “Big” meets a Korg Kaossilator:)

I just received some HX711 in the mail today, costing about $1 each, apparently some real pedals will stay where you position them, displacement is one of the feedback mechanisms, a solid block with strain gauge might not be as good as some added elastic that compresses.

Not a controller either but an interesting experiment for ambient. Beautifully made. For a starter I used a simple reverb tank and a Donner EQ Seeker equalizer pedal to get the same for a tenth of the price. 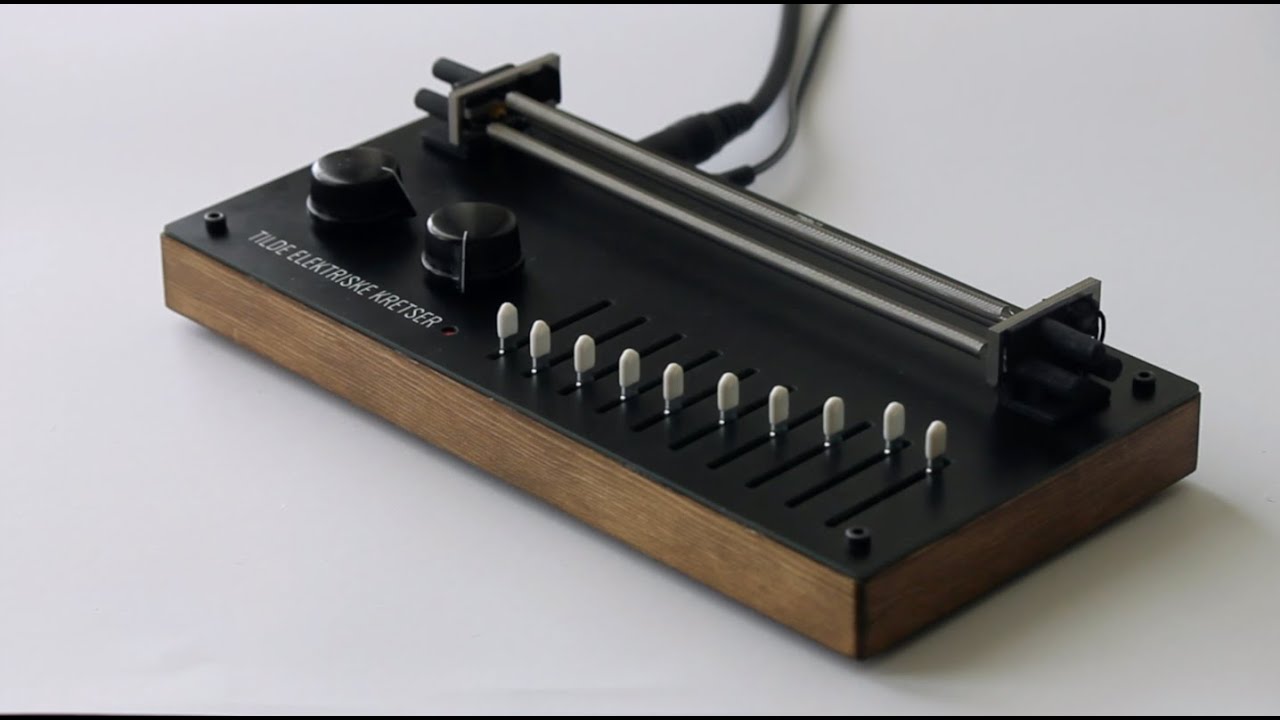 Noticed a combination electro Kalimba Theramin(?) combo in this Roli promo photo. Does anyone recognise the project (laser cut box with 4 tines near the Roli Lighpad Block) or any of the other projects? 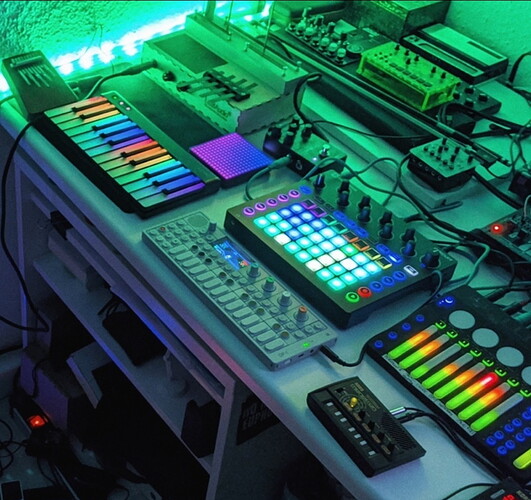 The search engines don’t know that image.
I did see a couple of other odd Kalimba concepts 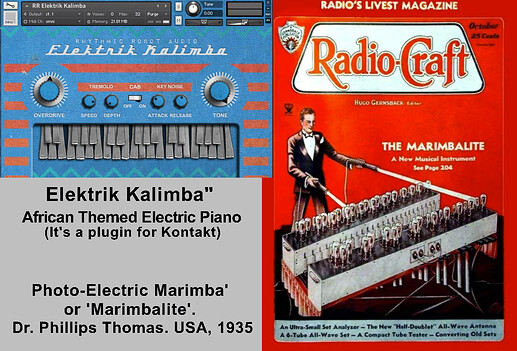 Odd Ksalimbs1200×814 341 KB
The Marimbalite (in 120 years of electronic music)
shares a light theme with the LazerHarp
that rozhok posted in the Success section.

One more wacky instrument from a site that seems to sell oddball effect pedals and instruments.

Another project I just ran across, a student xylophone, modified for BLE remote control with a $20 bluetooth board, 6 driver chips and 30 solenoids. 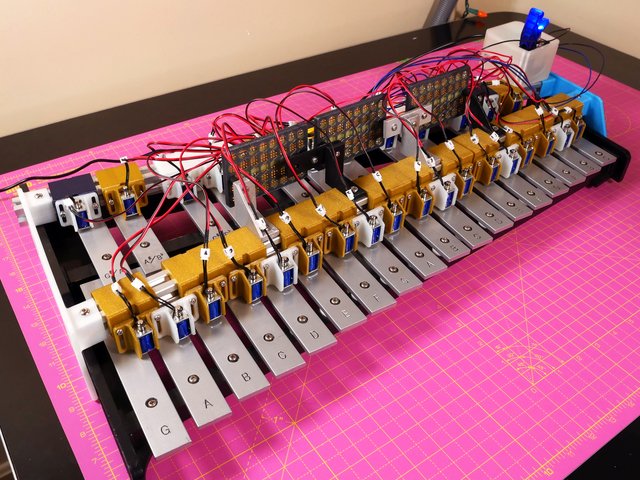 Well, THAT was quite an adventure! When I saw this post, my curiosity went to 11, too. Don’t ask me to explain how I tracked it down, but apparently, it’s a LeafAudio Microphonic Soundbox.
Here’s all the details plus a video -

I’ll have to get myself a violin bow…

The power of google is strong in this one!

I think the element of musical curiosity and adventure is what makes this community a bit unique. Thanks a heap. I like the rabbit holes that Zynthian leads me down

A Better Look at the Pipe Guy’s Rig. 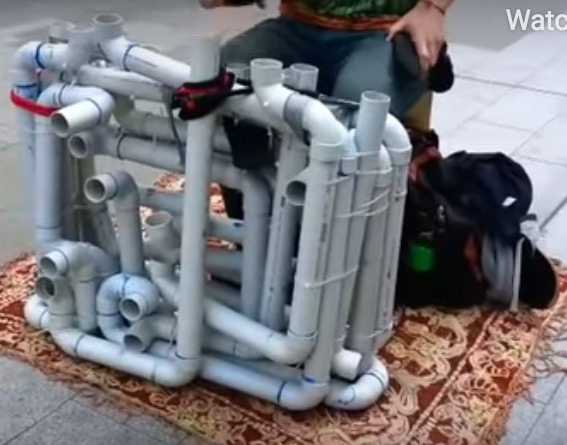 One of his more dynamic videos was previously shown in Music is the Best, this POV video gives a better look at the 15 note player end of one of the more successful simplified instruments. (There are 27 videos in his channel) 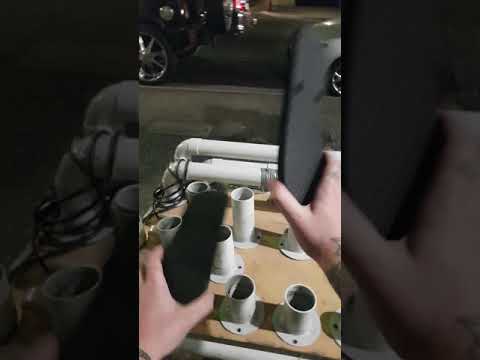 To identify the scale used, I had the last 32 seconds of that other video: Pipe Guy - House/Trance/Techno Live - YouTube examined by pYin ‘Notes’ analysis in Sonic Visualizer: 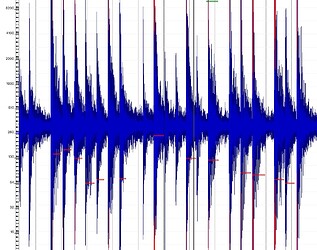