Perhaps it’s time to think about going 64 bits… Probably, it won’t be a straightforward task, so let’s start by drafting a route sheet and proceed step by step.

I would assume that we will keep using “Raspbian”, but i’m not closed to use other distros if we have good reason to do so.

I've created this thread to discuss and coordinate the technical aspects of migrating ZynthianOS to 64 bits. Probably, it won't be a...

Once the Kit v4 is released, and i can look the landscape, i would like to scale this to the higher priority …

Well we could have had a fanfare at least !!

Would this have any extra abilities or limitation in 24 bit or 96/192 applications?
I was asked about this yesterday.

Would this have any extra abilities or limitation in 24 bit or 96/192 applications?
I was asked about this yesterday.

I don’t think so … but 64 bit binary code should be a little bit faster to execute in many cases. I’ve reports from Moddart developers about Pianoteq improving by a 15%.
The price to pay is increased memory usage, but the new RBPis has a good amount of that …

Pianoteq improves by a 15%

Is that for ARM build. There is a statement in their README that states they only provide a 32-bit ARM build.

They told me about their lab tests some time ago …

I don’t think that faster code is the primary goal in going 64 bits. If you demand high processing power, you need to leave the ARM platform.

Totally agree with you, but the 10-15 % of extra performance is always welcome, specially for Pianoteq engine

Is that for ARM build. There is a statement in their README that states they only provide a 32-bit ARM build.

@riban, Yes, they told me about tests with 64bit ARM. I’m quite confident on Pianoteq people will release a 64 bit ARM binary in the near future …

Anyway, as @harry66 has set above, this is more a strategic move for not getting stucked on the past … Of course, we are not in a hurry, we have time …

For the moment, there is no rapios lite 64 bits, only desktop.
There is this information in raspberry forum : https://www.raspberrypi.org/forums/viewtopic.php?t=276586#p1691986
A script to purge all desktop program :

Great. You did the first step

Not exactly first step, because I’m thinking of installing directly Zynthian via script, but no luck for moment, pi is running, but nothing on my zynthian screen or hdmi display, webconf not working.

for moment I don’t know, I flash a new card and setup_system_rbpi_raspbian_lite_stretch.sh is running.
If fail, I will flash raspios and install all the program you put in the first step in desktop mod

You should be using:

Ah sorry I copy the wrong text, I used Buster 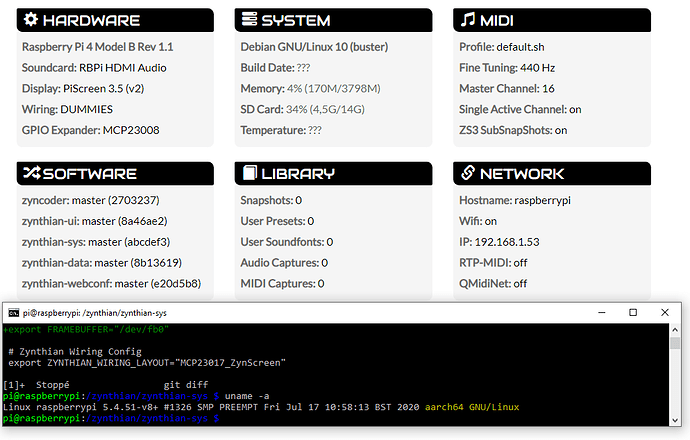 For the moment, on my kit 2, the screen is black, on HDMI it works.

We need to add in /boot/config.txt, don’t know what is needed but without the raspberry does not boot :

I test coder with zyncoder_test, and my coder works.

That’s all for the moment

On my Zynthian V2, I have screen, coder, soundcard working.

I test sound with test audio in admin, test midi seems to not work, same for engine but I don’t install all.

Now with the good kernel, I will try another installation.

I have a working zynthian 64 bits, just fluidsynth and linuxsampler which don’t work, I don’t look for the moment why.

1 - download and flash https://downloads.raspberrypi.org/raspios_arm64/images/raspios_arm64-2020-05-28/2020-05-27-raspios-buster-arm64.zip
2 - Put in your raspberry, boot and configure your wifi and activate ssh ( https://linuxize.com/post/how-to-enable-ssh-on-raspberry-pi/ ) I skip update since zynthian script do it for me
3 - ssh into your raspberry
4 - sudo mkdir /zynthian
5 - cd /zynthian
6 - sudo git clone https://github.com/lguyome45/zynthian-sys.git
7 - cd zynthian-sys/script
8 - sudo ./setup_system_rbpi_raspbian_lite_buster.sh
9 - take many coffee, it take long time to do the compilation but keeo an eye on the screen, at beginning there is some question for example for the kernel downgrade

After the compilation is finished, just go to the webconf to configure the kit, maybe update the lv2 plugins and normally that’s all.

@jofemodo in my branch I make modification in update_zynthian_sys.sh and eynthian_envars.sh to change fb1 to fb0, it’s easier for me to have hdmi output.

I will test tomorrow with less modification.

After a year of beta, it's time to open up 64-bit Raspberry Pi OS to a wider audience.